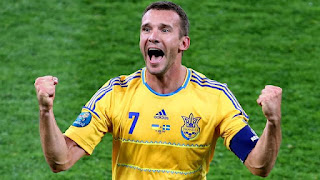 Former AC Milan and Chelsea striker Andriy Shevchenko has announced his retirement from football with the ambition to pursue a career in politics.

The 35 year old Ukrainian International captain, and record goalscorer for his country with 48 goals, lead the ‘yellow-blues’ to a quarter final place at the 2006 World Cup, attaining his 111th cap for his country a month ago at the European Championships co-hosted in his native Ukraine and Poland with man of the match performances in the tournaments group stages, made the decision yesterday. His first and last club Dynamo Kiev have confirmed the news on their website.

‘Sheva’ as he is known affectionately by fans said of his decision, “This could shock everyone, my future is no longer in football.”

Attributing his successes to his former coach and mentor at Kiev, Valeriy Lobanovskyi who too also played for Dynamo.

Lobanovskyi who died suddenly in 2002, played for Andriy’s beloved Kiev before he was even born from 1957-64, then returning to manage the side ten years later. He enjoyed two stints as Dynamo Kiev boss, the first a 16 year tenure from 1974-1990, however during his second berth in Kiev during five seasons from 1997 to 2002, he coached the side to the Uefa Champions League Semi-finals in 1999 with Shevchenko spearheading the attack alongside fellow countryman Sergei Rebrov, leaving the likes of Arsenal and Real Madrid in their wake as the Ukrainian’s charged to the last four of european club football’s elite competition.

This showing bested the previous seasons progression to the quarter-finals, where Sheva netted a hattrick at the Nou Camp against Barcelona.

It was during this period that I became aware of the emerging Shevchenko as one of the most potent and prolific goalscorers in European club football. A tally of 106 goals in 184 games was formidable.

As I myself sat up and took note, so too did some of Europes elite. Not surprisingly a team with the stature and heritage laced with european prestige came knocking as the 98/99 season concluded. 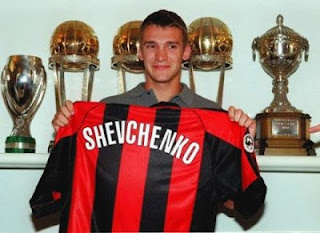 That team was Italian giants AC Milan, who forked out a princely fee in the region of £15million.

At Milan he continued his inspired form infront of goal, becoming only the fifth foreign player to top the Serie A goalscoring charts or ‘Serie A Capocannoniere’ in his first season, the other four members of this exclusive club are Michel Platini, John Charles, Gunnar Nordahl, Istvan Nyers, and Férénc Hirzer.

Despite a troubled 2002/2003 season, dogged by injuries, Shevchenko netted the decisive penalty shoot-out spot kick in the final of the Champions League against domestic rivals Juventus.

This was Milans sixth European Cup triumph and in turn Andriy Shevchenko became the first Ukrainian born player to win the Champions League. 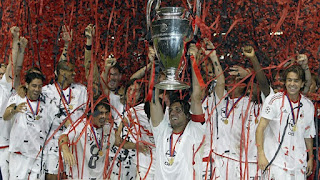 Following the victory over Juventus, Andriy flew home to Kiev to place his winners medal by Valeriy Lobanovskyi’s grave who died in 2002.

He again rose to become Serie A’s top goalscorer with 24 goals in 32 games, lifting the league title in the process, the Scudetto had eluded the red and black of Milan for 5 years previous.

The accolades continued throughout 2004, with Sheva scoring in the Uefa Super Cup against Porto and then netting a hat-trick against Lazio in the Italian Super Cup. 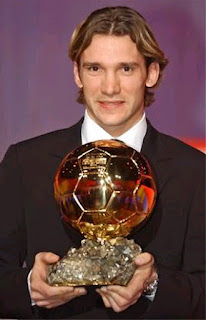 The year culminated in personal honours as he was named 2004 European footballer of the year, becoming only the third Ukrainian ever to receive the award behind Oleg Blokhin and Igor Belanov respectively.

Having missed several games during the 04/05 season with a fratured cheekbone, Andriy managed 17 goals, in addition to an unprecented four goal haul against Fenerbahce in a Champions League group game on November 23rd 2005.

This feat allowed Sheva to become only the fifth player to score four in one game in Europes top club tournament, in doing so he is in world class company with the previous four players to accomplish the milestone Marco van Basten, Simone Inzaghi, Dado Pršo and Ruud van Nistelrooy (while Lionel Messi joined that group in the 2009–10 season), and the only one to have achieved it in an away fixture.

Milan eventually succumbed to defeat in the final that year, with Shevchenko missing the crucial spot kick against Liverpool.

During the 2005–06 season, he scored his last Milan goal in the second leg of the quarter–finals as they eliminated French side Lyon after a last-minute comeback in a 3–1 victory.

Milan lost to eventual winners FC Barcelona 1–0 in the semi-finals, a match where Shevchenko controversially had a last minute equaliser denied by the referee.

Despite this, he still ended up being the top scorer of the whole competition with nine goals in 12 games.

On 8 February 2006, he became Milan’s second highest all-time goalscorer, behind Gunnar Nordahl, after netting against Treviso.He finished the season as joint fourth top scorer with 19 goals in 28 games.

Shevchenko ended his seven year stint with Milan with 175 goals in 296 games.

Sheva had been linked with a move away from the San Siro over the summer of 2005, however nothing materialised.

On 28 May 2006, Shevchenko left Milan for Chelsea for £30.8 million, topping Michael Essien’s transfer fee from the previous year and also breaking the record for a player signed by an English club. He received the number seven shirt, as the then Chelsea manager José Mourinho said that Shevchenko could continue wearing it. 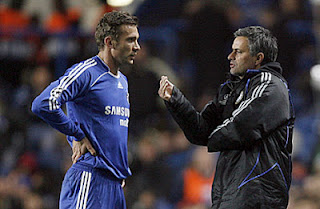 His time at Chelsea was not a particularly fruitful affair despite picking up League Cup and FA Cup winners medals.

However the goals he did score were often well worked individual efforts in and around the box, showing flashes of brilliance which on a consistent basis seemed to elude him.

He struggled to cement a regular first team place ahead of Ivorian striker Didier Drogba and after the departure of primarily Jose Mourinho who brought him to the club and then replacement Avram Grant shown the door, the new manager, Brazilian Luiz Felipe Scolari deemed him to be surplus to requirements.

AC Milan vice-president Adriano Galliani saw this an opportunity to bring back Shevchenko to the San Siro, the decision was then agreed that Milan would loan back Sheva for the 2008/09 season. 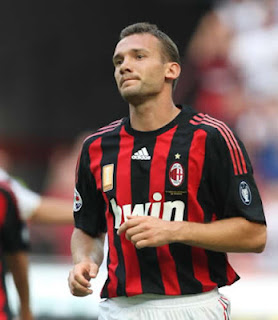 Sadly, the deal seemed a failure as Andriy struggled to replicate his performances of old in the red and black jersey of Milan. Scoring only twice in twenty six games, neither of which came in the league. A disappointing season both personally and collectively.

Subsequently, he was left out of national team squads, Sheva clearly reeling from his dip in form.

With many critics questioning his loss of powers and apparently dwindling abilities, he returned home, to his first love so to speak, to Kiev. 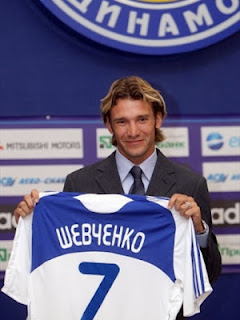 The crown jewel of Ukrainian football re-signs with the club he holds so dear, where his career began, perhaps at the age of 32 he had come full circle and with no regrets, concludes his footballing journey the way it should be.

Signing on with Dynamo Kiev for 2 years initially, his deal was extended for a further season.

Positionally in his second stint at kiev, he was employed as more of a link up man, in ernest of his clever footballing brain being more productively utilised than his legs which in the twilight of his career had begin to show signs of lacking that extra yard of pace to get beyond the last defender. 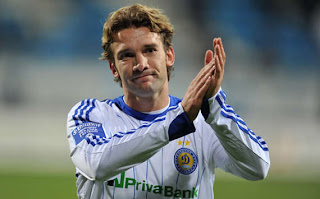 However he still chipped in with some telling goals, adding a further six to his professional European tally totalling 67, enough for third overall in the all-time continental list. He is also ranked 3rd in the all-time Champions League goal scoring charts with 58 goals.

Whilst at Kiev, Sheva got his hands on his final piece of silverware in an illustrious career, by winning the Ukrainian Super Cup in 2011.

His last act on the European footballing stage was at the European Championship’s held in his native Ukraine and Poland.

He started the opening game for the co-hosts against Sweden, calling on his old predatory powers as he struck twice in a man of the match performance to earn the Ukraine a come-from-behind win on a famous night in Kiev.

Sheva helped a relatively young Ukraine side with his unmatched experience, giving the home fans some final memorable moments as Ukraine recorded a maiden victory in their first European Championship’s game. 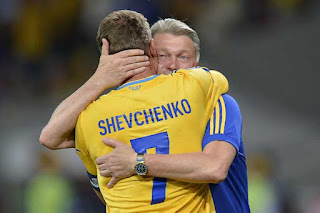 A fitting fairytale ending is written as Andriy Shevchenko’s final game’s as a player be in the yellow and blue of Ukraine, in Kiev, at a major tourament. 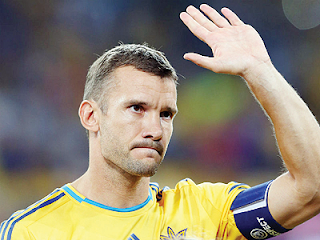 On announcing his retirement, the Ukrainian talisman explained: “I want to share the experience I have acquired in Europe and do something for my country.”

With more details to be released at a later date, Andriy hopes to embark on a career into politics in his home country.

In footballing terms, as one of the best strikers of a generation, he already has done so much for his country.

Chelsea: A Moment Of Worry For Di Matteo
Too Many Playmakers for Chelsea?