Lampard and Drogba may have made their final curtain call in Blues last weekend while elsewhere, three veterans decided to leave a club they have played 761 times in their combined 34 years of service.

Among the three, Gennaro Gattuso is the lowest profile one. The ever-fierce-looking midfielder always announces his presence on the field with his unfathomable tank of energy. With minimal interest in play-making, his intelligence weighs heavily towards breaking opponents’ play. Gattuso’s never-say-die attitude impacted AC Milan’s formation significantly for the next decade, allowing the soft Andrea Pirlo to shine in the anchorman role with protection from the persistent and marauding defensive midfielder.

When Carlo Anchelotti took full control in 2001, followed by the arrival of Filippo Inzaghi and Alessandro Nesta, the spine to AC Milan’s success had finally been formed.

Alessandro Nesta is probably the world’s best defender. He is strong, quick, composed, skilful, but also fragile. Nesta joined AC Milan in 2002 after a fruitful career at Lazio. His terrific partnership with Maldini had resolved the aging problem of AC Milan’s defence. In merely the first two seasons, he led Milan to bag five major trophies, including the long-missed Scudetto.

Filippo Inzaghi’s start in Milan was less straight-forward. His acquisition from Juventus was questionable, due to the similarity in style with Ukraine legend Andrei Shevchenko, but his goal-scoring record speaks for himself – 2nd all time goal scorer in European club competitions (Raul being the 1st); most hat-tricks in Serie A (10) and UEFA Champions League (3); all-time top scorer in AC Milan and first player to score in every international club competitions for European teams. On top of the records, “Pippo” had scored important goals for Milan en route to becoming champions, notably the brace that avenged Milan against Liverpool in the Champions League final rematch in 2007.

Their contributions went beyond club level; yet despite the 208 senior caps for Italy among the trio, only Gattuso was a major contributor to his country’s triumph in international competitions. The influence of the Gattuso-Pirlo partnership was extended profoundly to the national squad in 2006 and led Italy to their 4th World Cup title; Alessandro Nesta and Filippo Inzaghi could do no more than watching on the bench.

In spite of a horrific goal-scoring profile, even on the international level, Inzaghi often found himself at the bottom of the pack, falling behind Franscesco Totti, Alessandro Del Piero and Luca Toni in the starting lineup. Being prone to injuries was also a reason for his lack of recognition at the national level but injuries was a worse curse for his teammate Nesta, seeing all three of his World Cup trips ending in injuries.

No matter how good a player you are, the clock would not stop ticking for you. The inevitable emergence of young forces has reduced the involvement and importance of the trio; nevertheless, having not won a title since 2007, Nesta and Gattuso, at 35 and 33, fought against various injuries and still played major roles for AC Milan in their domestic League and Cup double in 2011. Inzaghi, who suffered from a season-ending injury, was determined to play on for another year at the age of 37. Nothing can keep their passion and professionalism for football away and this should be remembered and respected by the football community, particularly in a world today where players may be tempted by a better-paid contract over more playing time. 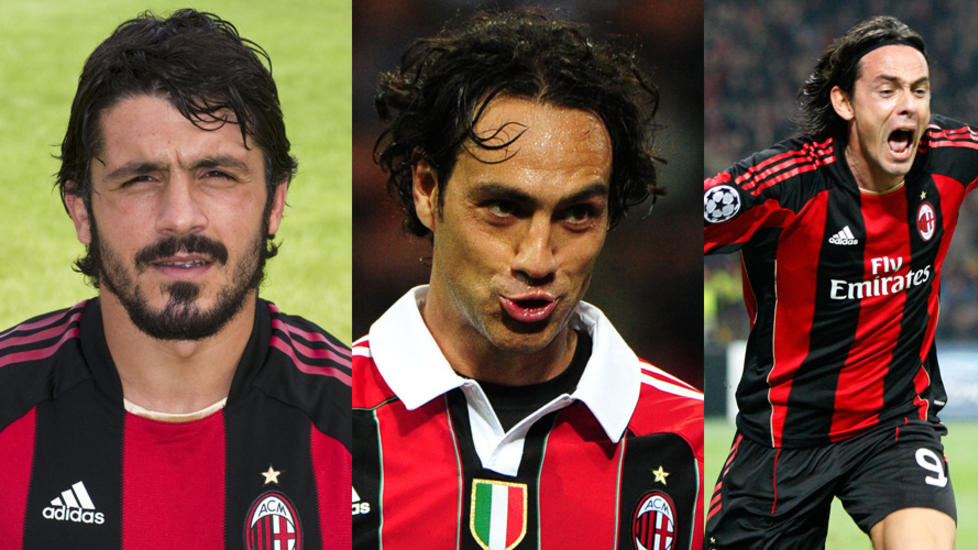 They aren’t just brilliant footballers with impressive CVs; they are as charismatic as they are successful. Gennaro Gattuso banked his shaving time for gym work and is perhaps the most influential player without the ball. Alessandro Nesta is the leading figure of modern defenders, always looking to start the wave of attack by playing out of the defence. “Pippo” is never known for his tricks to fool defenders, but more as a fox in the box, causing turbulence and nuisance by consistently challenging the offside trap. On what might be his last game in Italy, after yet another injury-plagued season, he reminded the world that he is, always, born to score goals.

These three living legends have not only left a mark in the history of football but as well as in the lives of Milan fans. We look up to them; we aspire to be like them. We are happy for them and we are sad with them. They will no longer be in their Milan shirts next season but it is evident that they love football too much to stop playing. Whether their future lies in Russia, Qatar or America, there is always a place for them not only in the Milan museum but also in our hearts.