An Introduction To The Italian National Football Team

Normally writing about Stoke City, as part of footballblog.co.uk’s Football Journalism Challenge, which is linked to at the bottom of this article, I’ve been allocated to write articles on the Italian national football team. The first article for the challenge is to be on Italy’s qualifying campaign for the 2010 World Cup in South Africa, but I thought it would be a good idea to give a brief introduction to the side and nation on which I shall be writing before I begin the challenge proper.

The official logo of the Italian national side

Football, or calcio, is the most popular sport in Italy, so it is little surprise that the country’s national side has a proud history of achievement. The Azzurri, as they are known, azzurri being Italian for blue, reflecting their iconic blue kit, are, of course, the current World Champions, having defeated France in a dramatic penalty shoot-out in the final of the 2006 World Cup in Germany. They have also won the biggest prize of all on three other occasions, in 1934, 1938 and 1982, with only the mighty Brazil having triumphed more times. Italy have also emerged victorious from a European Championships campaign once, in 1968, when they hosted the competition, and have also one a number of less prestigious honours, including the Olympic football tournament, and the now defunct Central European Cup. 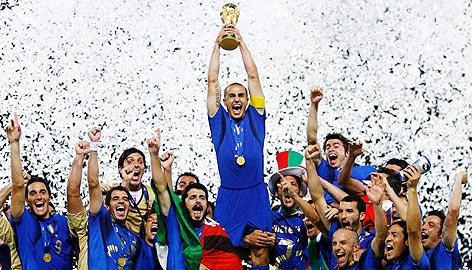 In recent years, the Italian side has been managed by a host of decorated coaches, including great names such as Dino Zoff and Cesare Maldini. The current head coach, Marcello Lippi, though, has every right to be in such fine company, and is seen as something of a national hero in Italy, the 61 year old former Sampdoria midfielder having managed the side to the last World Cup title. He did, in fact, step down from his duties as coach after the World Cup, claiming that the match-fixing scandal which was sweeping through Italian football at the time, and from which the game there has still not full recovered, played a large part in influencing his position. After turning down an offer to take the reins at Birmingham City in 2007, and denying interest in the vacant Mexico job, he was ultimately tempted back into coaching his country after the sacking of his underachieving predecessor Roberto Donadoni in 2008.

The shrewd Lippi, one of the greats of the Italian game

The Azzurri are equally well endowed when it comes to playing staff, their current squad including some of the world’s biggest names, such as Gianluigi Buffon, Fabio Cannavarro and Andrea Pirlo. The current captain of the side is the aforementioned Cannavarro, who is also the active player with the most caps for Italy, his 124 coming second only to the great Paolo Maldini, who has 126. The top international goalscorer from the current squad is the veteran Juventus forward Alessandro Del Piero, who has scored 27 times in his 91 caps. He still has some way to go to catch Luigi Riva, the country’s top goalscorer of all time, who netted 35 times in just 42 caps between 1965 and 1974, while playing for the Sardinian islanders Cagliari at the time, and leading them to the Scudetto, the Serie A title, in 1970.

The Italian national side does not have a fixed stadium in which to play its home matches. Instead, in a style that I only wish the English side did, it tours the country, playing in the biggest and best grounds, such as the Stadio Olympico in Rome, which will host this year’s champions League final,  and the Stadio Giuseppe Meazza, more commonly known as the San Siro, in Milan.

With the basics laid out, it should now become easier for me to write, and readers to enjoy this Italy blog and the future articles I write on it. Please note, my commitments to the Stoke City blog will continue as ever.

Details of the Football Journalism Challenge can be found here: http://www.footballjournalism.co.uk/forum/viewtopic.php?f=2&t=144