My first blog back and it’s virtually all depressing; so if you don’t like a down hearted blog then you best leave; but it’s something laying on mine and plenty of other Stokies thoughts.

Signing’s is the biggest pain in the neck of the lot so we could be a while. We have signed 1 player who will play a good part in this upcoming season; Dean Whitehead was a decent capture for us but we still need a lot more to progress from last season. I’m still all the way behind Pulis and I’m still sure we’ll get a few more in by 1st September but his methods of purchasing players is very annoying and risky; there are still several quality players in The Championship who are available at a decent price and we would have a good chance of capturing there signature and here is a list:

And there are players who are unlikely to be in the first XI in The Premiership so they would have some interest; but the main one is the Foreign Market there is always a risk whether or not they can adapt into the league but you must take gambles from time to time you could grab yourself another Morten Gamst Pedersen or Wilson Palacios but you could also end up with a Fabricio Coloccini or Ali Dia but life is made for taking risks!. We just never seem to be in for players if other teams we’re monitoring the same player and we seem to leave it like a scared rabbit; We must! put our foot down and show teams we can compete. I wouldn’t like do what Hull do by mentioning every player there in talks or made a bid for but I wouldn’t mind letting one slip out on odd occasion’s to let us know who we’re after and make us look like we’re busy because if we end up with no more signings I think there will be a lot of anger amongst the supporters and we could end up with a very long season. I think Hull’s most recent capture Jozy Altidore is a very good signing by Mr. Tango but would so suit us more with his sheer strength, athleticism, pace and power and ill admit I’m jealous of the signing if I’m totally honest and I don’t usually say that but I rate the American very highly.

Only Summer Recruit So Far

Steve Holland; thanks for dumping on us after only a few months into the job!; it is reported today that he is set to link up with Chelsea on Thursday to be Reserve Manager there. This is a huge job so it’s no surprise but on arriving here he said he wanted to make our academy great and our academy future looked very bright but with now him set to leave it leaves us once again looking for an Academy Manager. We have had 2 in the past 8 months and this is not good for our academy with having no sense of stability at the the top. We now already need to start hunting for one and at the moment I can’t think of anyone who would want the job other than Ronnie Sinclair who has been a loyal servant at Stoke and is a good coach but we need someone who has got a proven record as a good Academy Manager.

We have been after a Assistant Manager since Mid-June and it’s now early August and still no appointment this surely can’t be a good thing?. With mentions of Paul Jewell & former Potters coach Sam Ellis in the bag there has been clear showings that we have tried go for the right people but just no cigar as of yet but today there have been reports of intensive talks with Brian Kidd and this would be an exceptional capture for our club; Kidd recently turned down the chance to carry on with Portsmouth due to wanting to be closer to his Lancashire home; so Stoke is an ideal place for him to carry on working in the biggest league in the world. Also Gerry Francis is in talks with extending his stay in The Potteries for another season which is brilliant news; So there is some positive in this blog after all!. 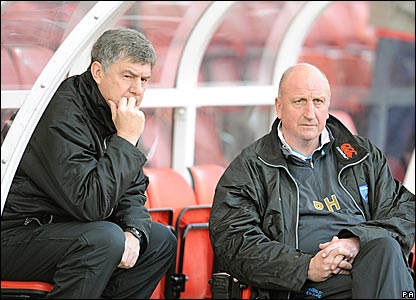 See you, Seyi
Doing The Rounds