The Premier League season for 2008/09 came to a close today, with Stoke suffering a heavy defeat at the hands of Arsenal in one of the days less significant matches. All the goals coming in the first half, the celebratory mood of the Stoke fans was hardly dented, as we struggled our way to the final whistle and a more that satisfactory mid-table finish, while the Gunners will have to be content with fourth place and no silverware once again.

Stoke manager Tony Pulis named a slightly surprising line-up for the match, with the powerful and committed Carl Dickinson, not having started a Premier League match for eight months, coming in at left-back, while Steve Simonsen played in goal for the Potters the official line being that regular number one Thomas Sorensen was suffering from a slight groin injury, but with it very possible that Simonsen will move on in the summer, it may be that Pulis just wanted to give the former Everton man, who has served Stoke so well for the last five years a good send off. It was proved academic anyway, as Simonsen sustained a hip injury after twenty minutes, Stoke already three goals down, and was replaced by Sorensen.

Carl Dickinson, one of the heroes of our promotion campaign, made a rare start

Senegalese holding midfielder Salif Diao also started, in place of winger Matthew Etherington, who had food poisoning, or is on the verge of a move to Fulham if you like that sort of story, meaning Rory Delap, whose long throw terrorised Arsenal’s defence in the return fixture, a 2-1 win for the Potters in November, played wide. Diao’s situation is in a way similar to Simonsen’s, as out of contract in the summer, it is unclear where his future lies, so this game could have been the swansong of his Stoke career.

Arsenal manager Arsene Wenger also made a change in the goalkeeping department, handing a debut to the young Italian Vito Mannone, because of injuries to both Manuel Almunia and Lukasz Fabianski. While there was no place for Emmanuel Adebayor in the querulous Frenchman’s eleven, it was still full of attacking talent, with the likes of Andrei Arshavin, Cesc Fabregas and Robin van Persie, who was hilariously sent off in the game at the Britannia Stadium all playing.

I’ll keep my reportage of the match fairly brief, as it was such an irrelevant one. Despite a bright start, Stoke fell behind after ten minutes, James Beattie, so used to finding the net at the other end, scored a comical own goal, deflected Fabregas’s low ball past Simonsen. It was an own goal not dissimilar to the one he scored in Stoke’s favour, while playing for Sheffield United at Bramhall Lane last year, the third in a comprehensive win for the Potters, and really set the tone of the on pitch proceedings for the Stoke fans, who really didn’t care, determined to enjoy the day regardless of the score. 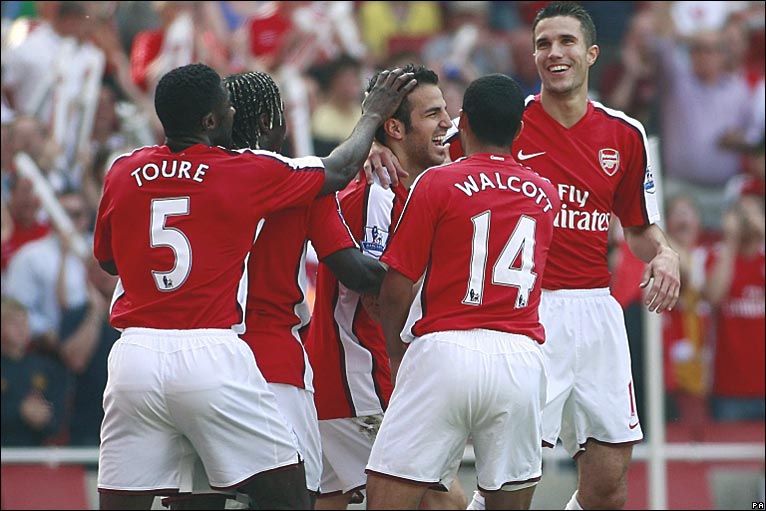 The lead was doubled six minutes later, as Ryan Shawcross, usually so reliable in defence for Stoke, brought down van Persie in the box. Going against Arsenal’s usual caveat of the player winning a penalty not taking it, the Dutch forward stepped up and calmly beat Simonsen, sending the ball well into the corner of the goal.

Two became three in the eighteenth minute, as Arsenal midfielder Abou Diaby rose highest to head home a good cross from van Persie, who seemed to be out for revenge against the club that had previously humiliated him. At this point, it was all getting too much for some Arsenal fans, with one even starting to sing. The man sitting next to him quickly told him to be quiet, as he was spoiling the match, and he was happy to oblige. 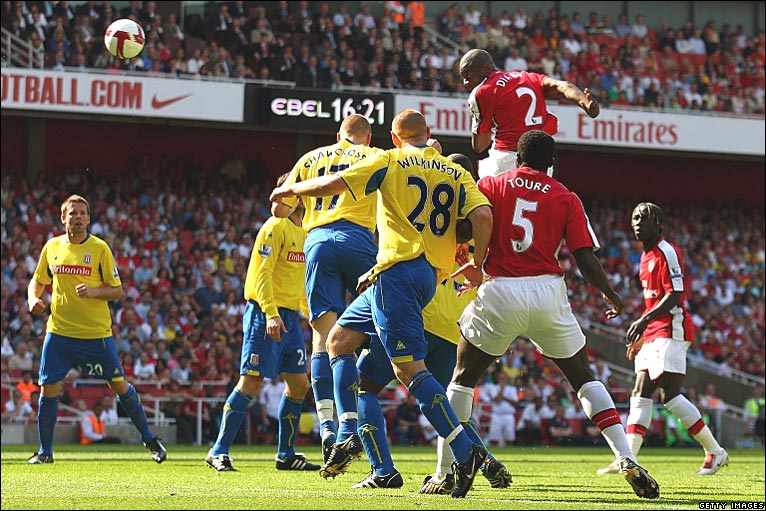 While it was beginning to look a little embarrassing for the Potters, we managed to squeeze a few dregs of respectability from the half on thirty minutes, Jamaican striker Ricardo Fuller being clumsily felled by Arsenal’s Denilson in the box, and, like van Persie before him, dusting himself off to score the resulting spot kick, coolly sending Mannone the wrong way. He finishes the season as the club’s top scorer with eleven goals, an excellent return for a forward playing in a side largely fighting against relegation. 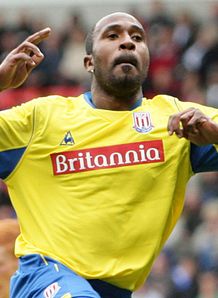 There was time for Arsenal to add one more however, before referee Martin Atkinson brought an end to the half, van Persie capitalising from an uncharacteristic mistake from Delap, who woefully headed the ball straight into his path, to fire past Sorensen, who had by this point come on, and restore the North Londoners’ three goal lead. That was the end of the scoring, though the Gunners bossed the second half, before Atkinson called time on the game and the season.

While we were outclassed on the day, little can blot the copybook of our excellent first season in the Premier League. Because Wigan beat Portsmouth to climb above us, our finishing position is twelfth, an excellent achievement considering we would all have been delighted with seventeenth place at the start of the season. Match of the Day, when they’ve finished having a good cry about Alan “Al” Shearer, will no doubt make a lot of the fact that Stoke were by far the inferior team today, but really, we don’t care at all. It wasn’t the ideal way to finish the season, but we’ll be back in August, hopefully buoyed by some quality signings, to play, fight, and hopefully succeed again, and that’s good enough for me.