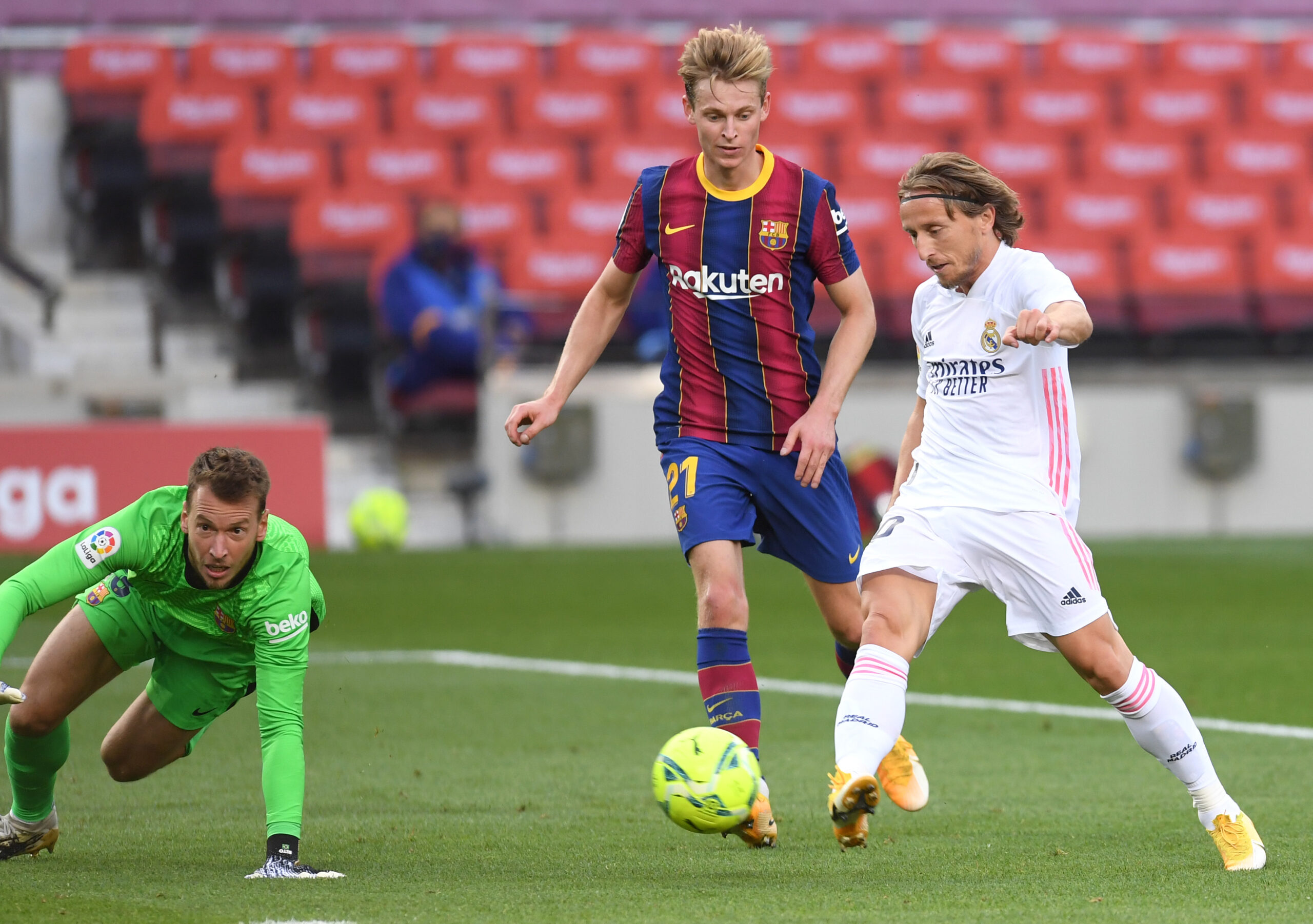 Camp Nou will come under the spotlight for one of football’s most highly anticipated events as Barcelona take on Real Madrid in a massive La Liga showdown on Sunday.

While Barca got off the mark in the Champions League with a narrow 1-0 home win over lowly Dynamo Kiev, Madrid dispatched another Ukrainian side Shakhtar Donetsk 5-0 on foreign soil.

The arch-rivals have experienced identical fortunes across their last four La Liga outings (W2, D1, L1), although the Catalans trail Carlo Ancelotti’s side by two points.

After an underwhelming start to the season, Barcelona continue to steady their ship, having won two competitive matches on the trot for the first time in 2021/22.

Los Merengues have won each of their last four La Liga encounters against Barca and could stretch that run to four in a row for the first time since 1965.

Following last season’s 3-1 victory at Camp Nou, the visitors could rack up back-to-back wins at this venue for the first time since 1965.

But a return of five wins from their 21 league visits to Camp Nou in the 21st century suggests Madrid’s triumph here is far from a foregone conclusion.

None of Barcelona’s last three La Liga fixtures have ended as a draw (W2, L1) following a brace of uneventful stalemates with Granada and Cadiz in mid-September.

While Barca’s overall performances will not encourage the home faithful, the hosts’ La Liga displays at Camp Nou should boost their ambitions of claiming all three points here.

Ronald Koeman’s men have won all but one of their five top-flight matches at home this season (D1), prevailing by a 2+ goal margin three times in the process.

Barcelona have found the net in 34 of their last 35 La Liga outings at Camp Nou, barring a goalless draw with Atletico Madrid in May 2021.

Under-fire Koeman faces the prospect of becoming only the second manager in La Liga history to lose his first three El Clasico showdowns, which would increase talks of him getting fired.

Ansu Fati scored Barcelona’s only goal in last season’s 3-1 H2H defeat at Camp Nou and could become only the fourth player to get on the scoresheet in his first two El Clasico starts in La Liga this century.

The 18-year-old prodigy has netted twice in his three La Liga appearances this term, including his stunning equaliser against Valencia last time out.

Although the aforementioned thrashing of Shakhtar halted Madrid’s three-game winless streak in all competitions, Los Merengues have failed to impress in La Liga of late.

Following a run of four top-flight victories by an aggregate score of 14-4, Ancelotti’s players have gone winless in their last two league outings (D1, L1), scoring just once in that sequence.

A dismal 2-1 away defeat to newly-promoted Espanyol in their most recent La Liga road trip puts Madrid in an awkward spot here, as they could lose back-to-back league matches on hostile turf for the first time since 2018/19.

Since each of Los Blancos’ last four league away games have featured a full-time margin of under 1.5 goals, we could be in for a tight, keenly-contested affair here.

A clear majority (88.89%) of Madrid’s La Liga goals scored/conceded on the road this season have come in the second half of play (16/18).

Karim Benzema has been nothing short of outstanding this season, as he tops the scoring charts in La Liga with nine goals and seven assists to his name.

The veteran forward is one of only 13 players to hit double digits in El Clasico history, having netted ten goals in 36 matches for Madrid against Barcelona.