Holloway’s appointment as Blackpool manager was greeted with great optimism by the Seagulls’ faithful. The fans began to see potential stability in a side that had suffered some turbulent times in terms of management. Only two months into the job and Ian Holloway had broken Blackpool’s previous transfer record with the signing of a Charlie Adam for £500,000; a player we all know has had almost as much success at Blackpool as Mr Holloway himself. Holloway inherited the club as a Championship side, the ambitions of which were perhaps to stay in the league for another season. In actual fact, what happened in Holloway’s first 366 days at the club was nothing short of a miracle!

After an outstanding season the club made it to Wembley to take on Cardiff City for a place in the Premier League. I recall seeing Holloway in the build up to the match and you got a strong sense that this was something he had been waiting for his entire career. Lets not forget that Blackpool, despite battling their way to Wembley were considered the underdogs in this match. What was strange however, was that I personally never felt Blackpool were destined to lose the match; rather the opposite. I’m sure that the Tangerine half of the 82,000 spectators on the day would have agreed. Despite falling behind twice, the decisive goal in a 3-2 victory came from none other than 33-year old Brett Ormerod; a striker who’s tireless work ethic over the years was rightly rewarded by Holloway in the biggest match of his life. Speaking of the victory, Holloway concluded “I can’t put this into words. I’m bursting with pride”. An estimated 100,000 fans lined the streets of Blackpool in celebration of the clubs promotion, where Holloway admitted that the journey he had been on with Blackpool so far was the best of his life. 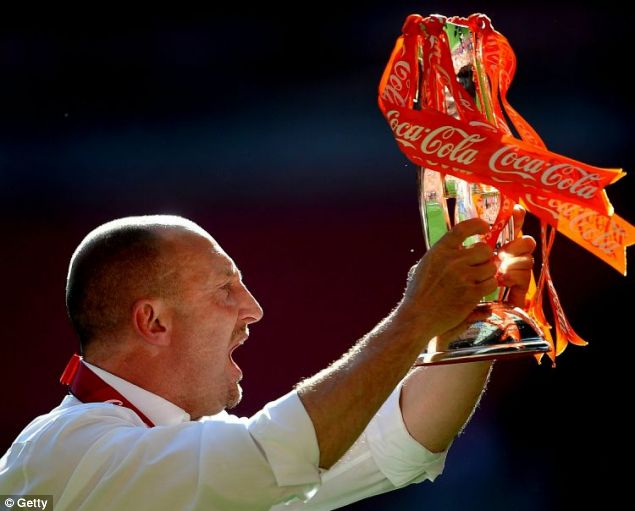 Holloway’s personality and refreshingly honest approach to the game is perhaps what makes him the notorious figure he is. I can honestly say that their can’t be a single person in the game who would begrudge him the success he has worked so hard to earn. So why is Ian Holloway so different to the vast majority of Managers in the Premier League? In a nutshell, he is an honest drop in an ocean of Premier League ego’s. Managers such as Arsene Wenger, Sir Alex Ferguson and Sam Allardyce (to name a few) have all been reprimanded in the past for making comments deemed inappropriate to The FA. Holloway’s philosophy and belief in football means he is not afraid to speak his mind, but he communicates his thoughts in a unique way; using common sense!

Lets take his views on the potential use of technology in football at the top level. Holloway suggested “What is the sense in pundits saying, ‘let’s put a white line across this pitch and oh look, he’s onside there, and he (the referee) is wrong’. We can show the fourth official that and he will say it is a perfectly good goal”. Whilst some would say that the proposed introduction of technology may remove talking points from the game, what Holloway says is completely correct.

Similarly, Holloway deems the current Bosman Ruling as “ludicrous”, citing the control a player and his agent have over a Football Club as completely unacceptable. We all know that the comments were in reference to the Wayne Rooney transfer saga and I for one wholeheartedly agree with him.

Holloway has always been very committed to his family and has cited the birth of his children as the happiest moments of his life. Three of his children were born deaf; something he says has touched and enhanced the families lives. I remember seeing an interview a few years back when Holloway revealed he commuted over 200 miles a day from Bristol (Family Home) to QPR and back for 3 years; enabling the children to attend a specialist deaf school.

Here we are 3 months into Blackpool’s debut Premier League season and the side lie 14th in what is a very tight and difficult table. Three wins away from home this season match the records of Chelsea, Arsenal and Manchester City; a statistic that demonstrates the belief Holloway has developed in his side. A few hiccups at home have slightly hampered the side, but lets not for a second let that cloud the job that has been done.

So what does the future hold for Blackpool and Holloway? I firmly believe that with Holloway at the helm Blackpool will stay in the Premier League; and who would want it any other way? For me, weekly viewings of Match of the Day are made so much better by Holloway’s quirky and honest interviews we all know and love. So why don’t we finish with a quote relating to the 10 changes Holloway made in the sides’ 3-2 away loss to Aston Villa last night. “If some bright spark from the Premier League wants to tell me who I can pick then come and have a cup of coffee and you’ll probably get it chucked in your lap”. Here Here!!