Not even the spur of the home crowd could help promotion hopefuls Sheffield United as they were comprehensively beaten 0v4 by Birmingham City in the FA Cup fourth round. 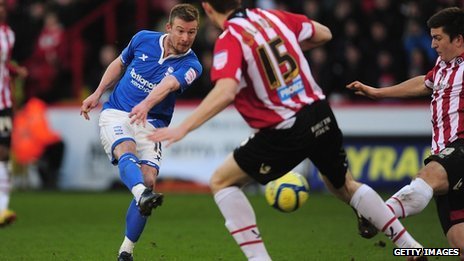 Striker Adam Rooney reiterated before the game that Blues’ FA Cup challenge is serious, despite the demanding number of fixtures to play already this season: “We want to win every game we play in. We showed our desire against Wolves and we wanted to get through to the next round – Sheffield will be no different.” Chris Hughton had decided to shuffle the pack slightly, opting for Colin Doyle in goal and allowing Rooney to lead the line up top. This game was lined up to be an interesting prospect, with League One high-flyers Sheffield United employing the home crowd advantage, whilst Birmingham were carrying a great deal of momentum from a recent run of good form.

Despite United’s bright start, and Blues’ early lack of opportunities, Birmingham took the lead inside 20 minutes when 17 year-old starlet Nathan Redmond fired in from the edge of the area following a Jordan Mutch corner, knocking the stuffing out of the home side. Despite the potential of Sheffield United, since the first goal Blues generally looked in control. They started knocking the ball about some more, and just before half time winger Chris Burke produced a cross, which was converted by Adam Rooney. There were no substitutions at half time for either side, and no real change in the run of play as Blues picked up from where they left off. A deflected Wade Elliot shot from 20 yards  made it 0v3, whilst shortly after Rooney added his second to complete a comprehensive victory.

This wasn’t a game expected to be a walkover, and therefore the scoreline came as something of a surprise. Despite this, the result, which maintains Birmingham’s clean sheet count and unbeaten streak, will only add to the momentum and confidence brewing at St. Andrews. Manager Hughton commented after the game:

“It was a real good all-round performance. I’m as delighted with the clean-sheet and the performance as I am with the goals.

“They were certainly a threat but then we got into our rhythm and the timing of our goals was important.

“We’re enjoying playing football and that breeds a certain amount of confidence.”

In terms of a challenge, Blues couldn’t have asked for a tougher prospect in the 5th round, having been drawn against Chelsea at Stamford Bridge. For now though, Birmingham will be concentrating on their next Championship match against Leeds at Elland Road, where they will be vying to maintain their promotion chase.

Important winger Beausejour set to depart for the promised land.
Sheffield United – Is This Monty’s Last Season as a Blade?