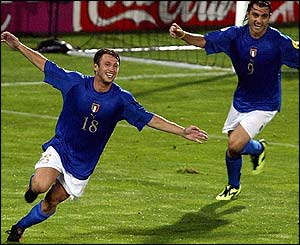 Cassano given thumbs up while Inzaghi is not

Donadoni has announced his 24-man squad for the Uefa Euro 08 Championships and the “surprise” of the choice was that of Antonio Cassano instead of Filippo Inzaghi. The Sampdoria striker’s fine performance against Juventus on the last day of the season could have lifted the weight from Inzaghi and that could have well casted Inzaghi away from Austria and Switzerland. With Inzaghi’s advancing years, this could have been touted as Inzaghi’s last international tournament with Italy considering the advances in Italy’s youngsters.

No surprise in the goalkeeper choice as Buffon, Amelia and De Sanctis were chosen. Montolivo can have his first major international tournament as well as Di Natale. After scoring two goals during the weekend and thus getting the Serie A Top scorer award in the process, Alex Del Piero was also included in the squad. Regarding Del Piero, Donadoni said that he had faced some physical problems and fitness yet he managed to overcome them and turn this season into a spectacle, and that is why he is in.