Quite an Interesting blog today with possible sad news and so hope the deal I’m talking about is not true because I will be devastated if he goes. I’ll start off with incoming transfer news.

Robert Huth – According to the papers Stoke have made a bid for the Middlesbrough and German International defender with one claiming the deal will be done before Wednesday’s trip to Anfield. Believed to be in the region of £2.5m it would be a great coup and with him turning 25 tomorrow there is still plenty of years in the ‘Berlin Wall’. He started his career at Chelsea and made his debut at 17 but didn’t play much because of John Terry, William Gallas and Blues legend Marcel Desailly. With Jose Mourinho’s arrival it was going to be even hard for the German to get his chance with 3 world class defenders in his way (Terry, Gallas and Carvalho) and he wanted a move from Stamford Bridge and on the Transfer deadline in 2006 he signed for Middlesbrough for £6m on a 5-year deal. His first season for the Teesiders was not successful due to injury problems but when getting his chance coming back in the team after the sale of England defender Jonathan Woodgate he hasn’t looked back since and formed a successful partnership between him and England U21 player David Wheater. Since relegation to The Championship Gareth Southgate has been saying that if the right offer came in for the German he would let him go and it looks like a deal has been agreed. He would be great back up to Abdoulaye Faye and Ryan Shawcross as Ibrahima Sonko & Leon Cort don’t look good enough for the league so for £2.5m it would be a cracking bargain.

Likely Arrival And A Good One At That!

James Collins – Reports are suggestion Stoke have agreed a £5m deal with West Ham for the Welsh International. The ex-Cardiff player was snapped up by West Ham in 2005 with team mate and fellow countryman Danny Gabbidon in a £3.5m deal. But during his stay in London he has had several injuries including one that ruled him out for 9 months!; so you could class him as injury-proned. Despite his injuries he is a good defender and a colossal in the air and is well liked by The Hammers fans but for the fee been touted they think it’s a good deal for there club; I however think £5m is a couple of millions to much and also if we we’re to sign Huth and Collins that would mean there is an pending deal to sell a player which I’ll talk about later on the article.

Demba Ba – A paper suggested that Stoke we’re considering bidding for the French born Senegalese international. With his club Hoffenheim putting a £15m price tag on his head to ward away clubs for him it’s believed Stoke are willing to pay the whole lot for him!. Standing at 6’3″ he is a big presence in the air and his goalscoring record is extremely good with him scoring 53 times in 95 games thats less than a goal every 2 games! and with Stoke having plenty of fellow International team mates it maybe one of the those unexpected signings bit like Hull’s likely arrival of Alvaro Negredo for £12m. 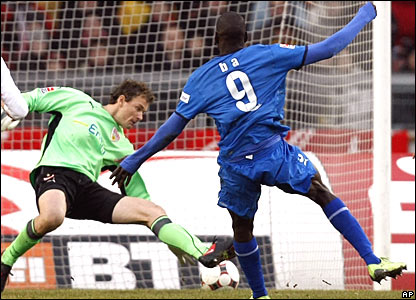 Ryan Shawcross – This is the sad part of the blog; it’s believed Liverpool, Manchester United, Everton are battling it out for our young star. Reports are suggesting that Man United have the upper hand against there Merseyside rivals as they have a breech of contract with Stoke and have first option on the young man this deal would be devastating news to all Stoke fans if it we’re to happen. With reports suggesting £5m would be enough well I felt sick and thought actually disgusted that we would be brought for such a low sum with Hull demanding £12m for Michael Turner then I want at least £15m with add ons and percentage of next sale and even if they do offer it we still don’t need to sell. We have seen him grow up so he is like our young boy growing up into a man and like most mothers do we don’t want him go. He has been absolutely brilliant for Stoke and like every Stoke fan I don’t want him to leave; but Tony Pulis, Peter Coates and even Ryan have said they have heard nothing from the 3 clubs so is it all tabloid rubbish? I desperately hope so. PLEASE STAY RYAN!