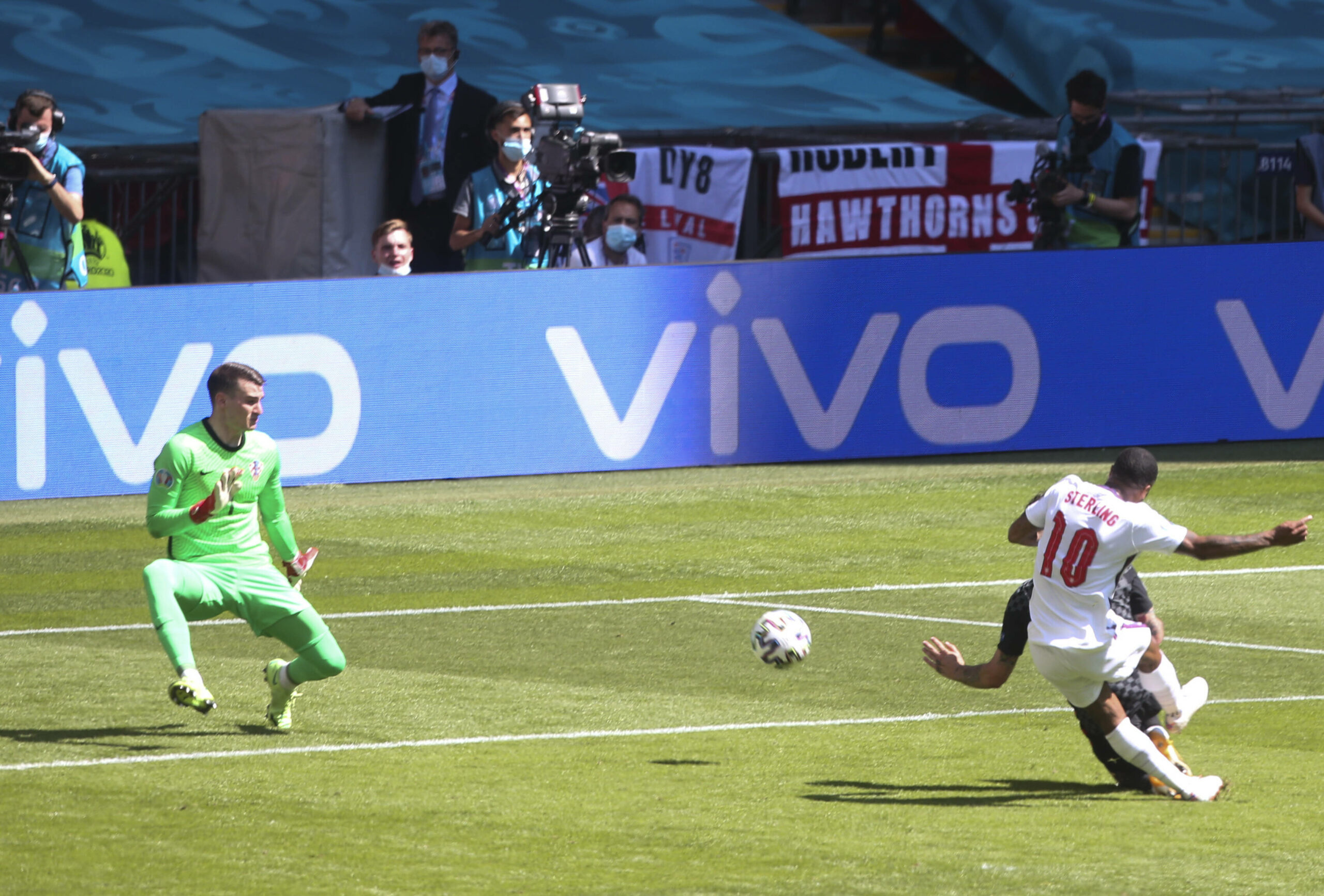 England defeated Croatia 1-0 in their first game of the delayed 2020 European Championships on Sunday.

Gareth Southgate’s team dominated throughout and started on the front foot with some quick thinking from Kieran Trippier to throw the ball to Sterling in space and allow the forward to drive at goal.

He slipped in Phil Foden who cut in on his left foot and saw a strike come back off the post.

Kalvin Phillips then had a powerful volley at goal from a corner palmed away by Croatian goalkeeper Dominik Livakovic before Sterling volleyed over directly from another Trippier throw-in.

The home side were on top but weren’t taking their chances. They were given a rare warning shortly before the half-hour mark as Inter Milan man Ivan Perisic fired over in the area.

That seemed to startle England, and they produced another chance before the break.

Sterling earned a free-kick close to goal by forcing defender Duje Caleta-Car into a handball, but Trippier was unable to recreate his World Cup heroics against the Croats and fired into the wall.

As the second half started, there was a minor moment of nervousness for Southgate’s side as Tyrone Mings’ clearance bounced off Perisic and travelled towards goal.

Goalkeeper Jordan Pickford reacted well and caught the ball as it dipped under his crossbar.

Pickford had to react again shortly after to prevent Croatia when Trippier’s header back wasn’t weighted correctly. The goalkeeper beat his opponent to the ball and cleared away.

For the third time in ten minutes, Everton’s number one had to keep out the opposition, this time a bit more straightforward to gather Luka Modric’s driven shot.

Having been on the back foot for a short period, England produced some quality and grabbed what turned out to be the only goal of the game.

Kalvin Phillips – who was impressive throughout – drifted into some space close to the box and fended off a challenge to thread the ball through to Sterling’s feet.

Sterling made no mistake and fired home, sending the 22,500 fans inside Wembley wild.

Just three minutes later, Harry Kane should have pit England two up from close range. Mason Mount crossed the ball and the Spurs forward connected but fired over the bar before colliding heavily with the post.

Kane recovered but should have been punished for his miss by Ante Rebic when the ball fell to the Croatian in space in the England box, but he dragged his shot wide.

Both sides had half-chances thereafter, bit neither could find the back of the net.

Southgate used substitutions to his advantage to rotate the squad, perhaps with an eye on their next game against Scotland.

Amongst the substitutes, 17-year-old Jude Bellingham became the youngest ever player to make an appearance for England at the European Championships.

England held onto their lead and broke an unwanted record by winning their opening game at the Euros for the first time in 10 attempts.

The Three Lions are back in action against Scotland on Friday.