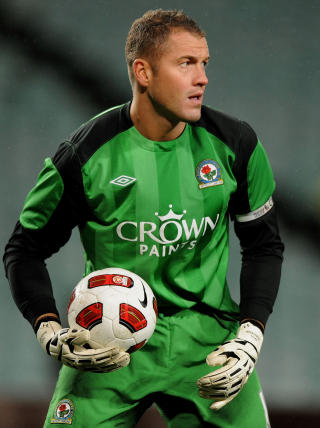 ﻿ With his best years seemingly behind him the Blackburn stopper has turned back the clock reproducing the form that saw him earn the England no1 jersey, which he held for the best part of a decade. Robinson has made vital saves throughout the season which looked to have secured Rovers place in the top flight,  proving himself as a top keeper once more.

Prior to the season Banies had always been tagged as ‘one for the future’ or a ‘hot prospect,’ However this season The Everton man has matured into the player we all knew he could be. Comfortable in defence and attack with a cultured left foot, Baines has been an ever present rock for the Toffees, and look certain to be Ashley Cole’s successor for England. David Moyes will be hoping to hold on the full back as he the ‘top five’ will all be chasing his signature.

The former Chelsea man has looked solid all year at the hart of Stokes defence. A towering presence in both boxes and a tough tackling ‘no nonsense’ defender, the German complements Stokes robust style perfectly. The Britannia is never an easy place to go, Huth has played his part and more, in making Stoke away one of the leagues most difficult fixtures.

Signed from championship side Cardiff City, Johnson has very much premier league class since his transition to the top flight. Part of Birmingham’s solid defence which has been the rock on which there survival campaign has been built, Johnson has also captained the blues to Carling cup victory over Arsenal, giving the club some much desired silverware. Johnson’s commitment on the field has inspired those around him, summed up when he played through the pain barrier against Arsenal holding out against Van Persie and co until a defensive calamity saw the blues lift the cup.

An all action full back who has galloped forward time and time again in attack for the magpies, while looking assured in defence. Signed on a five year deal in 2007 the Spaniard has cemented his place in ‘toon’s’ defence this year making the step from the championship to Premiership with ease. Next year Enrique’s searching passes and powerful runs will surely be a feature in Newcastle look to build on their success this year.

Comfortable with either foot and on either flank, Jarvis has been a joy to watch for Wolves this season and has been involved in some many of the positive attacking play the club has produced. His ability to cross with left and right makes it very difficult for defenders to work angles and cancel him out, tricky and with an eye for a pass, expect to see the wide-man in the Premier league next year, even if Wolves aren’t there with him.

An automatic choice in this years team, leading the hammers from start to finish ever minuet of every game, his midfield energy and desire has been incredible, and if West Ham do avoid relegation Parker can feel almost personally responsible. The intensity in his performances has galvanised those around him, and time and time again the hammers have turned to their inspirational captain when the chips were down. Voted Writers player of the year, the England man has also shown that those in smaller clubs can still challenge for individual honours.

After a glittering start in the championship with the sea-siders few expected Adam to continue his maverick form into the Premier league. However his wonderfully dead ball deliveries, precisionpassing and free kick curlers have lit up the EPL. Consequently the Scotsman has attracted the attention of European chasers Spurs and Liverpool, Spurs almost getting their man in January. Ian Holloway knows he has an ace up his sleeve when Adam is on the field and will be looking to Charlie to guide the Tangerines through the tension of their relegation battle.

Nzogbia has been one of  few players this year for Wigan who have done themselves justice on the field. The powerful midfielder has an impressive seven assists to his name this season, and has been at the heart of latics attack from start to finish. If Wigan are to avoid the drop Nzogbia will once again have to lead from the front and drag his team to safety.

The slight front-man has been a revelation since his move from Russia, finding himself above the likes of Torres and Rooney in the goal scoring charts. The baggies look safe from relegation due to Nigerians goal scoring exploits and the little forward has already smashed the clubs goal scoring tally for a season in the top flight, with 14 to his name. West Brom have bagged themselves a bargain in Odemwingie, and the forward is already a hero among fans at the Hawthorns.

Cited as the new ﻿Solskjaer, the baby faced Mexican has the looks and the talent to live up to his new tag. ‘Chicharito’ has delighted united fans with his goal poaching expertise, many of his goals coming late on in important matches. Signed from Chivas in the MLS many doubted the strikers talent and questioned weather he could adjust to to the quick pace, physical English game. However 12 league goals later those in the red half of Manchester are more than happy with their teams world cup signing, and Hernandez looks set to go on and lift the Premier league trophy at the first time of asking.