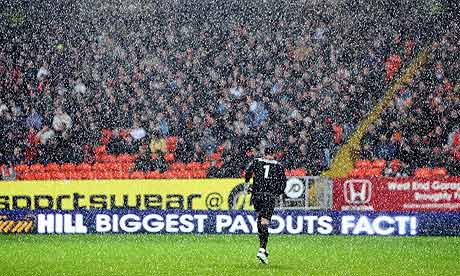 Fierce rain put hault to an impressive first-half between Dundee United and Rangers which saw the Champions lead 1-0 thanks to a Steven Davis goal. Referee Mike Tumilty made the decision along with his linesman at half-time to abandon the game after heavy rain in the Dundee Area since last night. Whether it was the right decision or not, I’m sure both managers will be disappointed for different reasons. Rangers started the game, handing a league debut to Danny Wilson – who In my opinion, had a fantastic first-half. A huge positive for the club.

United started strong and hit the bar after a few minutes when Kovacevic’s glancing header was out of reach of McGregor and it tipped the frame of the goal. Rangers took the lead when a corner was cleared to Sasa Papac, who made a long, high pass across the box, Davis made an intelligent run from wide and caught the United defence napping to slot home the goal. Paul Dixon hit the crossbar from a free-kick, Prince Bauben had a few decent chances and Steven Whittaker brought out a fine save from Nicky Weaver but at the end of the day, United and Rangers will lock horns another time.