Rangers are through to the Semi-Finals of the Co-operative Insurance Cup after a 3-1 win over First Division side Dundee at Dens Park. Goals from Steven Whittaker, John Fleck & a Gary McKenzie own goal gave us the victory in the 90 minutes, but as per usual, it was far from a one-sided game. Rangers will be joined by St Mirren in the semi-finals, who they beat in the Scottish Cup Semi-Finals last year, and they will also be joined by St Johnstone. Tomorrow, we will find out who will be the final be club to qualify for the final 4 between Celtic and Hearts in the televised fixture.

Back to our game, Steven Whittaker gave Rangers the lead after 15 minutes with a header from a John Fleck cross. Leigh Griffiths gave Dundee the equaliser after 28 minutes when he fired home a long-range free-kick into the top corner, compared to Davie Cooper’s famous strike against Aberdeen in the 80s. A mix-up between Gary McKenzie and Tony Bullock gave Rangers their 2nd goal when McKenzie nodded the ball into his own net. Rangers sat back and absorbed pressure from Dundee, but our strength was on the counter-attack and John Fleck broke away to make it 3-1. 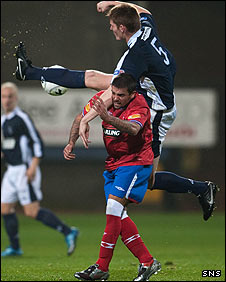 After all the negatives surrounding the finances of the club, a few very small glimmer of hopes with young centre-back Danny Wilson making his senior debut, I am hoping he can go from strength to strength and nail down a starting jersey possibly next season. Jordan McMillan made his debut at RB, and John Fleck got a starting role in centre-midfield, his natrual position, he is usually played left-midfield, but it was good to have him playing there.

Time of Change For Rangers?
Tannadice Waits For Stumbling Gers