The Gills winning streak comes to a halt

After notching up a 5th straight league win against Stevenage on New years day, the Gillingham squad would have been full of confidence ahead of Saturday’s game against Wycombe at the infamous Adams Park which Gills fans need no reminder why the stadium holds depressing memories after losing 3-0 there at the end of last season, which saw the Gills return to the foot of the football league.

And the chance to gain revenge over Wycombe was missed On Saturday as they completed the double over Gillingham for the season with a less than comprehensive 1-0 victory. A moment of lapse in concentration led to the only goal of the game as Dave Whitfield tucked away a well placed header from a Corner. The Gills would go on to rue a costly error and the after Cody Macdonald’s effort beat everyone but the cross-bar, the Chairboys secured a valuable 3 points and were responsible for putting an abrupt halt to a great run of win’s from the Gills.

Hessenthaler later spoke of the fatigue that has affected the squad after a hectic Christmas period.

“I thought we looked a little bit tired today. They’ve had the same amount of games as us as well but especially first half we didn’t really get going. But I can’t fault the boys’ effort – I think we’ve had to really dig deep to turn things around and maybe it’s one game too many for us.” 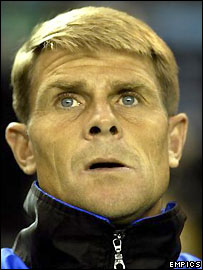 Despite suffering a loss, us Gills fans can be very proud of the recent performances from the Gills which has led to a remarkable recovery that sees the team occupy 9th position, just outside the play-off positions. Before playing Wycombe, the Gills were the form team of the division and this is great testament to the Manager and players who have showed great spirit to turn around a season that originally looked a depressing sight. Hopefully with a bit of rest and some hard work on the training pitch the Gills can rediscover their winning ways away at managerless Stockport and move further up the table.