Jermaine Jenas, Jonathan Woodgate and David Bentley all came off the bench to play in the second half of England’s friendly clash with the Czech Republic. All 3 made a good impression, with David Bentley swinging in a late corner to provide Joe Cole with a 90th minute equaliser. Cole’s goal made the game level, finishing England-2 Czech Republic-2. 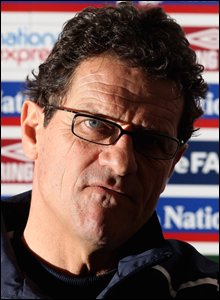 New England boss Fabio Capello recieved a lot of criticism this morning, following the rather lacklustre England performance. The world cup qualifier’s are rapidly approaching and many will hope to see an improved performance. Only two Tottenham players lost their international matches last night-and both played for the same side. Welsh U21 stars Gareth Bale and Chris Gunter were on the losing team as the Welsh youngsters went down 1-0 to the Romanian U21 team. Fortunately for Tottenham, no players reported back injured.