A sweet Kenny Miller hat-trick in the second-half to seal the three points at Easter Road.

Miller hit the net on 64, 70 and 93 minutes to add to his tally which started well with the opener against Kilmarnock last weekend. Last season’s player of the year Steven Davis made his return from a virus which kept him out of the Killie game and he replaced Kirk Broadfoot with Steven Whittaker moving back to his natural right-back position. The new East Stand was unvelied this afternoon and was near enough fill to capacity as the attendance just exceeded 17,000.

Both teams were very sloppy in possession first-half with the SPL Champions frustrating on the eye as they struggled to get going. It was a game starved of any clear-cut chances but Hibs could have opened the scoring when Michael Hart reacted quicker than Lafferty to head the ball across the goal but McGregor was on hand to punch the ball away from the waiting Anthony Stokes. The main flashpoint in the game came just before half-time when Kyle Lafferty made a rash tackle on Liam Miller which resulted in handbags between Kevin McBride, Anthony Stokes and Lafferty. Brines grappled with Lafferty to remove him from the proceedings and the referee decided, harshly in my view, to send off both Lafferty and McBride. 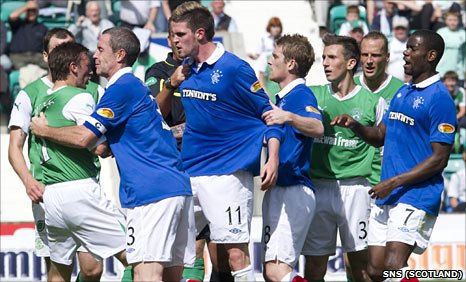 With both sides down to ten men, the game began to open up especially in the middle of the park with Hibs reverting to just two central midfielders which allowed Edu and Davis to stamp their authority on the game. Steven Naismith created Rangers’ first main chance of the game when he made a darting run down the right and supplied Miller with a decent cross which the striker headed over the top. Rangers were soon given a kick up the backside when Hibs went forward and Galbraith tipped the ball past the hesitant McGregor to De Graaf on the goal-line but Bougherra produced a stunning intervention to keep the score at 0-0. Soon after, Rangers took the lead when Sasa Papac decided to go for the long-range effort which deflected off Edu producing a decent save from Mark Brown, but the ball fell to Beattie who kept cool to slide the ball back to Miller and he fired high into the empty net.

Vladimir Weiss came on to make his Rangers debut and made a telling impact on the game with his quick feet and direct play. Weiss picked the ball up on the left-side and made a neat one-two with Davis before cutting the ball back for Miller who had an easy job of scoring his second of the game. Miller scored his hat-trick, and fourth goal of the season, on 93 minutes when he went through on goal thanks to Davis’ pass and he fired a fine left-foot shot past Brown and into the corner.

Jelavic is a Ger!
Gers Await Fate In CL Draw!