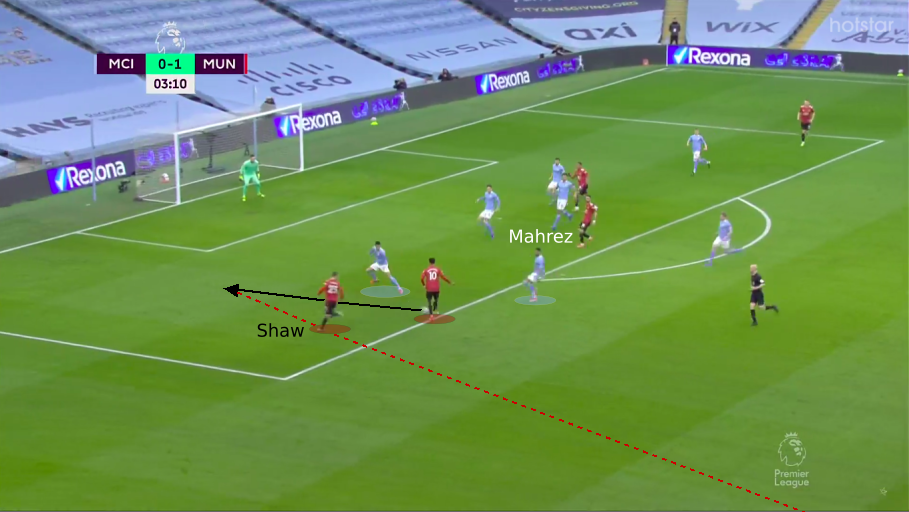 Nearly three months after one of the most underwhelming 0-0s in the Premier League’s Manchester derby history, City faced United at the Etihad Stadium. The hosts turned their season around after that draw, going on a 28-match unbeaten streak in all competitions and flying miles clear at the top of the Premier League table. United, meanwhile, were holding their own in second place in an otherwise-stuttering league, but they were far from perfect and simply could not live with their neighbours’ consistency.

The Premier League trophy was perhaps already wrapped in Sky Blue ribbons, but the small matter of bragging rights and City’s 21-match winning run in all competitions was at stake, so the match was no less exciting.

After a scintillating start involving the third-quickest goal in this fixture’s Premier League history, Manchester United held on and added a second early on in the second half to secure a historic victory which stopped their local rivals from racking up a club-record 28 unbeaten matches.

Pep Guardiola is often accused of overthinking big games, but this was not the case in this match. The Spaniard stayed true to his trusted system and picked a very strong (and in form) side too, yet things did not go his way. This was in part due to some well-overdue poor performances from many key Manchester City players, but United must also be given credit for making the most of it.

The Red Devils got a huge boost just 30 seconds into the match, as they won the ball high up the pitch after pressing Gabriel Jesus well. Anthony Martial then drove into the box, and in a bid to make amends for his error, Jesus ended up bringing the French striker down. Bruno Fernandes converted from the spot to give his side an early lead.

After shaking City early on, Manchester United crucially did not allow them to settle down by systematically pressing high up the pitch.

The Red Devils pressed using their front-four in a 3-1. Anthony Martial led it by going after the ball, while Daniel James looked to mark Oleksandr Zinchenko, Bruno Fernandes prevented Rodri from having any freedom and Marcus Rashford followed João Cancelo in his inverted full-back role. The wingers were prepared to press the corresponding centre-back if there was an opportunity.

Rashford went up to press John Stones far more often than James pressed Rúben Dias. This is because he did not have a pure full-back to deal with, as Cancelo’s position in midfield could be countered by Fred.

After applying a successful high press early on to further destabilise their opponents, Manchester United defended deep in a 4-2-3-1, with Scott McTominay and Fred marking İlkay Gündoğan and Kevin De Bruyne respectively.

Riyad Mahrez often dropped deep into the space vacated by Cancelo, but Luke Shaw followed him all the way and prevented him from having too much time on the ball. In doing so, though, he left a lot of space in behind which the likes of De Bruyne and Cancelo could exploit.

Puzzlingly, though, City did not try to attack down the right too often, with just 29% of their moves coming from this flank. In the rare event that they did so with Cancelo or De Bruyne accessing the space in the wide area, Fred would double up at left-back and neutralise the threat.

Although they just had 34.1% of possession, United used it quite effectively, even beating their opponents on xG. Here is how they worked with the ball:

The Red Devils built up in a 3-4 with the full-backs moving alongside the holding midfielders and using Dean Henderson. Thus gave them a three-man advantage against Manchester City’s four-man press, rendering it ineffective in the away third.

Manchester United’s main attacking route was down the left flank, as is proven by the fact that 45% of their attacks came from there.

Rashford had a decent amount of joy against Cancelo, but more importantly, Mahrez could not live with Shaw’s overlapping runs, so United often doubled up against the Manchester City full-back.

This was helped by United’s 3-4 in the build up, which meant that the full-backs started beyond the Manchester City wingers. Shaw used this advantage brilliantly for his goal, as he received Henderson’s throw in a nice amount of space on the wing, getting to run at Cancelo in a 2v1 alongside Rashford.

After breezing past Cancelo, Shaw played a quick one-two with Rashford to get around Stones and finally drilled his shot past Ederson.

Even Guardiola had to yield to Manchester United’s utter dominance on their left when he replaced Cancelo with Kyle Walker in the 65th minute. With this change, the Spanish tactician took away the Red Devils’ threat in transition as Walker would not get caught in midfield like Cancelo did in his inverted role, and he could also make overlapping runs like a conventional full-back. This was, therefore, a very positive change, which nearly returned a reward when Walker’s cross travelled towards Raheem Sterling at the edge of the six-yard box, but it was not his – or Manchester City’s – day.

This day was bound to come, though; winning 21 games consecutively while effectively playing once every three days can never be sustainable. That run in itself was incredible, but there still is a long way to go this season, which is why this derby defeat might prove to be an important slap on the wrist for City to not get complacent. No matter how important a local squabble may be, there is no question that Manchester City would rather lose to their neighbours in an all-but-sealed league than throw away yet another Champions League quarter-final.

From a Manchester United perspective, it is safe to say that Ole Gunnar Solskjær got his away derby tactics spot on once again. This performance was a polar opposite to the borefest we were subject to against Crystal Palace, and there is good reason for that. The Red Devils are incredibly potent in transition when their opponents afford vast expanses of space, which is how they won this match, but they struggle against low blocks which demand some more innovation to be broken down. Their style of play means that they will almost always struggle against ‘lesser’ sides who opt for pragmatism over bravery, and this is perhaps what has derailed their title challenge.

With all of that said, though, it is imperative that we take nothing away from the brilliance that Manchester United displayed against their local rivals. They were lively from the first whistle, pressing smartly and proactively, defending resolutely, and most importantly, transitioning to attack swiftly and successfully. As aforementioned, Solskjær’s gameplan was flawless, and his players executed it to a tee. Luke Shaw was particularly exceptional in both attack and defence in a performance that epitomised his redemption this season, and he got his just rewards with his second career league goal.