Portsmouth have confirmed that they have signed French defender Younes Kaboul from Tottenham, ending months of speculation that the player would join Sunderland or Aston Villa.

The 22 year old is believed to have cost Portsmouth a fee in theÂ reigon of Â£6m, however both clubs have refused to disclose the actual ammount.

Kaboul joined Tottenham last yearÂ from French side Auxerre for a fee of Â£8m but only made 19 premier league starts and failed to strike up a rapport with the Tottenham faithful. 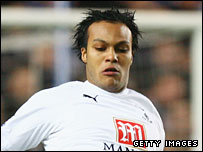 The Frenchman was said to be “relieved” to exit Tottenham and later told the Portsmouth website; ” I only ever wanted to come here. Everyone in the papers said I was going to go to Sunderland or Aston Villa but there was never any doubt in my mind that I wanted to come here.”

“”I came here because the manager has wanted me for two years. I met him when I was at Auxerre and I like the man because he gives you confidence.”

Kaboul will now compete for the centre-back spot at Pompy with Sylvain Distin and former Tottenham, and Arsenal, player Sol Campbell.

Kaboul’s departure now leaves Woodgate, Dawson, Dervite and captain Ledley King to fight it out for the centre back position at White Hart Lane.