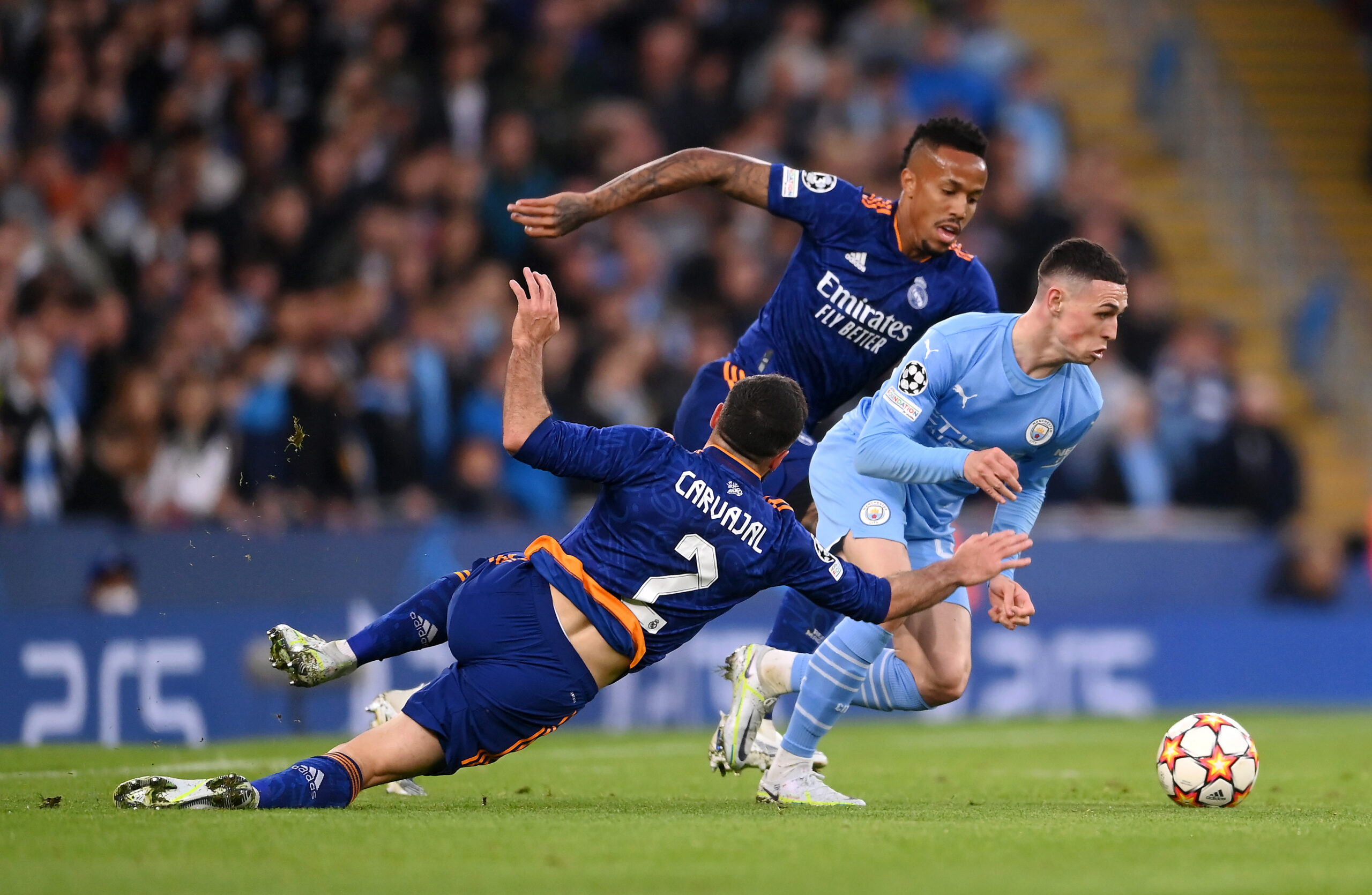 Let’s take a look at what happened in the three best European competitions and what we could expect in the return legs.

Two of Europe’s supreme powers collided at the Etihad Stadium on Tuesday as Manchester City squeezed past Real Madrid 4-3 in the first leg of their blockbuster semi-final tie.

Kevin De Bruyne, Gabriel Jesus, Raheem Sterling and Bernardo Silva were on the scoresheet for Pep Guardiola’s rampaging side in their most eye-catching European showing this term.

However, numerous squandered goalscoring opportunities could backfire on the reigning Premier League champions in the Spanish capital.

Vinicius Junior and Karim Benzema’s double left Madrid in the tie, handing Carlo Ancelotti’s team an outside chance to stage another comeback and qualify for a record-extending 16th Champions League final.

Los Merengues picked themselves up from a first-leg defeat to crash Paris Saint-Germain out of the round of 16 and will be looking to emulate that performance against one of the most in-form sides in Europe.

With Man City firing on all cylinders and Benzema enjoying his best spell at the Santiago Bernabeu, the second leg should offer more fireworks, especially with Madrid forced to hunt down a one-goal deficit.

Despite walking away with a slender one-goal lead, the Cityzens were a far better team at the Etihad, and we back them to seal their place in back-to-back Champions League showpiece events for the first time.

Not many European clubs are superior to Jurgen Klopp’s high-flying Liverpool, as evidenced by yet another routine Champions League victory over Villarreal.

The Spaniards held the Reds at bay in the first half at Anfield despite conceding 15 shots on goal in the opening 45 minutes, but the hosts’ unrelenting pressure paid off after the restart.

Pervis Estupinian first scored an unfortunate own goal to get Liverpool off the mark eight minutes into this second half before Sadio Mane slotted home a delightful through ball from Mohamed Salah.

Another sublime display from the Premier League heavyweights saw Villarreal restricted to one attempt in 90 minutes, laying the foundation for Liverpool’s tenth appearance in the Champions League final.

Forced to chase down a two-goal deficit, the Yellow Submarine will have to drop their defensive-minded philosophy in the return leg, which would open plenty of space for the Reds at La Ceramica.

It was not the best of RB Leipzig’s performances by any stretch of the imagination, yet Domenico Tedesco’s side eked out a 1-0 home win over Rangers in midweek.

Scoring opportunities were at a premium in the first leg of this exciting Europa League semi-final tie as Die Roten Bullen left it late to beat a spirited Gers side.

Angelino’s late screamer gave the Red Bull Arena a reason for celebration, breaking down Giovanni van Bronckhorst’s rock-solid backline to handing his team a slender lead ahead of the second leg at Ibrox.

Rangers put on a decent defensive display in Germany, but the absence of standout striker Alfredo Morelos blunted their attacking edge at the Red Bull Arena.

Having maintained their impressive record of scoring in every continental fixture this season, Leipzig will feel confident about reaching their first-ever final of a major European competition.

An intimidating atmosphere at Ibrox could give Rangers the upper hand in the return leg, but the Bundesliga giants are in pole position to get to Ramon Sanchez Pizjuan.

Eintracht Frankfurt stunned the London Stadium on Thursday, as Ansgar Knauff and Daichi Kamada inspired the Germans to a 2-1 win over West Ham United in the first leg of their Europa League semi-final tie.

David Moyes’ men are still alive in this last-four contest, courtesy of Michail Anotnio’s first-half strike, but they will have a mountain to climb at the Deutsche Bank Park.

Brimming with confidence after maintaining their unbeaten run in this season’s Europa League campaign, Die Adler will be looking to finish the job in front of attending home fans.

A stellar night in London showed aggregate triumphs over Real Betis and Barcelona were no fluke, with a first appearance in a European grand final since 1980 now a real possibility for Frankfurt.

West Ham’s recent dip in form has not only cast doubt on their hopes of achieving a top-six Premier League finish, but it also threatens to render their impressive European campaign meaningless.

The Hammers were left to rue Jarrod Bowen’s late crossbar, which could potentially sway this tie into the Germans’ favour.

Yet, Frankfurt’s dismal 11-game home form (W1, D4, L5) gives the English team a reason to hope and we back the Irons to come from behind and reach the final.

Dessers scored either side of half-time to become the outright top-scorer in the competition with ten goals, but Bamba Dieng and Gerson made sure to keep Les Olympiens in this tie.

The first-half football at De Kuip offered arguably the most exciting end-to-end action in this season’s Conference League, with Marseille cancelling out a two-goal deficit in just 12 minutes.

Both sides had numerous clear-cut chances to change the scoreline in the second half, making this the most enjoyable European fixture to watch in midweek.

We expect Marseille to thrive at the Velodrome in the rematch and qualify for their second European final in five years.

Leicester City and Roma shared the spoils in a 1-1 draw at the King Power Stadium, leaving both sides with all to play for at the Stadio Olimpico in the return leg.

Jose Mourinho’s men took an early lead through captain Lorenzo Pellegrini, but Gianluca Mancini’s own goal midway through the second half restored parity in his evenly-poised semi-final tie.

Leicester dominated possession and created more scoring opportunities in the East Midlands without the final product and will need to improve in Rome to get this tie over the line.

Once again Mourinho’s side dropped back after taking the deal and were punished for a cowardly approach.

We expect Brendan Rodgers’ side to edge Roma out and advance to the grand final in Albania.