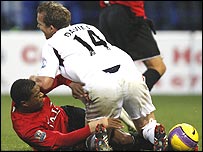 In todayâ€™s (Wednesday) game against Bolton, the duel between Kevin Davies and Patrice Evra is likely to continue and intensify. For some reason or another, the Bolton striker has a particular dislike towards the Man Utd left-back. This has been noticed by Patrice Evra himself in the teamsâ€™ encounters in recent seasons. Last season, when Davies was tackling Evra very hard, the Frenchman asked him why he tackles him like that:

“It was the same last year. When Davies kicked me, I said to him ‘Why do you tackle like that?’ And he said ‘It’s because I don’t like you!’ â€“ Patrice Evra

Evra recounts that the Bolton vs Man Utd game of the 24th November 2007 was the game in which he suffered the highest number of bad tackles in his career. One of these, in particular, deserved a red card and Sir Alex Ferguson was incensed that referee Mark Clattenburg did not send Davies off. Protestations led to Ferguson being sent off to the stands by the referee.

Rather than calling for a more cautious approach by Kevin Davies in this match, Bolton boss Gary Megson is hoping for a repeat of the November game, in which the ultimate outcome was a win for Bolton. It remains to be seen if we will see the red card in this game. The match will be refereed by Alan Wiley. Wiley has issued just one red card in the 23 matches he has refereed this season, meaning that he may employ a lenient approach in tonightâ€™s match.