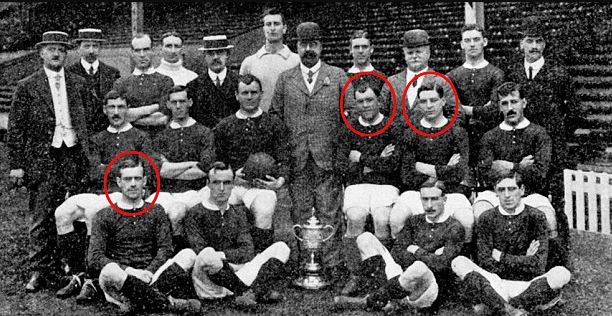 Match-fixing in football is something that is not talked about enough but the abhorrent practice has marred the beautiful game on many occasions.

From Asian football to the highest tiers of Europe, fixing matches date back to more than a century.

Although the governing bodies of football, including FIFA and UEFA, have put in place several anti-match fixing contingency plans over the years, the act still gets carried out from time to time.

One such incident rattled English football in the 20th century and not just because of the severity of the crime but also because it involved two of the biggest English clubs in Manchester United and Liverpool.

In 1915, three United players and four from Liverpool were handed lifetime bans by the Football Association (FA) for their involvement in a scandalous match-fixing incident.

The match was fixed in United’s favour with many players from either side benefiting from the financial windfall from the beets placed on the result.

Although the sentences were carried out in 1915, the match in question took place in the previous season.

The widespread devastation caused by World War I is said to be one of the chief motivators for the crime. Since footballers in England were fully professional by then, the impending risk of loss of livelihood caused by the suspension of football activities loomed large.

In the 1914-15 season, United hosted their rivals at Old Trafford on Good Friday for a First Division fixture. The team from Manchester, under the stewardship of Jack Robson, were fighting for survival in the league while Liverpool sat comfortably in mid table.

More than 18,000 fans graced the stands at Old Trafford as the two teams prepared to take on each other.

But something did not look right. George Anderson put United ahead early in the game but the Liverpool players barely showed any signs of concern.

A few minutes later, United won a penalty. Centre back and captain Patrick O’Connell stepped up to double his side’s lead but the shot was so far wide, it nearly hit the corner flag, according to some match reports.

“From all reports, he walked back up the pitch laughing as he thought ‘well it doesn’t matter, we can get another goal whenever we want one’,” says sports writer Graham Sharpe.

Anderson made amends later in the first half by scoring United’s second goal and the two teams went into the break with the home side leading 2-0.

According to some reports, a massive row ensued between the conspirators of both teams and the players who were not involved in the fix during the half-time break.

Another significantly suspicious incident that marred the game was when Liverpool’s Fred Pagnam hit the crossbar. As soon as Pagnam’s ferocious shot rattled the woodwork, he was reportedly rebuked by some of his teammates for trying to pull a goal back for Liverpool.

The team from Merseyside also failed to convert a penalty that was awarded to them, further adding to the long list of suspicions.

“A number of his teammates gestured angrily towards him. It’s almost as if there were two matches going on at once,” added Sharpe.

The match ended in a 2-0 victory to United. However, an official inquiry by the authorities was ordered shortly afterwards.

Later that year, Sandy Turnbull, Enoch West and Arthur Whalley of United and Tom Fairfoul, Tom Miller, Bob Purcell and Jackie Sheldon of Liverpool were handed lifetime bans for their role in the match. Sheldon, a former United player, was later alleged to be the ring leader of the whole scam.

As the First World War required the service of all able-bodied men in Britain, the players went off to the battlefields to lend their hands to the war effort. Many of the players involved in the scheme were relieved of their lifetime bans in recognition of their service to Great Britain.

Turnbull received his official pardon posthumously as he was fatally wounded in the Battle of Arras in France.

The Football Association concluded in its findings that the whole scandal was concocted by the players themselves and that no official from either club was guilty of any wrongdoing. This resulted in neither United nor Liverpool facing any sanctions from the authorities.

The First World War forced the Football League to not resume until the 1919–20 season.

Enoch West, although did not plead guilty, decided to sue the Football Association for libel. Since there were concrete evidence of his role in the match fixing scandal, he lost the case.

His lifetime ban was lifted 30 years later meaning that he could once again take to the football pitch. But unfortunately for West, he was 59 and too old to help any team win matches.

There is a general belief that the main motivation for the players involved in the match fixing scandal was financial rewards and not to save United from possible relegation.

Regardless, the two points that United won from the win helped them secure 18th position on the table and hence avoid a drop to the Second Division.

Chelsea, who finished 19th just one point behind United, were automatically relegated.

Before the start of the 1919-20 season, the Football League decided to expand the First Division by two additional teams. Chelsea along with their London rivals Arsenal were elected back to the top division, sparing them the deep drop.