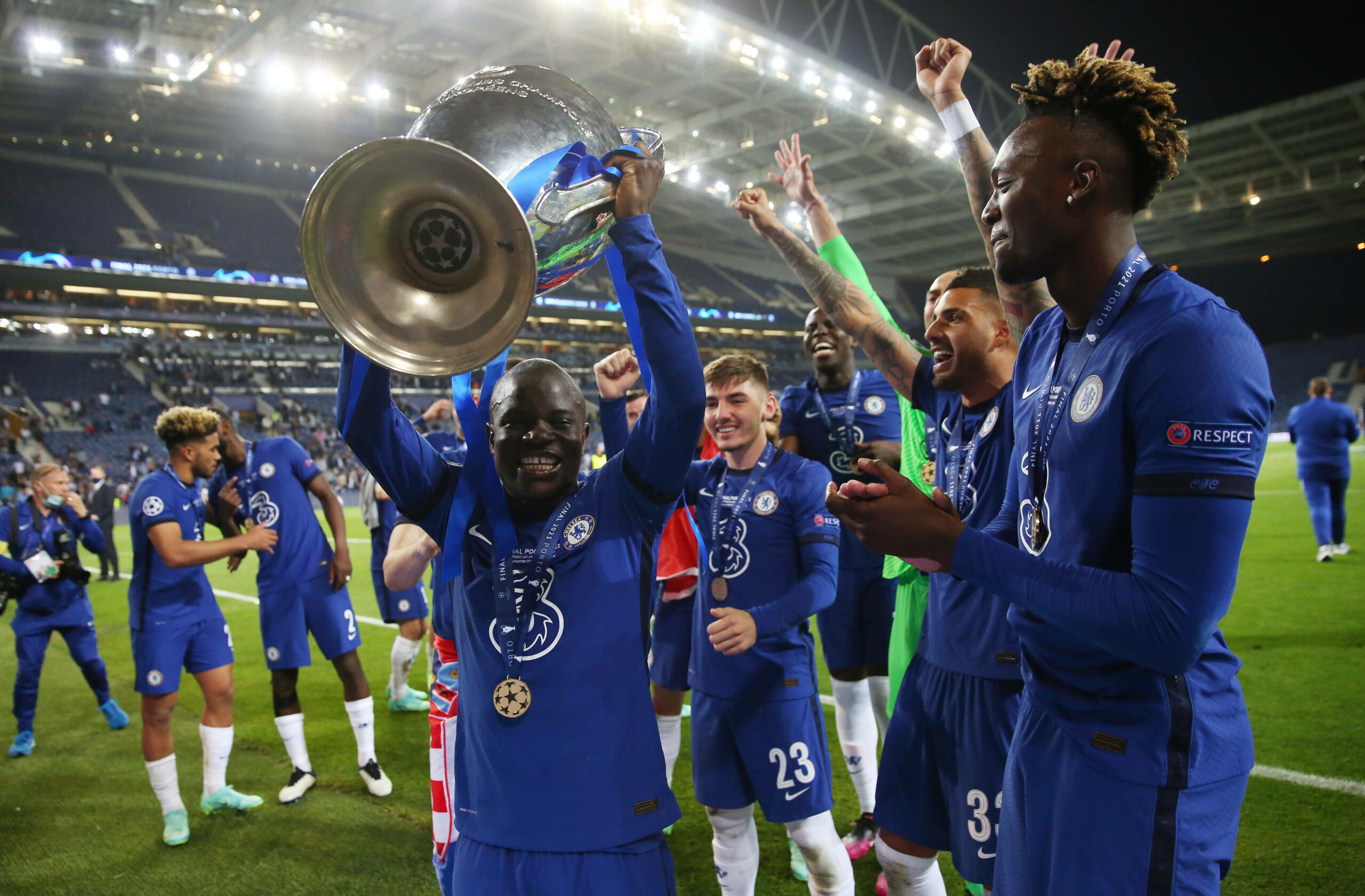 The top flight season is finally over, and all major trophies have been dished out. It’s transfer window season now, with a sprinkling of international football still to come.

It was a week for the underdogs. The heavily fancied Manchester City were defeated by Chelsea, Manchester Utd lost on penalties to Villarreal, and Brentford reached the top flight for the first time in over 70 years.

In this week’s Monday Briefing, we’ll be looking back at some of the biggest talking points from the last seven days.

N’Golo Kante – the favourite for the Ballon d’Or?

Back on May 12, some idiot wrote an article about the top ten contenders for the Ballon d’Or and left N’Golo Kante out completely.

Heck, he even had Antoine Griezmann as an honourable mention. This man genuinely thought Griezmann had a better shot at the Ballon d’Or than N’Golo Kante. Should be sacked immediately.

Self-deprecating jokes aside, Kante has shot right up the rankings in the last few weeks with several standout performances.

He earned the Man of the Match award in both legs of the semi-final against Real Madrid and added another to his personal collection in the final.

The little Frenchman is now getting several shouts for the Ballon d’Or award, and a strong showing at the European Championship will almost certainly put the prize into his hands.

Is this deserved? Probably not. One month ago, he wouldn’t have even been in contention for the award. Mason Mount won Chelsea’s Player of the Year and has been far more consistent over the campaign.

However, the Ballon d’Or often favours the big occasions – especially the Champions League. Kante performed in the most important games, and that’s what is currently swinging the balance in his favour.

Pep Guardiola has not won the Champions League without the likes of Lionel Messi, Xavi and Andres Iniesta. As we all know, this makes him an utterly useless, shameful manager. Time to retire and take up punditry for BeIN SPORTS, Josep.

Saturday’s final was a huge opportunity to change this, as well as a chance for Man City to get their first piece of European silverware on the board.

Up against a Chelsea side who had just about finished inside the top four, the Cityzens were hotly fancied to win the tie.

But this wasn’t how it panned out. Kai Havertz scored the only goal of the game, giving Thomas Tuchel’s side the victory and the trophy.

A lot of the pre and post-match discussion was around Guardiola’s team selection, having opted not to field a defensive midfielder.

Fernandinho and Rodri both sat on the bench, while a midfield of Ilkay Gundogan, Bernardo Silva and Kevin De Bruyne lined up from the first whistle.

It would be wrong to sit here and write about what Guardiola should have done. He’s one of the most decorated managers of all time, and the whole Griezmann, Kante, Ballon d’Or is still fresh in the mind. Whatever inspired his team selection, he must have had his reasons.

Rodri featured in both domestic games against Tuchel’s Chelsea this season, while Fernandinho started in the FA Cup semi-final.

Both fixtures ended with the Londoners on top. It’s not as simple as ‘if he’d picked a DM, City would have won’, and it’s far too easy to say this in hindsight.

However, a big question mark still remains over Guardiola’s record in the Champions League with Man City. Over the last five years, they’ve been brilliant domestically, winning eight trophies and breaking countless records.

But they’ve repeatedly let themselves down on the European stage, and this was the case again on Saturday.

Just have a look at the opposition that they’ve been knocked out by since Guardiola’s arrival. Monaco, Liverpool (before they hit their peak), Tottenham Hotspur, Lyon and now Chelsea – they were the favourites in every single one of these ties.

Sometimes they’ve been on the wrong end of some bad luck. No amount of planning can prepare you for Fernando Llorente bundling one in off his hip, or Raheem Sterling having a late winner ruled out because Sergio Aguero was half a step offside in the build up. You’re going to get unlucky every now and then.

But five years of upsets in a row? That’s a bit more than just bad luck. Whether the problem is tactical or mental, it’s something that needs fixing.

Is De Gea’s time at Manchester United over?

There was once a time when David de Gea was widely considered to be the best goalkeeper in the world. It feels like so long ago now, but the Spaniard was carrying Man Utd, producing world class stops week in week out.

But the 30-year-old has suffered a huge fall from grace, and it was epitomised by the Europa League final penalty shootout defeat to Villarreal.

De Gea faced 11 penalties and failed to save a single one, before stepping up to miss the crucial spot kick that handed the trophy to the La Liga side.

The former Atletico Madrid man has let in his last 40 penalties in a row, in a run that stretches back over five years. The xG for a penalty is about 0.77, meaning that just under a quarter of penalties are missed.

Basically, De Gea has let in about ten more penalties than he should have in that run. While penalty saving isn’t easy, you’d expect far more from any professional goalkeeper, let alone one who is supposed to be one of the world’s best.

One man who does have a good record from penalties is Dean Henderson, who sat and watched from the bench as his teammates failed to get their hands on some silverware.

Ole Gunnar Solskjaer had one remaining substitution – he could have brought on Henderson if he wished. But he decided to stay loyal to De Gea, and it backfired.

It’s been a disappointing few years for De Gea, who clearly isn’t what he used to be. With the much younger Henderson coming through, perhaps it’s time for the Red Devils to cash in while they still can.

The last time Brentford played in the top tier of English football, the Second World War had just ended and Roy Hodgson hadn’t been born yet. They’ve had so many near misses along the way, most recently losing to local rivals Fulham in last season’s play-off final.

But that all changed on Saturday, when a confident Bees side comfortably swept aside Swansea City in the play-off final at Wembley.

Ivan Toney bagged his 33rd of the season from the penalty spot, and Emiliano Marcondes made it two. There were no other goals, but Jay Fulton saw red in the second half.

It should be interesting to see how they fare in the Premier League. They likely won’t have the spending power of the rest of the league.

However, what they do have is one of the best recruitment teams in the country, who have been able to consistently find diamonds in the rough.

Also, a big congratulations to Blackpool, who also achieved promotion via the play-offs yesterday, beating Lincoln City 2-1 thanks to Kenny Dougall’s double.

With the club season over, there is little to look forward to. Morecambe play Newport County in the League Two play-off final this afternoon, but aside from that, it’s all internationals.

The European Championships are fast approaching, with every side playing their warm up games this week. Spain face Portugal on Friday in the most tempting fixture of the schedule, and Belgium and Croatia clash on Sunday, with both sides looking to make progress on their impressive 2018 World Cup showings.

Or, if friendlies aren’t your thing, there are World Cup qualifiers in South America. Argentina vs Chile is the most exciting fixture of this lot, in a repeat of the 2015 and 2016 Copa America finals. They oppose each other during the early hours of Friday, June 4.

Aside from that, there is very little else. However, it’s a small wait before Euro 2020 and the Copa America, which kick off in under two weeks.

Champions League Final: A tale of three managers
Morning Mix: Missing out on Buendia is no loss for Arsenal, big summer ahead for Leeds United