Much had been made of the Portsmouth v Sunderland fixture, yet the football was secondary in terms of what the fans were looking forward to.

A protest, previously planned for the postponed Birmingham fixture, took place in Frogmore Road an hour before kick-off, with more than 800 fans attending at one point.

Banners, placards, boards, you name it, Pompey fans were there in voice in front of a wide collection of newspaper, radio and television journalists.

They sent the message that needed to be sent: We are Pompey, we need to survive.

Fans handed a petition to CEO Peter Storrie, whom was met with a chorus of boos upon meeting the fans, forcing a wry smile.

Striker John Utaka was the hero of the afternoon as he scored a well-deserved brace to keep Portsmouth’s FA Cup dream alive.

Sunderland were first to take the lead through a smart finish by England hopeful Darren Bent, knocking the stuffing out of a Portsmouth side who had started brightly.

The Mackems had the opportunity to nick a last minute equaliser, if it wasn’t for a fine save from Bosnian Asmir Begovic.

Sunderland arrived at Fratton Park without an away win in 10 matches, suffering a 7-2 defeat to Chelsea in their last away fixture. They were guilty of sloppy defending then and they guilty of just the same on Saturday.

Nevertheless, when Jordan Henderson flicked on a Bolo Zenden throw, Bent had the simple task of tucking the ball past Begovic for his 15th goal of the season. It was deja vu for any Pompey fan in attendance.

A Portsmouth equaliser looked unlikely, as the home side struggled to create any attacking opportunities to threaten the Sunderland defence. Midfielder Kevin Prince-Boateng appealed for a penalty after being charged down by defender Paulo Da Silva. However, referee Peter Walton waved the claim away.

Pompey received a much needed stroke of luck though, with ‘keeper Craig Gordon being guilty of awful positioning, a player who will eventually cost Sunderland £9m.

The Scottish international was caught too far off his line as John Utaka connected with a well-aimed diagonal cross from Marc Wilson to head into an empty net. It was a goal that justified his selection, after previously impressing in the last FA Cup tie against Coventry.

What’s the phrase? You wait a long time for one bus and then two come at once? Maybe that’s an appropriate idiom to describe John Utaka and goalscoring.

A powerful header by Younes Kaboul in the second-half set up Utaka for a one-on-one situation with Gordon, which allowed him the simple task of clipping the ball past Gordon into the back of the net.

Pompey were brimming with confidence and went close to extending their lead through a powerful drive from Boateng, which was well-saved by Gordon.

Sunderland responded quickly and went close with a firmly-struck shot by Darren Bent. Sunderland were then convinced they had equalised, after Boateng managed to clear a Da Silva header off the line.

However, Portsmouth deserved their win and managed to hang on to the final whistle, putting on a good show for the loyal 10,000 fans that turned out to watch. 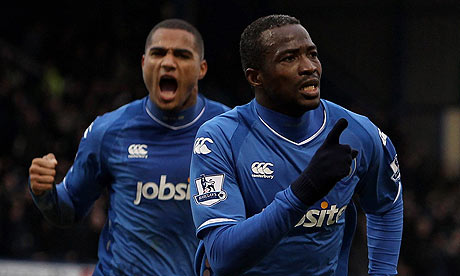