A second half goal from Raul Meireles was enough to book Portugal’s place at the 2010 World Cup against a surprisingly lacklustre Bosnia and Herzegovina side.

Following a solid 1-0 victory at home against their lesser known opponents, the Portuguese knew that a goal in Bosnia would ensure that the hosts would have to score three times to stand any chance of winning the two legged tie. 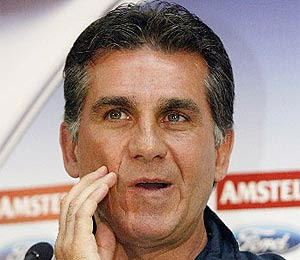 The opening period began with Portugal looking the more likely to stretch their aggregate lead even further ahead. However, a lack of composure in the final third kept Bosnia in with a chance of nicking a goal. Even so, the hosts who had their best ever chance of making a World Cup finals were relatively inactive with Miralem Pjanic and Edin Dzeko failing to live up to their dangerous reputation.

Carlos Queiroz’s side had their first real chance in the 20th minute as Tiago backheeled for Raul Merieles who unfortunately struck his low shot straight at the goalkeeper.

However, the game started to become scrappy for the remainder of the half with neither side looking really likely to open the scoring.

The second half saw Portugal approach the match in a more positive manner and the team effectively put the tie to bed in the 55th minute as a low cross from Nani found the impressive Merieles unmarked in the penalty area. The midfielder slotted past the goalkeeper to make it 2-0 overall on aggregate to give his team one foot on the plane to South Africa.

The Bosnians were struggling to make an impact and only a long range free kick from Bajramovic really troubled Eduardo in the Portuguese goal. Nevertheless, just minutes later Sejad Salihovic picked up a second yellow card for disent to leave Bosnia down to ten men and effectively killed off the tie.

Wolfsburg striker Edin Dseko had a good chance for the hosts towards the end but the night began to Portugal who celebrated qualification to the World Cup when at one stage it looked as if they would finish 4th in their group.

PORTUGAL: Is there still hope to see Portugal in WC2010?
New Portugal 2010 home and away shirt designs