The latest Iberian derby is set to be an explosive semi-final at Euro 2012. Spain are current Champions of Europe and therefore favourites going into the game but football isn’t always that straight forward and Portugal will put up a fight. The Selecção seem to be growing and growing into the tournament, while Spain’s tiki-taka is groaning a bit under pressure.

It’s hard to call the game as both sides are tactically matched. The Spanish are renowned for their attacking play but each of Portugal’s defenders are good trackers and commit themsleves to the cause. Equally Portugal are brilliant going forward. It could be a case of the team who gets the first goal controls the game but one thing is certain, this match is going to be a fiercely fought battle. With the overall Spanish squad twice the value of the Portuguese team it isn’t surprising that Spain out value Portugal in every department. Portugal’s three goalkeepers are valued just €0.2 million more than Spain’s third choice goalkeeper on his own (Reina, €19m). Its squad depth that lets Portugal down in the defensive department, their least valued defender (Lopes, €1.7m) is valued nearly five times less than his Spanish counterpart (Juanfran, €8m). Further up the list Portugal’s top defenders are each valued €10m less than their Spanish equivalent. In the midfield department Spain massively out way Portugal with their group of players being more than three times the value of the Selecção (€311m compared to €97m). Their ridiculously valuable midfield is €20m short of being worth as much as the entire Portugal team. Portugal’s top midfielder (Nani, €36m) is almost half the value of Spain’s top man (Iniesta, €65m). Even in the striker department Portugal are out weighed, despite having the worlds most valuable played in their squad. Despite Portugal having one extra striker than Spain they are still €1.2m short of the Spanish frontline.

Before the tournament, it was clear how Paulo Bento would set his team out. He’s maintained the same starting XI throughout, but will now be forced into a change.
Helder Postiga was removed with a hamstring injury during their 1-0 win over Czech Republic, so Hugo Almeida is a likely start in the central striking role. Nelson Oliveira, despite promise and potential, will not be trusted for a full 90 minutes in such a high-profile game.
There are three incredibly important roles in Portugal’s formation—fullback, anchor midfield and Cristiano Ronaldo.
Fabio Coentrao and Joao Pereira are two flying fullbacks, allowed to maraud up and down the line and help Portugal’s controlling 4-3-3 formation function.
Ronaldo’s role has changed throughout this tournament, ranging from unused left winger to the one person in this team able to break down a defence.
Lastly, Miguel Veloso is key. Consistency must be found for him, as he is required to fulfil two incredibly important duties.
He provides short, sharp passes out of defence to initiate attacks as a matter of course. He may be asked to provide longer, direct ones to Almeida or Ronaldo to skip between the lines and create quick counterattacks.
He also may have to track Spain’s key attacking threat and man-mark him into submission, just as he attempted against Mesut Ozil.

Spain’s footballing philosophy is clear to see right now, as they continue to assert themselves as a slightly toned-down version of Barcelona.
Such is the attempt to mimic La Blaugrana, we’ve seen Cesc Fabregas employed as a false-nine striker in two games out of four so far. It’s fair to say he’s no Lionel Messi in that position and lacks the threat of making genuine incisive runs.
The other option is Fernando Torres. Despite offering a dramatic, positive change to Fabregas against Italy, he still can’t find the back of the net against good opposition in this tournament.
The rest of the team is a settled constant. Jordi Alba has impressed, so much so he was the subject of a failed double right-back experiment by Laurent Blanc. In addition, the midfield three of Xavi, Sergio Busquets and Xabi Alonso remain unbeatable in the passing game.

Team News
Helder Postiga is Portugal’s only injury concern. Postiga is expected to be replaced by Besiktas forward Hugo Almeida. Spain have reported no fresh injury concerns. However, Fernando Torres and Pedro may be in line to start following claims the Spanish camp are “drained”. 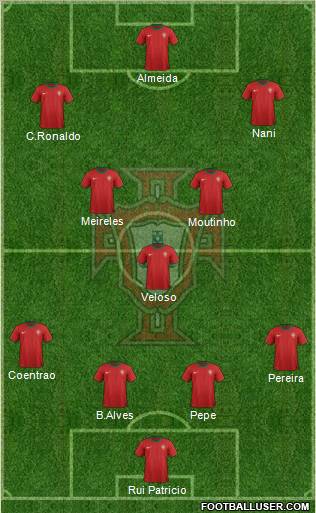 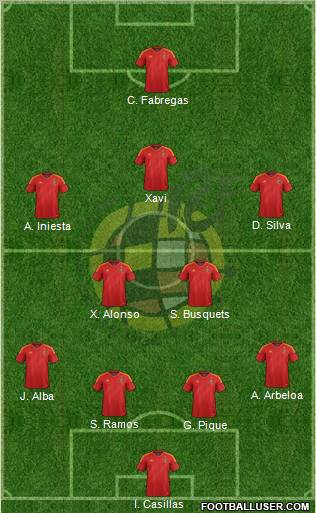