Euro 2012 has come to an end for Portugal so let’s take time to reflect on what an eventful tournament it has been for the Selecção.

Overall evaluation
Before the tournament everyone was certain that Portugal wouldn’t even make it out of their group so making it all the way to the semi-finals is no mean feat. The Selecção made a slow start to the tournament but once they got going they were easily one of the most dangerous sides in the competition. Obviously fans will be disappointed thatPortugalfailed to take their opportunities in their final game against Spain but overall the Selecção can be proud of their performance at Euro 2012.

Highlight of the tournament
Silvestre Varela’s late strike against Denmark. The substitute had only been in the pitch for a minute when he smashed in a right-footed shot after missing with his left and doing a little pirouette to get into position. The goal kick-started the Portuguese revival which without would have seen them out of the tournament.

Disaster of the tournament
The opening match against Germany. It wasn’t until an 80th minute goal from Mario Gomez thatPortugal realised that they were at a major tournament and probably should start playing football. Up until then they just weren’t in the game and seemed destined to exit the tournament in a dire state.

Star of the tournament: Pepe
Defending goals and even scoring goals, what else do you need from a centre-back? Pepe was one of Portugal’s biggest goal threats from set pieces and even racing forward on the counter. The Real Madrid star put in a solid performance in every goal and despite dropping off the radar in later games he still had a memorable tournament.

Flop of the tournament: Postiga
OK Postiga was injured for the final match and potentially could have been the hero that game however the games he did play in he really didn’t shine. Being the teams main striker he should have been the front man but so many times he wasted clear-cut chances or didn’t muster up any shots at all. Even his team seemed frustrated with him refusing to pass to him on opportunities.

Strengths
Perhaps rather surprisingly Portugal’s backline were their strongest area in the tournament, despite a shaky start. At times, especially in the group games, the unit looked likely to let in droves of goals but as the tournament went on, and the confidence grew, the line began to work together and their heroic defending versusSpainalmost saw them pull off a remarkable result. Also very importantly the defence, which are known for their ill temper at times, held their cool and despite picking up a few yellow cards no player was suspended or even looked in danger of getting into trouble throughout the tournament.

Weaknesses
The Selecção’s lack of a natural striker was obviously their downfall, failing to create a single shot on target in their semi-final match. The team found theirselves reliant on Ronaldo and the opposition quickly picked this up. Postiga was the team’s most experienced front man however going into the tournament there were questions over his goal-scoring credentials, scoring only nine goals in 33 appearances at club level this season, although that did make him the clubs top scorer. TheZaragozaman didn’t exactly shine at the tournament, scoring just one goal and spurning countless other opportunities. It’s a shame that the first man let them down as the rest of attack and midfield really came to life with both Ronaldo and Nani living up to their reputation. However at the next major tournament, World Cup 2014,Portugal’s young strikers should have matured so they shouldn’t have this problem for much longer.

Opportunities
Undoubtedly it will bePortugal’s young stars who offer the biggest opportunity for success in the future. Nelson Oliveira and Silvestre Varela look set to be the next Ronaldo and Nani with Rui Patricio already standing strong between the sticks. All three boosted their reputation in the tournament and are undoubtedly stars in the making.
The team also proved that they can adapt their style to match their opposition, something they hadn’t been known to do before. If Paulo Bento stays boss, and there’s no reason why he shouldn’t, thenPortugalshould pull of something big in the future.

Threats
Portugal’s big names are at their peak. The current batch of players may have missed their only opportunity to win a major trophy. The squad does have some young fringe players but the main bulk of the starting 11 won’t be around for much longer.

Finally lets end with a giggle: Ronaldo is still waiting to take his penalty 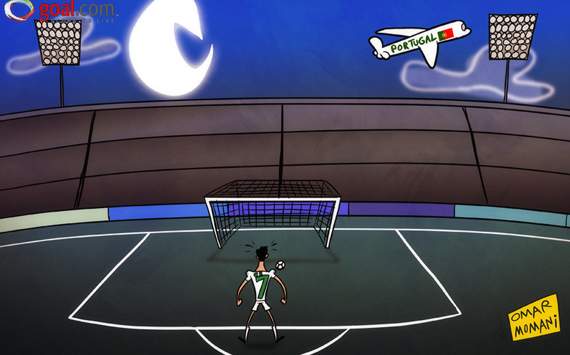