Portugal Euro 2012: What ‘the Selecção’ will be wearing

Drawing inspiration from the country’s past Nike will be hoping Portugal’s new patriotic kit will see them lift the Euro 2012 trophy. Here’s what they had to say about the design:

Portugal’s new home kit has been augmented with symbols from their glorious seafaring history. The new Portugal home kit is a classic design, featuring an all red body with an elegant green crew neck collar.

On the sleeves are green crosses formed from thin stripes, with the horizontal lines extending around the entire cuff, to represent the revered Portuguese national symbol, which was emblazoned on the sails of the ships Portugal’s explorers navigated around the world.

Inside the neck is an Armillary Sphere, an astronomical and navigation instrument, which these explorers used to discover the world. It has been a national symbol for over 500 years, featuring in architecture, and most famously as the background to the Portuguese shield on the national flag.

The new home shorts are red, while the new home socks, now with improved cushioning for greater comfort, are also red with a thin green stripe at the top and a small green cross on the back of each calf.

The kit is constructed using Nike Dri-FIT technology to wick moisture and are made out of 23 percent lighter fabric with 20 percent stronger knit structure than Nike’s previous kits. The shirts also feature laser-cut ventilation holes to promote localized cooling, to help regulate player temperatures during a match. 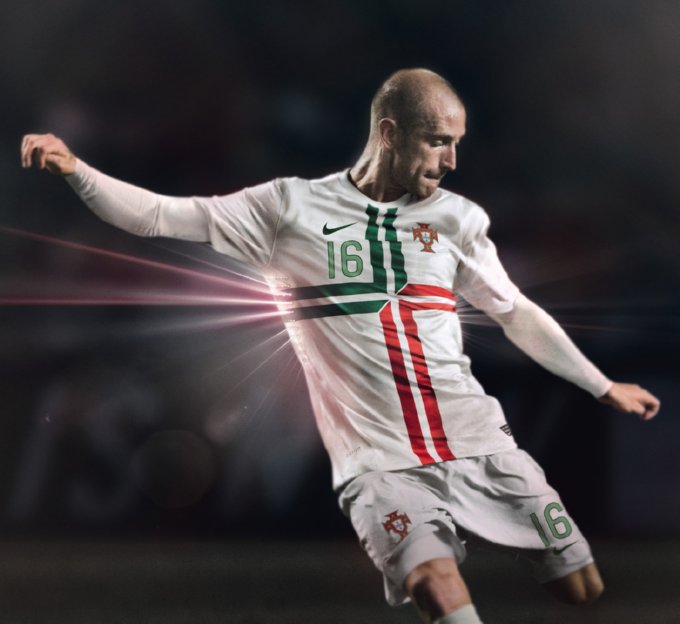 The away jersey is white with a large cross on the front – a revered national symbol that was emblazoned on the sails of Portuguese ships. The half-red, half-green cross is divided diagonally at the center to represent the Armillary Sphere, a Portuguese national symbol for 500 years and also found on the nation’s flag. Another Armillary Sphere symbol can be found inside the jersey’s neck.

The fabric is also up to 23 percent lighter than the version four years ago. Embedded with Nike Dri-FIT technology, the kits help to regulate players temperatures on the pitch by removing sweat from the body to keep them dry and cool faster than ever before.

Laser-cut ventilation on the shirt promotes localised cooling where athletes need it most so they can remain focused on the game.