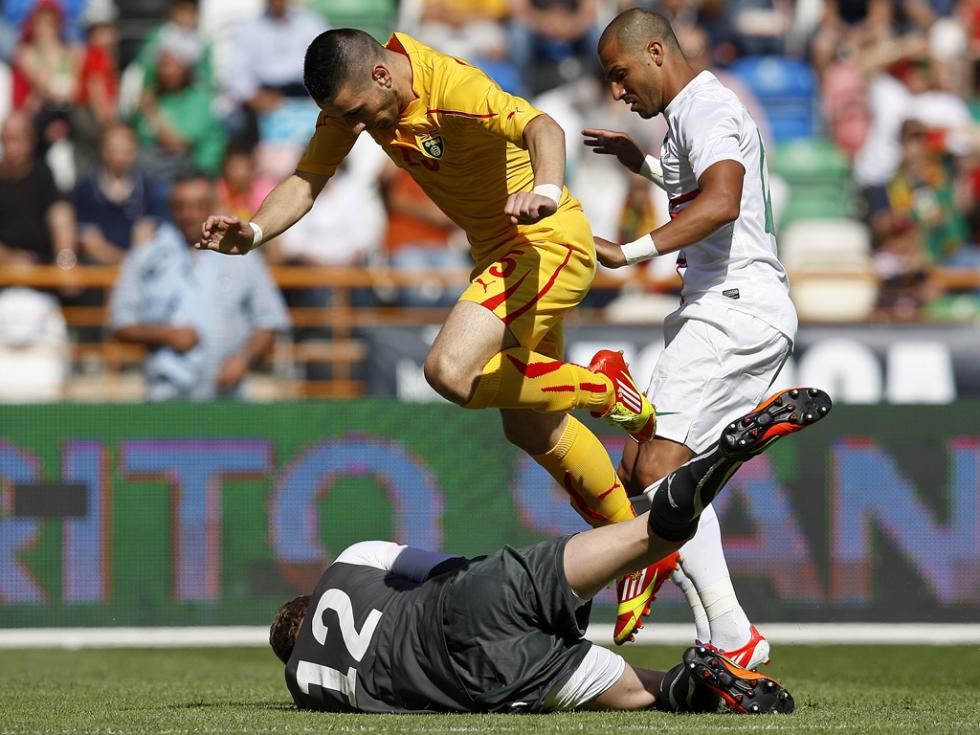 Portugal struggled to find the goal as they were held to a 0-0 draw at home to Macedonia in a Euro warm-up match that lacked fire and flair.

Paulo Bento’s side got their Euro 2012 preparations off to a stuttering start as they were stifled by the number of bodies that the visitors put behind the ball.

Portugal’s rare goal threats came mostly from Cristiano Ronaldo’s long-range efforts, but the captain had little support and couldn’t break down Macedonia’s packed defence on his own. Nani’s late entrance upped the pace but Portugal still lacked a spark.

Bento opted for an unfamiliar starting line-up, with Beto, Rolando, Rúben Micael and Quaresma all starting for the Selecção. Hugo Viana, called up after Carlos Martins’ muscle injury ruled him out of the tournament, was among the substitutes.

Portugal set out to control possession from the off but Macedonia remained disciplined, employing three centre backs and flooding the midfield with bodies.

Despite sending João Pereira and Fábio Coentrão forward early and often the game’s opening chance came from a set piece in the 11th minute when Ronaldo sweetly struck a free kick from the right corner of the box but it lacked any dip needed to test the keeper.

Portugal’s front line were struggling to create anything with Queresma and Helder Postiga only managing to create one chance each, both long range efforts both straight at the Macedonian keeper. Even Ronaldo could only muster up long range shots at best as the first half fizzled out in true friendly style.

The pace of the game was raised early in the second half as Fabio Coentão offered more of an outlet down the left while Ricardo Quaresma began to get the better of Yani Urdunov but the wayward finishing remained. Postiga was particularly culpable, squandering two chances manufactured for him by Coentrão and then Veloso soon after the restart.

Luckily for Portugal, Macedonia were also less than decisive in front if goal. The side failed to create a single shot on target in the first half but should have gone one up after the break when the otherwise solid Selecção defence lacked concentration. Vance Sikov was presented with the ball in an unmarked position in the six yard box on the 53rd minute but could only send his header over the bar.

Stung by this, Bento sent Nani and Hugo Almeida into the fray, and their introduction sparked a series of smooth passing exchanges with Ronaldo. However, when the captain skewed another shot wide on 72 minutes, he was replaced by Silvestre Varela – a cautionary change. Valera added some dearly needed width on the left which caused the visitors problems late on, but the finishing touch was lacking in what had been a very frustrating afternoon in front of goal.

The entrance of young Nélson Oliveira represented a final throw of the dice for Bento, as the frustrations of the crowd began to rise. The Benfica forward did manage to test Bogatinov in stoppage time, but just as had been the case for the preceding 90 minutes, it wasn’t enough to break the deadlock.