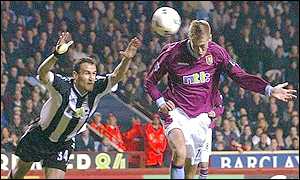 Despite a goalscoring weekend for Liverpool, it appears that Peter Crouch’s future lies away from Merseyside. Benitez has used him on an all to infrequent basis this season, preferring to partner Dirt Kuyt with Fernando Torres. Crouch himself seems frustrated by a lack of first team opportunities and was quoted after the draw at Arsenal as saying “I’ve got to be realistic, if I want to have any aspirations of playing for England, or furthering my career, then I have to be playing.”

One club who may be interested could be Villa. Although he didn’t have a very successful spell in the Midlands, the fans took too him and saw a work rate matched by few others.

He was signed by then Villa bossÂ Graham Taylor forÂ Â£5m in March 2002Â and scored on his home debut v’s Newcastle (pictured, above).

But this was a poor Villa team who created little or few chances and Crouch was given little few opportunities.Â A loan spell at Norwich was enough to convince Southampton to sign him in the summer of 2004 for Â£2m and this is where his career really began to take off.

Crouch could be compared with John Carew, but fitness has been a problem for the Norwegian and there is no doubt Crouch would bolster Villa’s attacking numbers.