Into his 3rd full season at Villa Park, John Carew has settled at the club and has established himself as a fan favourite and a force to be reckoned with in the Villa line-up. Since his transfer from Olympique Lyon – in exchange for Milan Baros – Carew has gone onto make 92 appearances in all competitions and contributing 34 goals up to present.
During the 2 full seasons that Carew has played in, he has helped Villa in the league and in particular, the UEFA Cup [now known as the Europa League].
Last season, Carew amassed an impressive 11 goals in 25 games in the Premier League, with several other goals in other competitions. 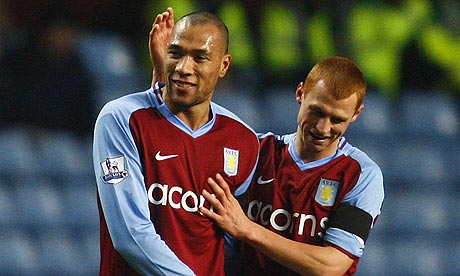 The 2009/2010 season has seen Carew as a regular in Martin O’Neills line-up. The Norway striker has 14 appearances to his name and has played his part in Villa’s rise to the top 6 so far.
Currently, the forward has registered 3 goals, with his last coming in the 5-1 thrashing of Bolton at Villa Park.
Carew’s other goals came in the 1-1 draw with Everton at Goodison Park and the Europa League qualifying round which saw the Villains crash out on the away goals rule.

Carew, in his career, has shown why he is such an important player in the Aston Villa set up. His aerial presence, strength and technique are what Villa fans are used to seeing, with the Norweigan able to knock the ball down from long ball situations to create more opportunities for fellow teammates.
However, this season has given Martin O’Neill a few headaches with selections, as Carew is similar to England International Emile Heskey, who was signed last season.
Fans of the Premier League are used to seeing Villa line up with Ashley Young on the left, James Milner on the right, Gabriel Agbonlahor upfront, but who he is partnered upfront with has been the subject of attention.
Heskey and Carew are often rotated as they are both players with similar styles. They are both there to provide strength in the attack and provide an ever lasting aerial presence. This balance in the Villa team gives opposition defenders a frightening thought.

Carew will aim to help Villa reach the top 4 in the league.

Onto the International scene, and John Carew has represented his country at the top level, an impressive 82 times. He has been playing for Norway since 1995 when he first played for the Norway Under 15’s.
From then, the 30 year old has played for 4 different age groups before finally cementing a first team spot in the senior team in 1998.
The Aston Villa forward has performed well at International level, scoring 22 goals in 82 caps. His most impressive cameo came in the Euro 2008 qualifying campaign, where he scored 4 goals and assisted 2 others in the 10 qualifying games which saw Norway finish 3rd.

Overall, the 30 year old is an ever present in the Villa dressing room. Carew will look to continue with his goalscoring ability and help Villa reach the top 4 of the Premier League.

Carew is seen as a fan favourite at Aston Villa.