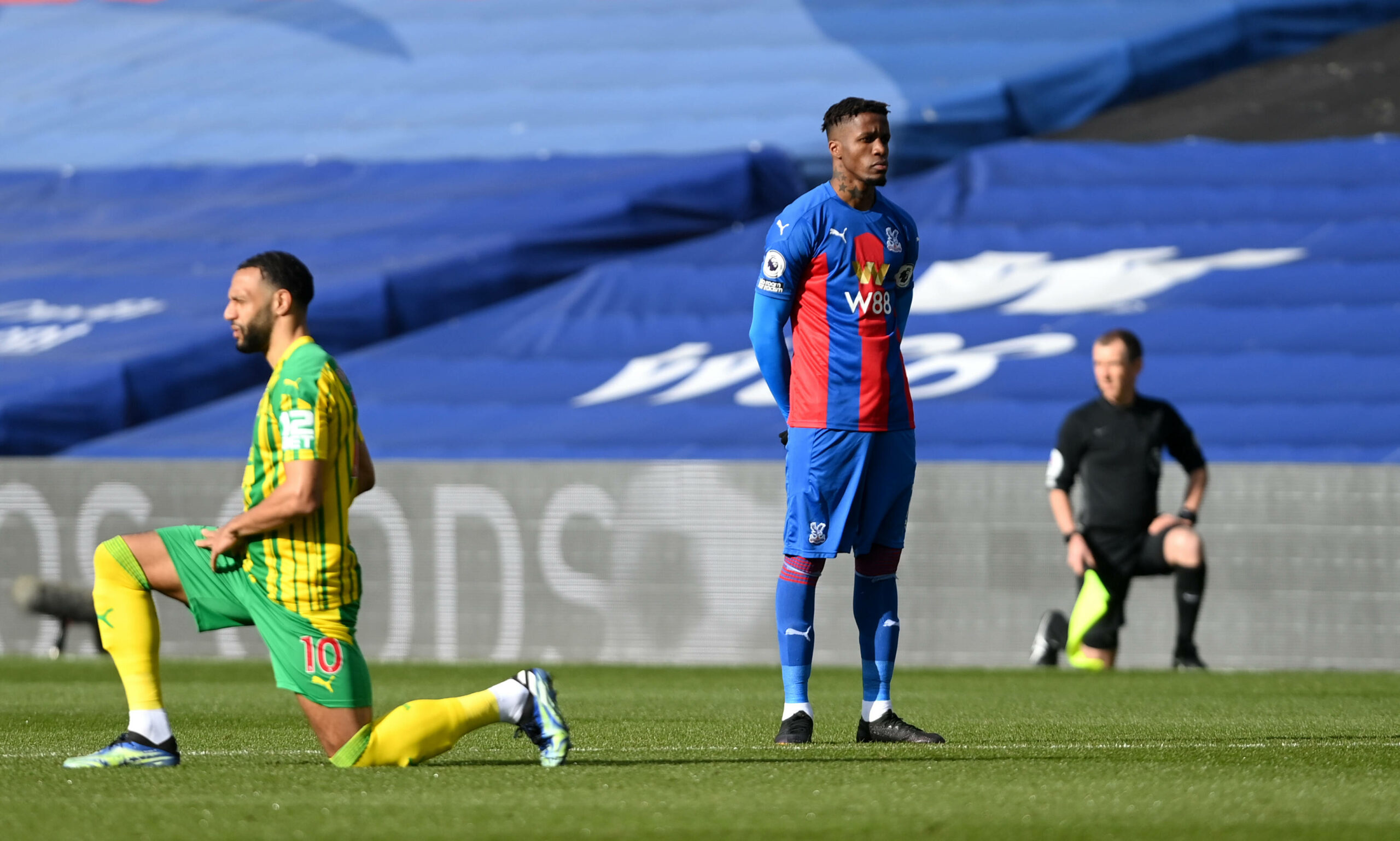 Wilfried Zaha has been saying for weeks that he’s no longer interested in taking a knee before kickoff to support ‘No Room for Racism’ because he believes it’s more important to stand tall in the face of bigotry.

The Crystal Palace wide-man added that kneeling isn’t having a positive effect and he feels like a target, so he’ll no longer take part. Zaha has been true to his word, standing while teammates kneel, but it’s upsetting seeing a black player losing hope.

Why kneeling is important

Zaha told the FT Business of Football conference in February: “I feel like taking a knee is degrading. Growing up, my parents just let me know that I should just be proud to be black, no matter what, and I just think we should stand tall.

“I think the meaning behind the whole thing is becoming something that we just do now. That’s not enough. I’m not going to take the knee.”

Zaha may feel kneeling to fight racism is alien to him and believes it makes more sense to stand, but he’s ignoring the history attached to the gesture.

A 1780s drawing of a black slave kneeling became an emblem of the British abolitionist movement (Global News) and the director of the Women and Gender Studies Institute at the University of Toronto says kneeling is about “articulating the promise and desire of freedom from oppression.” To say it’s important is an understatement.

Zaha may not be aware that kneeling has been a symbol for centuries, and now his stance is being celebrated by those who oppose the cause, so his decision looks like a defection. Many have ignored his quotes on why he’s standing tall and think he’s a opponent not a supporter.

This is not the case. Zaha believes in the cause, but I think he’s disheartened at the promise of change in football and nothing happening. There isn’t crowd trouble because the Covid-19 pandemic has forced a stay-at-home order, but there has been online abuse that shows no signs of slowing down. Many are brazen in their abuse and emboldened as punishments are lacking.

What is Black Lives Matter?

Black Lives Matter started as a movement devoted to tacking police brutality in the US and led to discussions about racial prejudice around the world. Diversity is prevalent in football and clubs quickly adopted kneeling as a defiant message against racism, but the authorities have been slow quashing abuse.

We see players attacked on social media by anonymous accounts who seldom face consequences for their actions, so what’s the deterrent? We hear of players alleging abuse from opponents, but then nothing comes of the claims due to a lack of evidence, so are we really moving forward?

It would help if all parties could agree on what kneeling represents too. Lyle Taylor was an outspoken critic in February, labelling the movement ‘Marxist’ while defending white players that don’t kneel, so he’s giving opponents a ‘get out of jail’ free card.

There are politics attached to Black Lives Matter (defunding the police, pro-union, medicare for all in the US), which is why the Premier League separated themselves and adopted ‘No Room for Racism’, so Taylor hasn’t been paying attention.

What’s worse is that his misinformation has been amplified and many blindly believe his words without fact-checking. Black Lives Matter don’t refer to themselves as a Marxist organisation on their website, but the label has stuck with critics.

It’s a powerful image seeing a team kneel in solidarity, but there is the risk of the gesture losing all meaning if it doesn’t come with action.

Twitter don’t intend to change policy on anonymous accounts, so fake profiles will still be able to abuse players. Facebook and Instagram will remove accounts that violate their terms and conditions, but they won’t force users to verify profiles with ID either.

The UK’s first football hate crime officer was only appointed in February, so the response to racism has been reactive not pro-active. And while there has been arrests for online abuse, players appear to be targeted every week, so the threat of criminalisation isn’t acting as a deterrent.

There are just two months of the 2020/21 season remaining and it doesn’t seem like much positive action has come from kneeling, so you can’t blame players for losing faith. This isn’t just football’s problem to fix either – there were 105,090 hate crime offences recorded in the UK last year.

Raising awareness is a start, constant education is beneficial and a zero-tolerance policy is essential – this is Kick It Out’s philosophy. Unfortunately, a BBC Sport report in September 2020 revealed there had been a 42% increase in reports of discrimination in English professional football, so it may feel like the battle is being lost.

The rise in reports may be down to people finding their voice, however, as many were silent in the past but now agree that enough is enough.

My message to Wilf

Endure. Nothing worth fighting for comes easy and this will be a long fight. The people we’re trying to change have held prejudices their entire lives, so a few months of kneeling isn’t going to make them reconsider – that’s a ridiculous fantasy.

Black footballers make up 25% of the players from 92 professional clubs, but visibility hasn’t been enough to quell racism, so education is the only avenue left to make a difference.

Every player and staff member of every club should be forced to undergo mandatory classes on race, a history lesson of the UK’s role in the slave trade and the truth of the British Empire. They will learn how racism was weaponised and see how black people still feel the effects of slavery today.

And after that, teams should consider walking off the pitch if racist abuse continues, so governing bodies get the message that games won’t be fulfilled unless the playing environment is made less toxic.