Every Team Has One! What, If Anything, Can Be Done About Football’s Diving Culture? 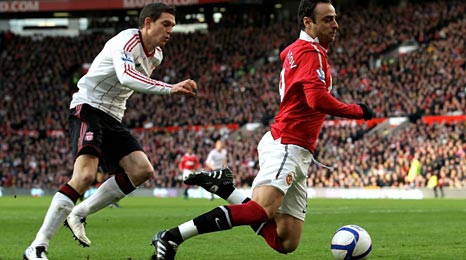 Dive or No Dive? The Berbatov incident is debatable...others are far clearer. Photo: BBC Sport

Today’s FA Cup encounter between Man United and Liverpool has sparked further controversy and debate over the tendency for football players in the modern game to ‘dive’ to gain an advantage. If given an honest assessment, you as a football fan will be able to pick somebody out from your team who has been guilty of what is being dubbed as ‘professionalism’. Perhaps you, the reader, will also concur that the business of what I deem to be cheating is becoming far too prevalent. So what can be done to stop it?

I was enjoying this weekends live FA Cup football until the 88th minute of Arsenal against Leeds, where Theo Walcott decided to have a go at a dive in order to get his team back in the game. We all know that following this incident, Walcott did in fact go on to earn a perfectly legitimate penalty which saved Arsenal’s blushes. Walcott after the match eluded that “I want to apologise because I actually dived. I was trying to win the penalty.” I do not recall too many football players who have come out publicly and admitted to trying to con a referee into giving a decision. The decision to do so may not have been wise from Walcott; but I digress.

Today’s encounter between Man United and Liverpool also brought a contentious penalty decision which has ultimately decided the outcome of the match. I do believe this one was more open to debate, but the fact remains that if Berbatov wanted to stay on his feet, I think he could have! Being in a less than favorable position to score meant that he did not; and the rest is history!

I am an Aston Villa fan and can openly admit that it is certainly creeping in to our team. Ashley Young time and time again hits the floor under very little pressure or contact. In my opinion, Young knows that if he gets a free kick, Villa have players including himself who can deliver a good cross and ultimately create a goal scoring chance. Furthermore, I do not condone his actions one bit!

Every team has them…Players like Torres, Gerrard, Eboue, Walcott, Van Persie, Rooney, Drogba, Malouda, Young are some examples of players who have clearly chose to dive. The list is huge and the real concern is that it is happening throughout English football; not just at the top level. I found myself listening to TalkSport earlier this evening, listening to football fans saying how sick they were of ‘soft’ football players doing literally anything to gain an advantage. No longer do I feel that ability to score a goal is always down to skill to beat a players, but rather the skill to act as if you have been impeded!

I do not imagine for one minute that anything can really be done about the diving culture within the beautiful game. Certainly, it has not began to happen in the last year or two, but it is becoming so prominent now that it is having a significant effect on the outcome of football matches. The FA have a disciplinary board, but I doubt dealing with diving is part of the duties of this particular group of people. Could we bring in a ‘Diving Board’ (excuse the pun)?

I suggest that retrospective action is taken against players found guilty of trying to con the referee. I am a believer that hefty fines should be given in clear cut cases; and subsequent action taken against the player in question. This method would of course present the age old problem that has prevented anything being done about it to date…What is a dive and is each case open to debate? I would imagine that a player would argue until the cows came home that he was fouled and ‘lost his balance’ under very little contact. We know that the likes of Arsene Wenger seem to turn a deaf ear and a blind eye to every incident that ever occurs. It will be very interesting to see what he makes of Theo Walcott’s diving admission; perhaps he has not seen or heard it!

Likewise, Football Referees are put in an incredibly high pressure situation when such incidents occur. I do not for a second blame referees, nor do I think favoritism exists in the refereeing community. I do however feel that perhaps the opportunity to review a decision in real time would improve the quality of the game.

You can all think of at least one example where a dive has had an impact on a match you have been watching. I am not sure that my suggestion of retrospective punishment will ever surface as being viable. I also believe that until something significant is done to cut it out, it will certainly continue. This business of Football is ultimately about winning, it just seems that winning at any possible cost seems to be reducing the quality and entertainment value of professional football.

FIFA, The FA, LMA, whoever it is…make a move, make a decision! Football is not heading the way football fans want it to. If you beat an opponent because of the fact you can imitate a foul, can you actually celebrate the victory knowing you have been better than your opponents…I think not!