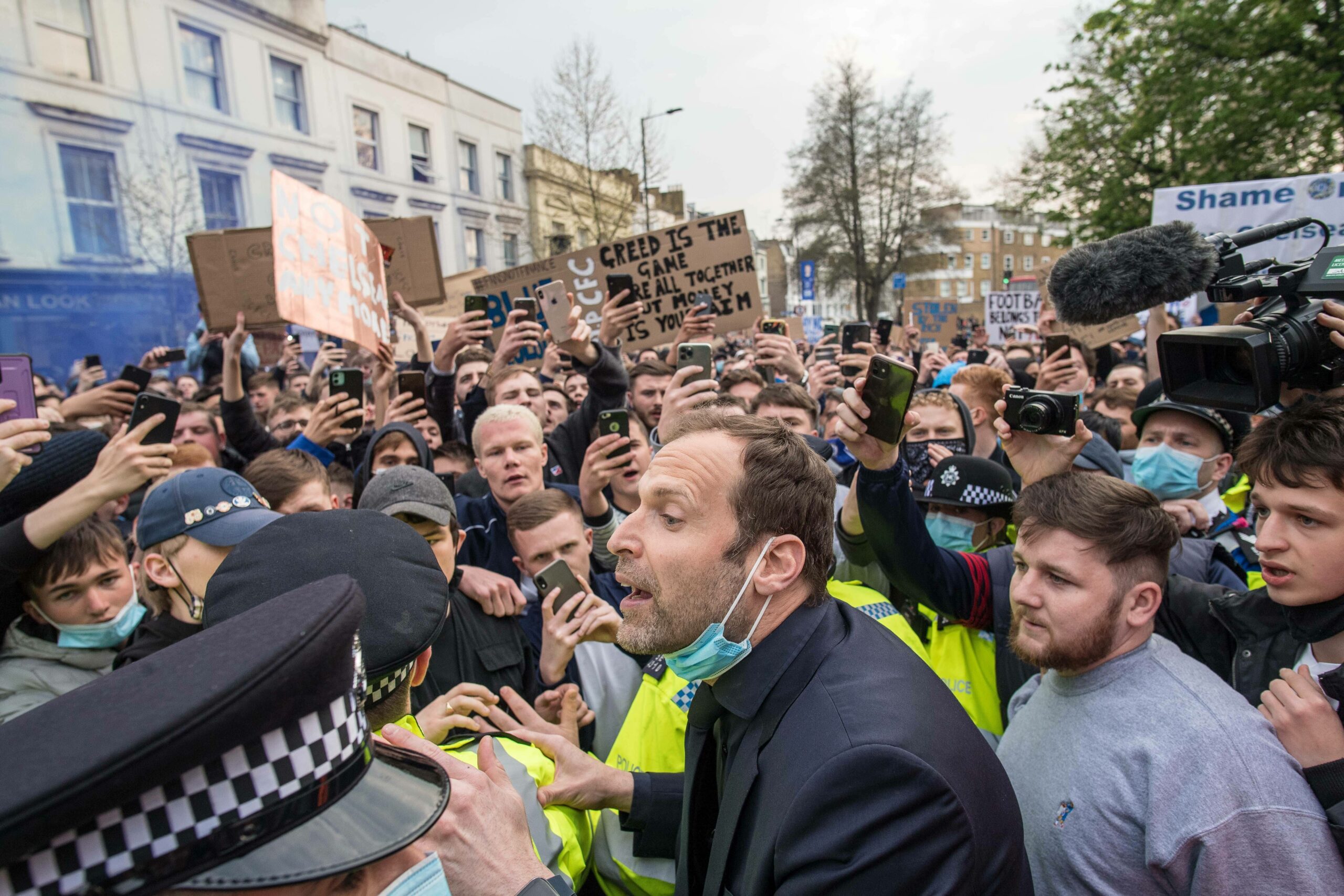 The last time we wrote in great length about the European Super League, we credited the rock you were living under for not cracking in the midst of the chaos in case you had not heard the news.

This time, though, even a hole dug right to the centre of the earth would not be enough to keep you from learning of the most recent development: The end of the Super League.

One of the sentences in that piece was: “As much as some might love to see it, a communist revolution seems quite unlikely in the footballing world.” The chances of it were low, but never zero, and as it turns out, we do have a revolution of sorts on our hands.

In an interview after the announcement of the European Super League, Florentino Pérez said: “We have to change something to make this sport more attractive at a global level.”

The Super League was to be revolutionary, only the revolution was going to strictly have the interests of the breakaway clubs in its agenda.

This revolution was not a sudden uprising, rather it was probably being envisaged for the last decade or so, with most proclaiming it inevitable when the Super League announced. Yet, less than 48 hours after its introduction, the Super League plans began to unravel.

Their first failure came right at the start when the likes of Bayern Munich and Paris-Saint Germain were not seduced by this devious initiative.

The ESL clubs tried to force their hand by leaving the ECA and UEFA, but all that did was pave the way for Karl-Heinz Rummenigge and Nasser Al-Khelaifi to take on the executive roles vacated by the Presidents and Chairmen of the Dirty Dozen.

They even tried to lure local rivals in Bayern’s case by inviting Borussia Dortmund and later RB Leipzig, but the Germans stood in defiant unity.

In fact, almost the whole of the footballing world stood in defiant unity – including the supporters of these breakaway clubs, now deemed ‘legacy fans‘.

Protests were organised, both online and in person. Even the most impossible symbolism of unity in the footballing world occurred when a Manchester United fan condemned a no-fans type joke directed towards Manchester City in r/soccer.

This one comment may seemingly be insignificant, but it speaks volumes of the gravity of the situation. The Super League had done what very few other things had achieved – it united every single football fan in its opposition.

Liverpool fans protested outside Elland Road as their team prepared to face Leeds United, with some probably not even wanting to see their side win.

Chelsea fans went one step further, as a crowd that probably exceeded a thousand gathered outside Stamford Bridge before the Blues faced Brighton & Hove Albion and even blocked the team bus from entering the ground, even forcing Petr Čech to come out and attempt to negotiate.

Soon after they let the teams enter the stadium (prompting a delayed kick-off), the crowd was celebrating a great victory. Their team was held to a goalless draw by Graham Potter’s xG-underperforming Seagulls, but that barely mattered.

What mattered was the reports that were emerging which suggested that Chelsea were set to pull out of the European Super League, which meant that they – the fans – had won.

The fans were not the only ones who were involved, though. Boris Johnson made his views on the matter quite clear, proclaiming that ‘all options were on the table‘ to stop the Super League.

His views were, unbelievably, echoed by the opposition too, as Keir Stammer condemned the idea as well. French President Emmanuel Macron shared similar views as well, marking his and Johnson’s first post-Brexit agreement.

The Super League truly has, as promised, delivered ‘excitement and drama never before seen in football,’ possibly doing more than just that.

The clearest voices for these clubs, however, probably came from within. The likes of Bruno Fernandes and James Milner were the first ESL players to condemn the concept.

They were backed by a host of others both from within the breakaway circles and outside, including many from the Liverpool squad led by captain Jordan Henderson, who also organised a meeting for all Premier League club-captains.

From Everton to Spartak Moscow, clubs outside the Dirty Dozen made their feelings quite clear through various means. Ex-players, legends and pundits showed no kindness whatsoever either, with Micah Richards (with Roy Keane, obviously), Gary Lineker, Jamie Carragher, and above all, Gary Neville, among others, making their thoughts known.

One of the most cowardly things that the executives of these breakaway clubs did was to leave their players and managers to face the media after not even briefing them about the issue, let alone giving a public explanation themselves.

While some chose neutrality, the likes of Jürgen Klopp and Pep Guardiola made their opinions quite clear, with the latter’s press conference even being cut short by his club.

While public condemnation has a certain level of effect, nothing can beat direct internal confrontations. As aforementioned, the executives of the Dirty Dozen were cowardly, with some even delaying their talks with the players after failing to provide an explanation before or even in the immediate aftermath of the announcement.

Those who did speak got properly spoken to, as was the case at Manchester City where Fernandinho, Kevin De Bruyne, Raheem Sterling, Kyle Walker and many others raised their voices on this issue internally.

Things escalated further at Manchester United, where captain Harry Maguire confronted Ed Woodward in a meeting. Not too long thereafter, the executive vice-chairman of the Red Devils announced his resignation effective from the end of the season, although the Super League was not mentioned in the statement.

Whether Woodward planned to step down at the end of the season is a different discussion, but one thing is certain – he was never going to announce it on a mid-April night.

This decision lays bare the utter incompetence of many of those running these ‘elite clubs’. When the Super League was announced, most experts suspected that all of the clubs involved would have thought this through given the fact that they had been working on this for so long, and also that the executives’ personal interests rested on the situation.

They were expected to hold all the cards to, at the very least, convince UEFA to take them back in after forcing it to accept a host of reforms that would give these clubs yet more control. Many expected this to all be a huge pressure tactic, but as it turns out, this whole ordeal was one massive roll of the dice – one which failed bombastically.

Woodward might not have been fully at fault for this – Joel Glazer was clearly the leader of United’s initiative in this regard, and he did not attempt to hide that fact. Naturally, therefore, fans want the owners gone too, as is proven by the trending #GlazersOut on Twitter.

There is a high chance that they will not walk alone, #FSGOut and #KroenkeOut are trending as well, while Agnelli and Pérez are under some serious pressure too. In either case, these owners and clubs must be punished for their treacherous actions.

All 12 clubs have to be disciplined – even if to varying extents with more mercy shown to those who backed out first – to ensure that they do not try these tricks again soon.

Some have suggested that Germany’s 50+1 rule – which certainly had a massive part to play in its clubs not joining the breakaway party – should be implemented in England and elsewhere too. This would take some doing, though, and it sounds quite unlikely both legally and logistically, potentially making it a step outside the realm of possibility.

However, while the swift disbanding of the European Super League is certainly a massive victory for football, we must not rest here.

In the last two days or so, we have witnessed the irresistible power and effect that a unified footballing community possesses, even when faced with 12 of the biggest clubs out there.

Yet, football as a whole is still under threat, and when we have the chance, we must work to eliminate them. UEFA and FIFA are no saints – the former just slipped a very Super League-like model of the Champions League and started working on a funding deal worth over $7 billion in the midst of this chaos, while typically taking centuries to act in clear cases of racial abuse.

Broadcasters who were openly bashing the concept and siding with the average fan seemingly forgot that they were the ones charging nearly £15 for one person to watch Brighton and Burnley play out a 0-0 draw on their television set.

The purity of football has long been spoilt by money-hungry people in positions of power, and while the harsh reality is that there will always be a business side of the sport in the modern world, we can at least attempt to restore some of what we have lost. If there ever was a time to do that, it is now, when the whole community is united.

The players hold ALL the power in European Super League situation
The Disruptors: Past incidents that galvanised the world of football