Well it has been a quite but a very interesting January transfer with Balotelli shipped back to Italy or Odemwingie sitting in his car outside QPR or David ‘Jesus Christ’ Beckham giving his euros to the needy French children at PSG. Lets look back now at the 5 top transfers of this window ; 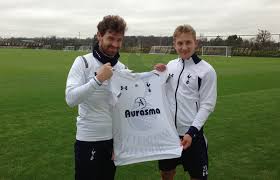 The German international was already set to hit our shores in the summer on a free transfer, but  Spurs have decided that they would bring the 22 year old in the window for just a €1.75 million to help with the champions league push. I haven’t seen much of the player but from what I have heard he’s very good player similar to Van De Vaart and will more than likely be playing that role where the Dutchman used to play and what spurs have been missing so far this season.

The young goalkeeping star snubbed the  chance to play for European champions Chelsea to play first team football at Stoke City which shows that there is some individuals who aren’t so money driven ,  but the keeper is back at struggling Birmingham for the time being. The  £3.5 million price tag seems a bargain for such a talented shot stopper, but this brings question marks over the clubs current number one Begovic with strong rumours leading us to believe he may be off to Manchester.

Any move involving golden balls is a big move and even though the English legend is on his last legs at the age of 37 he still has a lot to offer for any team. This move helps his and PSG’s image more than anything with a considerably amount of  money coming there way with shirt sales and also the kind gesture by Beckham doing his PR  a world of good.

The Long transfer saga ends in the most unlikely location with the Dutch wizard Wesley ends up in Turkey. The Dutch midfielder had the world at his feet in 2010 helping Inter to the treble including the champions league and also helping  the Netherlands to the world cup final, but since then he seems to have flickered out and has spent most of the season on the bench in dispute with the club over his contract. With many England clubs sniffing around the player he sealed his £8.4 million move to Turkey and with the club also bringing Drogba could Galatasary become one of the big European giants ? if the Dutchman finds form I don’t see why not.

The will he ? wont he ? drama surrounding the young superstar finally ended with Manchester United beating teams such Tottenham and Arsenal to his signature with a hefty £15 million price tag but Ferguson seems adamant that it will prove critical for the future of the club. The winger is back at Crystal Palace for the remainder of the season to help his club to promotion, we will have to wait till next season to see Zaha week in week out but I’m sure it will be very much worth it.

Just another quiet deadline day!
A New Hope For Reading