Villa battle to a hard earned point, but fail to raise the bar

In a derby that already means so much to so many, it was the added twist of the fixture taking on the subtext of a ‘relegation six pointer’ that added gravitas to a tie that, in the end, failed to provide either side with the haul of points they would initially have been hoping for.

With Villa desperate for points to carry them away from trouble, yet missing key men Emile Heskey and Ashley Young through suspension, manager Gerard Houllier showed admirable attacking intent with a forward thinking 4-4-2 line up, restoring Gabriel Agbonlahor to his preferred centre-forward role and deploying the exciting Marc Albrighton and the dangerous Stewart Downing on the wings, either side of a midfield pairing of Nigel Reo-Coker and Stiliyan Petrov. Young Kyle Walker kept his place at right-back after impressing against his home town club Sheffield United in the FA Cup last weekend, whilst Richard Dunne continued his Villa renaissance alongside James Collins, with Ciaran Clark again tasked with filling in at left-back.

To their credit Villa began the game in style, playing with a freedom not often seen amongst relegation threatened sides. Inside the first minute Agbonlahor had a golden opportunity to give the away side the lead, but could only shoot over the bar when well placed. Seconds later Downing was angling a twenty yard drive just wide of the post. Carew was the next man to go close as he flicked Agbonlahor’s knock down from a Walker cross goalwards, but saw his crafty effort skip off the top of the bar, as Villa tried to make their solid start count.

Though he brought little to the team in terms of movement, Carew’s presence up front
caused problems as he hit the crossbar twice


But Birmingham, despite Ben Foster looking shaky as he tried to banish the ghosts of Wednesday night’s error at Upton Park, weathered the early storm, and began to get a foot in the game. Reacting to his, Houllier altered this formation, dropping Agbonlahor into a withdrawn wide-forward role on the left hand side, and bringing Downing into the middle. The effect was dramatic, as Villa noticeably faded, and were lucky not to be punished when Craig Gardener robbed Walker as he dallied on the ball on the edge of his own area. The ex-Villa midfielder’s cross found Matt Derbyshire unmarked just three yards out, but inexplicably, the striker failed to make contact with the ball. Villa’s sole goal scoring opportunity in the remainder of the first half came when Clark’s over hit cross from the left glided past a horrified Foster who, like a rabbit caught in the headlights, could only watch on as the ball cannoned back off the crossbar.

As the half drew towards a close Birmingham felt they should have had a penalty when first Gardner’s cross struck Walker in the box, though not conclusively on the arm or from a significant enough distance for it to have been judged deliberate, before the rebound fell to David Murphy in the box who took a tumble with Albrighton in tow. Albrighton’s attempts to deal with the presence of the defender were clumsy, but Murphy was already on his way down before contact was made and referee Mark Clattenburg waved away the appeals.

Birmingham did not have to wait long for their breakthrough however, as just two minutes into the second half Gardener’s fiercely struck thirty yard free-kick cannoned into the unsuspecting Murphy, and fell kindly to Roger Johnson, who expertly directed a first time half volley past Brad Friedel to hand his side the lead.

Going behind at least stirred Villa back into life, and they began to take hold of the game. Clark showed real perseverance to get to his feet from two Birmingham challenges on the left touchline, retaining the ball in the process, before striding into the box. His powerful cross struck Johnson on the arm, and deflected agonisingly wide as Villa pressed forward for an equaliser. Replays showed Johnson leaning into the ball, though the pace of the cross made the incident a difficult spot for Clattenburg.

As the game approached the hour mark, and with the away side now dominating possession, Birmingham hit back on the break, finding Derbyshire free on the right who was through against Friedel. The big goalkeeper got a touch to Derbyshire’s strike, but the ball squirmed across goal before Walker launched it clear. Seconds later Gardner battered a volley wide from just inside the area after solid work down the right from David Bentley as Birmingham looked to double their lead.

With seventy minutes up and his side still behind Houllier made a double change, replacing the lively Reo-Coker with Barry Bannan, and the leaden-footed John Carew with Nathan Delfouneso. The impact was immediate, as just two minutes later Albrighton’s right wing cross was flicked on by Agbonlahor towards James Collins, who swivelled and hit a half volley towards goal that deflected off Ridgewell and into the back of the net. 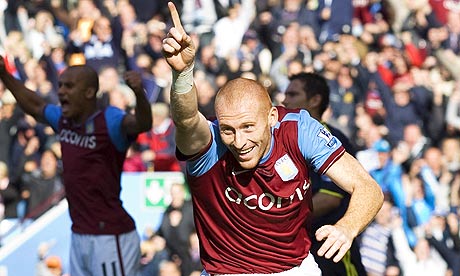 
Now sensing a winner, Agbonlahor spun away from his man wide on the right on the halfway line, and drove towards goal. Though his cut back to Delfouneso was just behind the striker, the young substitute was able to keep the ball moving on to the arriving Downing, whose lashed shot from ten yards was well saved by Foster.

Dunne was then in the thick of the action at both ends of the field as first his expert intervention prevented Birmingham replacement Nikola Zigic from capitalising on a long diagonal ball to the back post, before he then saw his own back post effort cleared off the line by Ridgewell at the other end from a well worked short corner.

Both sides had a late chance to win the game, as first Delfouneso picked up on a loose ball some twenty-five yards from goal before thundering an effort off the bar, the fourth time Villa had struck the woodwork in the match. Zigic’s chance to seal a late win was even more dramatic as the striker rose to meet a long free-kick four minutes into injury time. The towering Serbian striker beat the onrushing Friedel to the ball but could only glance his header agonisingly wide.

Though neither manager will have been keen to settle for a point before the game, a draw was a fair result, and probably a relief to both managers in the end, as they each saw their sides under spells of real pressure at different stages of the game. Though it may only be a temporary relief, the point carries Villa out of the relegation zone on goals scored, though with Manchester City next up for Houllier’s men improvements are needed if they are to stay out of the drop zone.

Makoun completes protracted move to Villa Park
Darren Bent at Aston Villa…Fantastic! However, why was Martin O’Neill not given £18m for a Striker?