Gerard Houllier faced some tricky selection decisions going into a difficult game against a Chelsea side desperate to arrest their recent decline in form. Villa’s own squad, reeling from a thumping at Eastlands on Tuesday, clearly needed some form of shake up, and Houllier’s solution was to recall Richard Dunne, recently stripped of the captaincy, to a side filled out with some of the senior players who have been kept out of the team by the youngsters in recent weeks.

Houllier’s thinking was clear, telling the press before the game that ‘ It is a conscious decision to play an experienced team, because we are playing the champions’. The Frenchman reverted back to the 4-2-3-1 system he used during his first few weeks in charge, with Carlos Cuellar and Ciaran Clark having to fill in as full-backs, behind Nigel Reo-Coker and the fit again Stiliyan Petrov. An attacking trio of Ashley Young, Stewart Downing and Gabriel Agbonlahor would look to support Emile Heskey, who was charged with leading the line against a Chelsea centre-back pairing of John Terry and nineteen-year-old Jeffrey Bruma.


After a quiet start to the game in which the 41,222 packed into Stamford Bridge barely seemed awake such was the lack of atmosphere around the ground, the game stirred into life on twenty-one minutes thanks to the most dubious of penalty awards. Frank Lampard’s deflected shot from the edge of the area looped up into the box and as James Collins rose to clear the ball Florent Malouda backed into the Villa defender, before spinning underneath him and theatrically throwing himself to the ground. Referee Lee Mason interpreted Collins leap as a foul however and Lampard expertly dispatched the resulting penalty with power.

Visibly seething at this injustice, Villa threatened to lose their discipline as first Heskey, then Young, fouled dangerously, before Reo-Coker followed Petrov, Friedal and Collins into the referee’s notebook for a highly debatable foul on Didier Drogba, the latter two having been booked for their protests over the award of the penalty.

Perhaps spurred on by their perceived ill treatment at the hands of the referee, Villa could have been level on thirty-eight minutes as Downing’s clipped ball into the box evaded everyone and fell kindly to Dunne on the back post. Barely six yards out, the Irishman could only scoop his volley over the bar however, much to the relief of Petr Cech.

But Villa did not have to wait long for their equaliser as Paulo Ferreira’s hashed clearance deflected off Downing and into the path of Reo-Coker, before the Villa player could seize control of the ball though he was sent crashing to the ground by a wild challenge from behind by Michael Essien. If Chelsea’s penalty was dubious, Villa’s was as clear as day, and Mason wasted no time in pointing to the spot. Young’s finish from twelve yards was just as powerful as his England colleagues, and sent the away fans into rapture. It was no less than Villa deserved, following their best half of football since Manchester United were shaken by a claret and blue onslaught back in November.

As the second half began there was a real feeling that Villa could get something from this game, if they could keep eleven men on the pitch, and Villa quickly backed this up as they took the lead just two minutes into the second half through Heskey, who out-fought and out-jumped the young Bruma to head home Downing’s superb right-wing cross from six yards out. 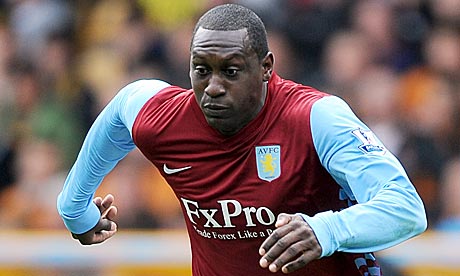 
Though Chelsea were clearly not at their best they still had plenty of fight and pressed forward in search of an equaliser. On fifty-five minutes Ramires shot wide across the face of goal when well placed, before Friedal saved expertly from Lampard’s close-range volley after a lovely lay-off from an admittedly offside Malouda just after the hour mark. Malouda was the next man in blue to be thwarted by the excellent Friedal as the American spread himself to block the Frenchman’s shot after he had been deliciously played in by defence-splitting through ball from Lampard.

There’s been plenty of speculation in the press lately that Dunne is on his way out of the club following reports of his falling out with the club’s management and his loss of the captaincy. Should Dunne leave his incredible last ditch tackle after seventy-two minutes on the quickly advancing substitute Saloman Kalou, saving an almost certain goal, would be a wonderful parting gift. Alternatively, it might be the defining moment that relaunches the big defender’s Villa career. Either way it was defending at its very best.

But with Villa sitting deeper and deeper Chelsea were soon controlling the game. Dunne revealed the infuriating opposite side of his game as he failed to deal with a routine ball into the box, which fell to the feet of the so far ineffective Drogba. The forward showed his true ability though, keeping his head to slot home past a posse of Villa defenders lacking even an ounce of the striker’s composure. As the old saying goes, form is temporary but class is permanent.

And so it transpired. There was a grim air of predictability as with just a minute of normal time remaining Chelsea seemed to steal the win. Substitute Marc Albrighton lost the ball under his feet when well placed to clear and from the resulting cross Drogba’s bullet header was stunningly saved by Friedal, before John Terry agonisingly turned in the rebound. For all their hard work, it seemed that Villa were destined to leave Stamford Bridge empty handed.

But football has limitless potential for surprise. Albrighton, just seconds ago the villain, was suddenly the hero as his sublime, perfectly-weighted, ball found the young Ciaran Clark who had ghosted into the Chelsea box. Time stood as still as the Chelsea defence as Clark guided a subtle header into the bottom of the net for a remarkable finish to a truly remarkable game.


Villa will no doubt feel they could have had the three points, but given the rather toothless nature of their recent displays they can take great pride in a truly spirited performance against a Chelsea side far better than their own recent results suggest. Despite the return to action of some of the more senior members of the squad it was once again Villa’s youngsters who stole the show, with Clark fantastic throughout and deserving of his most dramatic and unexpected of equalisers.

Though Villa remain in trouble at the wrong end of the table performances such as today’s, coupled with some shrewd work in the transfer window, should see Villa’s young starts burning bright at the right end of the table for some time to come.

The January sales and the question of age; Why Houllier might not be welcoming another New Year
What To Expect Of Houllier And Villa?