This game followed the script of the reverse fixture earlier this season at Goodison Park with both sides cancelling each other out in what proved to be a frustrating afternoon for both sides. Aston Villa went into this game on the back of four straight home league defeats with Everton win less in their last two league fixtures.

Alec Mcleish decided to bring Shay Given back into the team after a seven game absence at the expense of the unfortunate Brad Guzan. New loan signing Robbie Keane could only find a place on the bench with Villa preferring to stick with Darren Bent as the lone striker with Gabriel Agbonlahor and Steven Ireland in support. For the visitors, new signing Darron Gibson went straight into the starting line up.

The game started slowly with neither side exactly bringing the crowd to their feet. Villa Park was silent for most of the afternoon, in particular during the first half in which the home side struggled to find their passing range. At times the approach play from Villa was very sluggish and lacked any real flow. The home supporters grew agitated at the lack of creativity on show. It was the away side which had the first clear opportunity of the game. A curling free kick from the left by Leighton Baines was met by the head of Louis Saha who was superbly denied by Shay Given at his near post. The toffees began to find success down the flanks with a menacing cross from Landon Donovan only just evading Saha.

Down at the other end a clever piece of play between Bent and Agbonlahor released Albrighton at the back post but Drenthe managed to get back in time and clear the ball to safety. From the resulting corner, James Collins put a free header well wide. The best chance of the half for the home team fell to Agbonlahor in the 42nd minute as he cut inside from the left crashing a low drive towards the far corner. Howard expertly managed to tip the effort around the post.

The start of the second half saw neither side make any changes with the home supporters looking for something to cheer about. In the opening exchanges of the half Shay Given was once again called into action saving a bullet header from Fellani with his chest. This seemed to spring Villa into life with Bent hooking a shot towards goal that sent the crowd roaring. Moments later in the 56th minute the home fans patience was rewarded with the opening goal of the game. A cross from the right-wing from Albrighton caused chaos in the Everton penalty area with the ball eventually falling to Bent inside the six-yard penalty area who coolly slotted the ball past Howard into the roof of the net. Moments later Bent almost had a second but his header was well kept out by Howard. 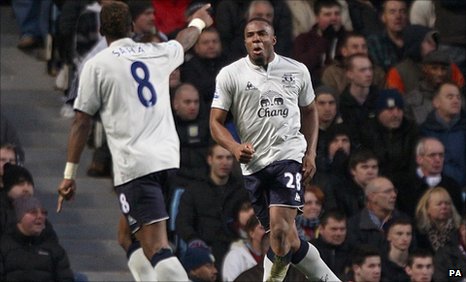 Everton’s response on the hour mark was to bring on Victor Anichebe for Royston Drenthe. Within ten minutes the move by David Moyes had paid off. A clever ball from Donovan split the Villa defence with Anichebe able to stay on side and calmly slot the ball past Shay Given for his third goal of the season. The goal came at a time when Villa had seem to be getting on top in the game.

In the closing ten minutes Vila fans got to saw the man they had been waiting for with on loan signing Robbie Keane brought on to replace Warnock. It was an interesting substitution from the home side and a signal of their intent of winning the game. Another debutant, the tiring Darron Gibson was replaced by Everton with Diniyar Bilyaletdinov coming on in his place. The closing moments saw only half chances for either side. As the board went up for four minutes of added on time Steven Ireland was named around the ground as the official man of the match. Referee Mark Clattenburg brought an end to the game with what over all proved to be a fair result.

With the point Villa moved up a place to 12th with Everton breaking into the top half of the table in 10th.

Man of the Match: Steven Ireland

Game: Swansea City vs Aston Villa, Result: Meaningless
Super-sub, Returning to a Bench Near You? Will Ole Gunnar Solskjaer Take On Aston Villa