Gerrard Houllier and Arsene Wenger may be countrymen and great friends off the field, but both had to put aside their respect for each other as their teams faced one another in the weekend’s early Premier League kick off.

Arsenal, nursing their wounded pride after back-to-back defeats at the hands of Tottenham and Braga, seemed ready to dish out a hiding, and having not lost to Aston Villa away from home in twelve years, and with Villa’s own squad ravaged by injury and illness, it seemed that the Midlands outfit might be the unlucky recipients.

Indeed Wenger’s men started with the bit between their teeth. Barely twenty seconds had elapsed before Stephen Warnock gifted the ball to Andrei Arshavin, who played Marouane Chamakh in on goal. The Moroccan’s attempted flick over Brad Friedal was partly deflected by Richard Dunne but still required the intervention of James Collins, who cleared the ball off the line, to prevent Arsenal from taking an early lead. 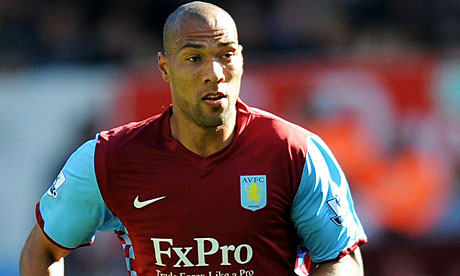 
Frighteningly Arsenal were able to raise their game another gear within the opening period. After three minutes Jack Wilshere’s delightful through ball found Tomas Rosicky in acres of space within the Villa penalty area, but the Czech midfielder could only drag his shot wide of the far post. Rosicky was presented with a another glorious chance just ten minutes later as he easily beat Dunne to Chamakh’s flick-on but, from the edge of the box and with only Friedal to beat, he could only fire tamely at the goalkeeper.

After weathering the early storm the hosts then enjoyed their own sustained spell of possession. On twenty-five minutes Stewart Downing’s inswinging cross was flicked on by Ciaran Clark but Ashley Young, ghosting in at the back post, could only poke the ball over the bar. The biggest opportunity for the home side came twelve minutes later as Warnock’s cross into the box struck the raised arm of Wilshere. There was no real cry of appeal from the Villa players, but the replays confirmed that it should have been an obvious award.

Often accused of lacking a ruthless streak, Arsenal nevertheless cruelly took the lead seconds later. As the ball was launched clear Villa defenders James Collins and Luke Young tangled on the halfway line allowing the ball to break to Arshavin wide on the left, who ran with purpose at Dunne before cutting inside and, from the edge of the area, slotting the ball inside the far corner off of Friedal’s glove. A minute later Arsenal should have doubled their lead as Samir Nasri latched on to another superb pass from Wilshere, before taking the ball around Friedal and forcing it wide from a tight angle.

Arsenal did extend their advantage just before the interval however. Bacary Sagna’s right wing cross was headed at goal from point blank range by Chamakh, before Friedal flung out a hand at the last possible second to push the ball wide. From the resulting deep corner however Nasri lashed the ball goalwards from eighteen yards, with the unfortunate Luke Young inadvertently diverting the ball beyond the despairing Friedal to give Arsenal a two goal lead at the break.

No doubt fearing a second half rout, Houllier tweaked Villa’s set up at half time, withdrawing the ineffective Robert Pires in favour of young Nathan Delfouneso, who joined Carew up front as the home side switched to a four-four-two. The rewards were almost instant as Villa, having started the second period brightly, pulled a goal back through Ciaran Clark, whose vicious twenty yard volley evaded Fabianski due to in no small part to the presence of Carew in an offside position just a yard in front of him. The big striker was clearly impairing Fabianski’s view and the decision to award the goal was as bizarre as the failure to award the blatant first half penalty.


Aston Villa’s joy was short-lived however as just five minutes later Arsenal restored their two goal advantage through Chamakh, who cooly prodded the ball under the onrushing Friedal from Rosicky’s defence splitting pass. Arsenal, confident they couldn’t throw away a two goal lead twice in the space of a week, began to dominate possession, but Villa remained a threat on the break. On sixty-eight minutes Clark should have had a second as the youngster latched on to a loose ball in the Arsenal box, but could only drill his shot agonisingly wide of the near post.

Just two minutes later though Clark did have the second goal his performance and determination deserved as another deep corner was headed back towards goal and Clark who, just six yards out, glanced home off the underside of the bar, with the ball ricocheting down just the right side of the line. Sensing a dramatic comeback Villa Park stirred, and the home side pushed forwards in search of a crucial goal, but too often they lacked the final ball to make Arsenal pay. With Villa chucking bodies forward in increasing desperation, Wilshere was able to head home Arsenal’s fourth from Chamakh’s unselfish lay off deep into injury time.

Aston Villa fans will certainly be pleased with the spirit their side showed, but with an increasing reliance on the clubs academy graduates, and a difficult run of fixtures in the build up to Christmas, they will feel Houllier’s approach will need to yield points sooner rather than later if they are to avoid being drawn into a festive tussle at the wrong end of the table.