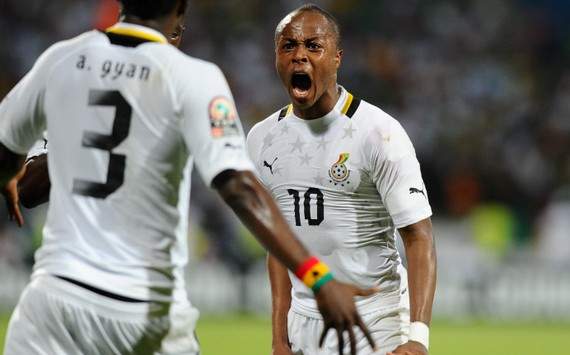 Aymen Mathlouthi’s extra-time blunder cost ten-man Tunisia a place in the African Cup of Nations semi-finals as Ghana defeated them 2-1.

The Étoile du Sahel goalkeeper dropped a harmless cross, gifting Marseille’s Andre Ayew with the ball and he tapped home in the 97th minute to send Ghana through to the last four.  Captain John Mensah headed home from a corner early in the first half for Ghana before Saber Khelifa’s header gave Tunisia the equaliser shortly before the half-time whistle.

Mathlouthi’s mistake means Ghana and not Tunisia will progress to face Zambia in the semi-final on Wednesday.  In the other quarter-final in the competition today Gabon missed out on a semi-final place after losing a penalty shootout with Mali.  Gabon had been leading the game by a solitary goal before a late Mali equaliser put the game into extra-time and then the dreaded penalties.  Mali progressed to face Ivory Coast in the semi-final on Wednesday. 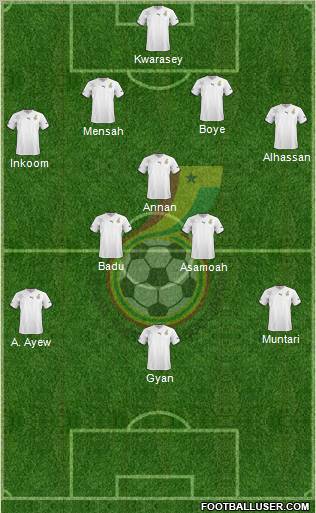 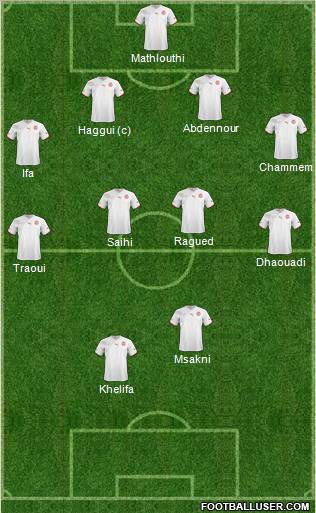 The biggest surprise going into the game was the omission of John Paintsil for Ghana, who had captained the side in the last two games.  John Mensah returned to captain the side at centre-back.  Goalkeeper Adam Kwarasey won his fitness battle and AC Milan’s Sulley Muntari returned to the Ghana starting 11.  Tunisia made several changes to the side that went down 1-0 to co-hosts Gabon in the final group game, bringing back captain Karim Haggui and dropping Isaam Jemaa from up front.  Coach Sami Trabelsi stuck with Saber Khelifa up front with Youssef Msakni playing just off him.

The returning skipper for the Black Stars John Mensah gave Ghana a ninth-minute led over Tunisia after he headed home a corner which had been flicked on at the near post.  The early goal came as a surprise as both teams had failed to settle in the game, but it didn’t matter for the Ghanaians as their players danced away in celebration.

As the game went on Ghana were neither here nor there, happy to just play the ball about in a casual and calm way without getting another goal.  They looked comfortable just seeing out the first half and protecting their one-goal lead.  The Tunisians were lacking in an attacking sense and failed to get service to the forward pairing of Khelifa and Msakni.  However they should have had a penalty in the 29th minute when Khelifa was brought down just inside the box by Samuel Inkoom after a quick free-kick from Msakni gave him an opportunity to run onto the ball.  The referee waived any protests the Tunisians had, as they surrounded the referee led by captain Haggui.

Khelifa: What you can do, I can do better

Three minutes from half-time however Khelifa rose to meet a cross provided by Zouhair Dhaouadi  from the right and head home the equaliser for the Carthage Eagles, injuring his right knee in the process and hobbling off the field for treatment.  On the balance of play leading up to it, the goal was deserved and as the first half came to a close, a draw was the fair score-line.

The second half was a dull affair for the first 25 minutes, both teams trying to wear each other down patiently and showing that neither manager has a gambling trait in their tactical arsenal.  The game started to pick up again however in the 70th minute, started off by a Tunisia throw-in.

Msakni’s shot, deflecting off Ghana’s Vorsah, trimmed the top of the crossbar and was a huge chance for Tunisia, with Ghana breathing a huge sigh of relief knowing the ball had not made its way into the goal.

It was Ghana’s turn for an opportunity to get the lead four minute later.  Tunisia’s stopper Aymen Mathlouthi , man of the match against Morocco, made a fine one-on-one save from the advancing Asamoah Gyan and the ex-Sunderland forward will have been disappointed not to given his side the lead regardless of Mathlouthi making a decent save.

As the game fizzled out it seemed like there was only one destination for the game, and that was extra-time.  With the game at 1-1, the captains tossed the coin and started the first half of the extra-time.

In the 97th minute Andre Ayew was in dreamland when a Ghanaian corner was spilled by keeper Mathlouthi and the ball landed at his feet, where the 22-year-old comfortably slotted home from close range to give them the lead.   It was a horrible blunder from the usually impressive goalkeeper and came at a crucial stage in a tense extra-time.

In the 108th minute, Tunisia’s hopes of getting back into the game were severely dented when defender Aymen Abdennour was sent off for an elbow.  He was shielding the ball from Andre Ayew on the touchline to get a corner and his elbow connected with Ayew’s face, the Marseille player going down.  A fair red card but it has to be said that Ayew had made the most of the contact and that helped in seeing the player sent packing.

As Tunisia pressed for a leveller, the referee was handing out yellows left, right and centre as the players began to lose the head.  A number of flashpoints arose which involved players pushing and pointing fingers at their opponents.  It was not what Trabelsi wanted to see.

Msakni hit the side netting in the last chance of the game as the Tunisians bowed out of the African Cup of Nations at the quarter final stage.  Tunisia will be bitterly disappointed to lose the game with the manner of goal conceded, as they had looked an impressive outfit over the four games in the competition and were a match for the star-studded Ghanaian team.

The 22-year-old winger Andre Ayew got the winning goal for Ghana and gave the Tunisian left-back Chammam a hard time down that flank, using his pace and trickery to get by him and get crosses in.  He had a few good opportunities in the game and will be delighted with his winning goal.  7/10