Pierre-Emerick Aubameyang scored his third goal of the African Cup of Nations as Gabon sealed their place as Group C winners at the expense of a much-changed Tunisia starting XI.

Aubameyang’s 60th minute strike, which took a damning deflection off keeper Rami Jeridi, was enough to see off Tunisia in Libreville.  After a cool through ball from captain Daniel Cousin, the three-goal striker sent the Gabonese home support into raptures as Tunisia coach Trabelsi was made to rue making eight changes to his team.

Gabon, as Group C winners, will now face the runners-up of Group D who play their final fixture tomorrow night.  The runners-up spot will be decided between Guinea and Mali.  Meanwhile for Tunisia, they will face the winners of the group, most likely to be one of the tournament favourites Ghana. 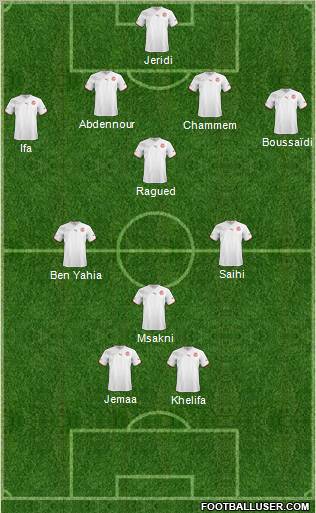 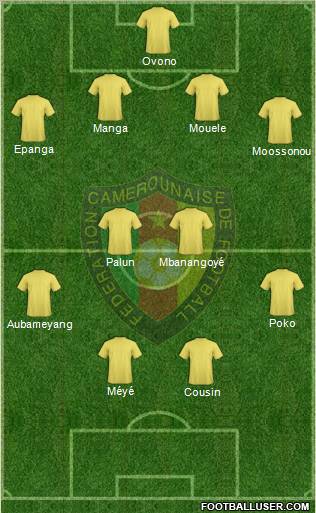 Cameroon logo should not be appearing behind Gabon line-up*

Trabelsi’s Tunisia made eight changes to the team that grabbed an extremely late victory over Niger on Friday, with notable exclusions being the captain Karim Haggui, goalkeeper Aymen Mathlouthi and holding midfielder Khaled Korbi.  Isaam Jemaa, the all-time Tunisian scorer, made his first start of the competition following his winner against Niger having come on for the second half.

There were changes for Gabon too, as coach Gernot Rohr made four changes from their sensational late 3-2 win over Morocco on Friday. Remy Ebanga, Cedric Moubamba, Levy Madinda, and Stephane Nguema came out and Lloyd Palun, Moise Brou Epanga, Daniel Cousin and Bruno Zita Mbanangoye came in.

The first half didn’t set the heather alight with very few chances created in the 45 minutes.  Tunisia started more positively than the co-hosts, proving they were not bothered about the loud and colourful home support’s atmosphere.

Saber Khelifa smacked the side netting after 20 minutes with a powerful left-footed shot from just outside the 18-yard box, but Gabon goalkeeper Ovono was never going to be beaten by the shot.  Khelifa was hoping to make an impression to boss Trabelsi and show he can partner Jemaa up front but failed to open the scoring here.

Towards the end of the first half Gabon started to play a bit, passing the ball well especially in the midfield areas.  However Aubameyang, playing on the right wing instead of up front on his own, wasn’t having much success going forward as he has in the previous two Cup of Nations games against Morocco and Niger.  The Gabonese captain Daniel Cousin, an inspiration against Morocco in the dramatic 3-2 win, wasn’t having the desired effect either as he became frustrated at the lack of service he was being given from Gabon’s midfield.

Aubameyang’s first half frustration was short lived however as he notched the opening goal for the Gabonese on the hour, pouncing on a great through ball from Cousin to fire past the Tunisia keeper Rami Jeridi.  The shot was arguably not one you would expect to find its way to the back of the net, as it appeared Jeridi’s unnatural dive to save the ball actually helped it in.

The Libreville crowd were bouncing up and down and making a tremendous noise, as they have in all of their fixtures in the Cup of Nations competition.  It seemed like the Gabonese felt they had won the cup already, such was the joy emanating from them.

Tunisia rarely threatened afterwards and succumbed to their first defeat of the competition to the co-hosts Gabon.  The Tunisian supporters will feel that if they had fielded their strongest starting 11, like they did in their two wins over Morocco and Niger, then they would have won this game.

Pierre-Emerick Aubameyang netted his third goal of the African continental tournament in this game but actually didn’t impress as much as he did in the first two games against Niger and Morocco.  In saying that, he always looked dangerous with his sheer pace on the right and was probably hampered by the fact that he was sent out to the right wing and not up front on his own.  He managed the winning goal for his country with a smart finish, albeit with the keeper making a strange dive, and sent them to the quarter finals as group winners.  7/10