African Cup of Nations 2012: Tunisia’s March To The Quarters

The group stages have been concluded and the eight teams left are preparing for the quarter finals of the African Cup of Nations.  For Tunisia, their second-place finish in Group C sees them up against Group D winners Ghana.

The Black Stars have won the cup on four occasions with the last one coming way back in 1982, but are one of the tournament favourites alongside Ivory Coast and the Tunisians will have a huge task to qualify for the semi-finals.

African giants Morocco and Senegal didn’t even make out of the group stages, and that has placed Tunisia as one of the favourites.  Shock troopers Zambia won their group, as did giants Ivory Coast.  Co-hosts Gabon and Equatorial Guinea also made the last eight.

In the group stages Tunisia won two out of three games, defeating North African rivals Morocco 2-1 and beating Niger by the same score-line.  Losing to Gabon in the last game meant they missed out on winning the group and playing Mali instead of Ghana.

The Carthage Eagles were an outside bet to be victorious going in to the competition as many big nations missed out on the CAN2012, including Egypt (winners of the last three), Nigeria, Cameroon and South Africa.  Commentators had looked at Tunisia’s squad however and seen a lack of experience and lack of players plying their trade in the top European leagues, unlike many of the other tournament heavyweights.

In qualifying for the quarter final stages, Tunisia and Sami Trabelsi have proved their doubters wrong and despite losing out on first place in the group, they will take on Ghana in plenty of confidence having come away with six points.

In the opening game with Morocco, Tunisia were dominated by their rivals in the possession department, but it seemed that this was Trabelsi’s tactical masterplan all along.  Both of their goals in the 2-1 derby triumph were made through the counter-attack; the first goal made from a free-kick that was won from a bursting run from Zouheir Dhaouadi, the second was a magnificent dribbling piece of skill from the impressive Youssef Msakni.  If it wasn’t for a late Moroccan consolation goal the Tunisians would have come away with a clean sheet.  The opening win gave the whole squad a confidence boost that carried onto the next game.

The second fixture of the group, another 2-1 win, was a difficult task.  They came up against Niger who were hurting after losing the first game to co-hosts Gabon, and the impressive striker Moussa Maazou caused the Tunisian defence all sorts of problems.  It was the first time that captain Karim Haggui and defensive partner Aymen Abdennour were exposed for their lack of pace at the tournament, and the extremely fast and powerful Maazou used this to his advantage.  But in the end, it was Tunisia who got the points thanks to the ever reliable striker Isaam Jemaa’s strike in the last minute.

The third and final game of the group came against Gabon who were ahead of Tunisia on goal difference at the top.  Both teams had already made it through from the group but were vying for the top slot in Group C, allowing them to avoid the Group D winner which was Ghana.  The eight changes that Trabelsi made to the Tunisia team proved to be his downfall as Gabon deservedly grabbed a 1-0 victory to send their passionate home backing into raptures.  Tunisia were not at the races that day and will have to step up. 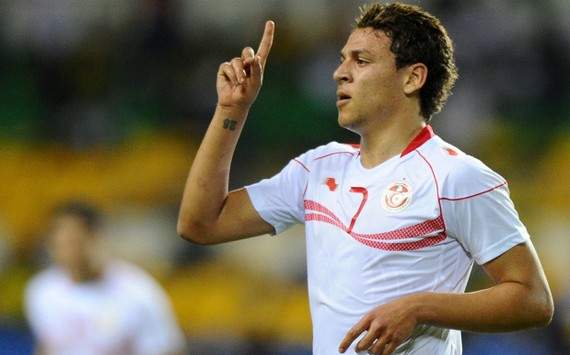 Analysing Tunisia’s three group games, it is fairly simple to see what Tunisia have in abundance and what they lack in the squad.  The 21-year-old Youssef Msakni has been a superb player so far for the Carthage Eagles and will no doubt be talked about for years to come if he develops his potential.  He has scored two fantastic solo goals in the tournament so far, both similar in nature.  Both times he dribbled past several bemused defenders with intense skill, weaving into the box before slotting past the goalkeeper with ease.  The Esperance playmaker will be pivotal in Tunisia’s chances of going all the way, as he has proved he can produce a piece of magic to unlock defences at any time.

Tunisia have a very young squad, with limited experience in their ranks, but it could be an advantage.  So far they haven’t shown their inexperience and have played quite cautiously, relying on the counter-attack whilst sitting rather deep, which has worked in two out of the three games played.  They also look up to the team captain.  Karim Haggui is the most experienced in the squad and has shown to exert his knowledge to the youngsters in front of him.  He may have been shown up for a lack of pace in the Niger game but he can read the game very well and is a regular for Bundesliga club Hannover 96.

With tournament favourites Ghana up next on Sunday, it is without doubt their biggest challenge of the finals to date.  Ghana have an impressive arsenal of talent in their squad, with players from a host of top leagues.  They do however respect Tunisia and know they are up for the quarter-final clash. Ghana’s striking idol Asamoah Gyan echoes this belief, saying:  “It will be difficult against one of the best teams in this competition.  But we will rise to the occasion because with the Ghanaian character, we will always handle the pressure.”

With such a host of top talents like Gyan, Sulley Muntari, Andre & Jordan Ayew and John Mensah the Tunisian coach Trabelsi will have to pull off a shock to get past the Black Stars.  A common tactic for the Ghanians is the counter-attack, so it will be interesting to see how both teams line-up and what tactics are deployed given the similar styles of Trabelsi and his Ghanian counterpart Goran Stevanović.