A History of Fan Protests: From Liverpool to Barcelona 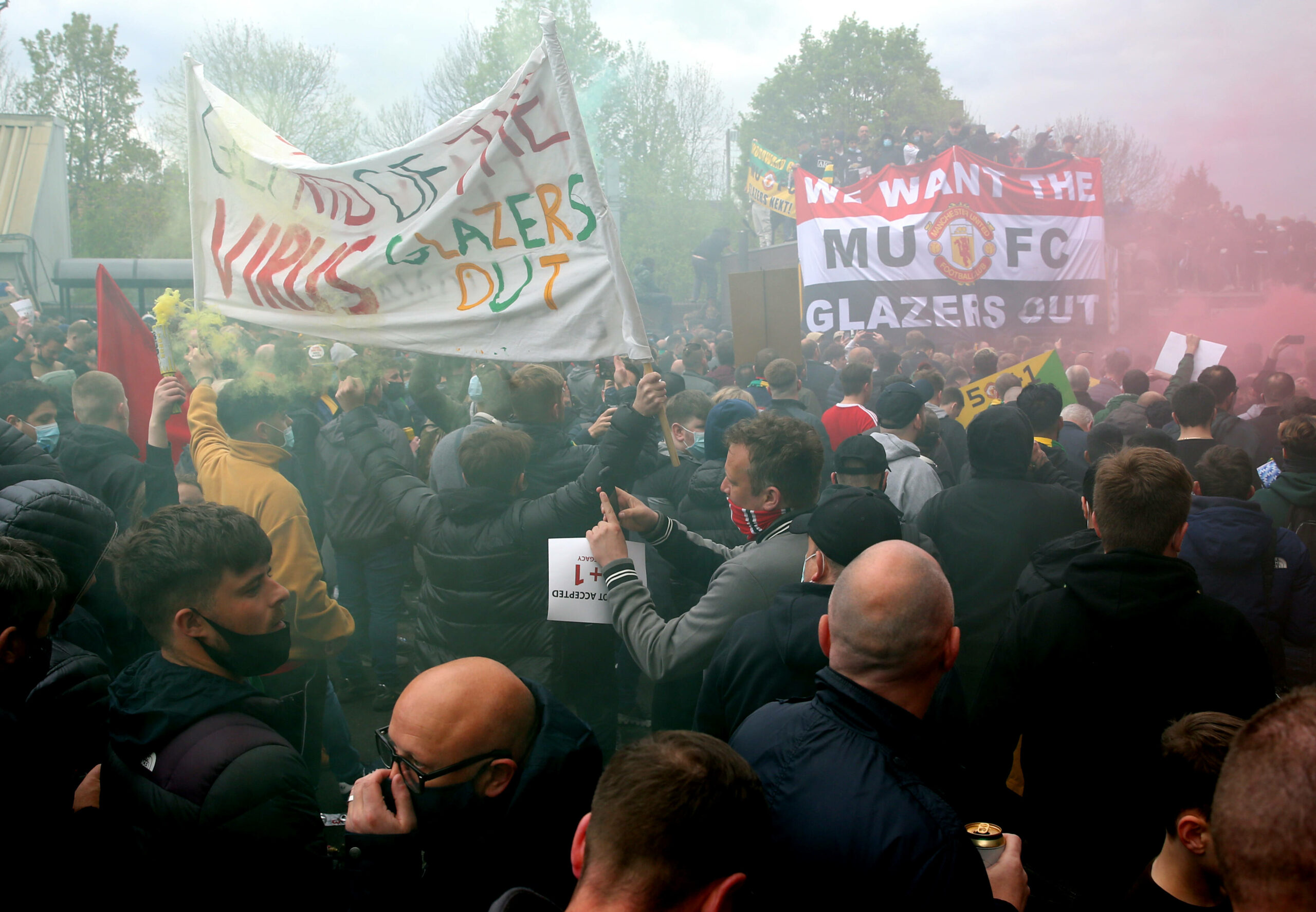 Sunday’s Premier League clash between rivals Manchester United and Liverpool was postponed following fan protests in and around Old Trafford.

Hundreds of United fans let their long-standing hatred and anger for the club’s American owners boil over and stormed the Old Trafford pitch in agitation.

The Glazers’ decision to drag United into the European Super League further aggravated their thorny relationship with the fans. “Get out of our club,” rang high as the green and gold brigade set off flares on the Old Trafford pitch.

In light of recent events, here is a look at some of the most memorable fan protests in the world of football.

In 2016, during Liverpool’s clash against Sunderland in the Premier League, an estimated 10,000 fans walked out of Anfield in protest against ceiling-shattering ticket prices.

Liverpool, leading 2-0 at half-time courtesy of goals from Roberto Firmino and Adam Lallana, saw fans leave the stadium in the 77th minute after the club’s decision to raise the price of some tickets to £77 for the following season in the then-newly constructed Main Stand.

The Reds’ next game, an FA Cup tie against West Ham United away from home, was also marred by protests. Directing hate against the club’s owners, the Fenway Sports Group, fans held banners carrying slogans like “Fenway Sports Greed” and “Fleecing Supporters Guaranteed”.

During Bayern Munich’s Champions League group stage clash against Arsenal at the Emirates Stadium in 2015, the Bavarians concocted a well-strategised protest.

Not happy with the £64 price tag on away tickets, hundreds of travelling supporters boycotted the first five minutes of the game.

“£64 a ticket – But without fans, football is not worth a penny,” read a banner from Bayern fans.

A Bayern Munich fans group called FC Bayern Worldwide, who are believed to be the masterminds behind the protests, took to their Twitter handle and wrote: “If Arsenal want to charge £64 for the cheapest ticket, they can expect quiet stadiums and empty seats. That’s what they’ll get a taste of.”

It is not often seen that home fans of a team applaud opposition fans staging protests in their stadium but a huge segment of the Arsenal contingent at the Emirates were witnessed standing up and applauding the travelling supporters.

Ever since Venky’s, an Indian conglomerate specialising in poultry, took over Blackburn Rovers in 2010, there has been friction between supporters and the club’s ownership.

In 2012, a relegation-threatened Blackburn had to beat Wigan Athletic at Ewood Park to keep their top flight survival hopes alive.

During the game, a chicken was let loose on the pitch by a protesting fan.

Late in the game, Antolin Alcaraz headed the Latics to victory from a corner. With the game finishing 1-0 to Wigan, Blackburn were relegated to the Championship, further straining the relationship between the fans and the owners.

Barcelona fans rise up for Messi

The biggest bombshell in the world of football in 2020 was dropped by Barcelona talisman Lionel Messi who announced that he would not extend his contract but instead leave the Catalan club.

As soon as Messi’s shocking statements came to the fore, thousands of Barcelona fans hit the streets in protest against the Barca hierarchy and club president Josep Bartomeu in particular.

“I am very upset, for me Barca is Messi and Messi is Barca,” an 80-year-old Barcelona supporter rold Reuters.

“They are the same, he is the symbol of Barca … They should erect a monument in Camp Nou. I don’t think this (departure) should be allowed to happen.”

Sport, a daily newspaper, carried the headline ‘Total War!’ in its front page.

Brazil is a country frequently marred by political and social turmoil.

Ahead of the FIFA Confederations Cup and World Cup in 2012 and 2014 respectively, thousands of Brazilians took to the streets and staged protests across the length and breadth of the South American nation.

The reason for such widespread protests was the Brazilian government’s use of tax payers’ money on stadiums for the World Cup rather than housing, medical and other social causes.

“The Brazilian authorities must, without delay, investigate why excessive force was used against peaceful protesters, bring those responsible to justice and ensure this does not happen again,” said Atila Roque, director of Amnesty International Brazil.

Protests even continued during the World Cup that saw Brazil demolished 7-1 in the semi-finals byeventual winners Germany.

Match-fixing: When 7 Manchester United and Liverpool players were handed lifetime bans
2021 FA Cup Final: Over land and sea (and Leicester)