Apertura Expected To Be Another Cracker!

Supporters of the Argentinian Primera Division have been given some amazing entertainment over the past few years with one of the most open and unpredictable leagues in World Football. The Argentinian top flight is split into two sections, the Apertura (Opening) and the Clausura (Closing). In the Apertura, each team will play each other once and in the Clausura the return fixture is played. The overall points total is added together and relegation is based on the final averages. It may seem strange to us British fans but this system is used in a number of South American countries. Banfield as Champions in Apertura 2009

In recent times, we have seen Velez Sarsfield, Banfield and Argentinos Juniors crowned Champions of Argentina and we have seen Estudiantes La Plata named undisputed champions of South America. The ‘big two’, Boca Juniors and River Plate have struggled in recent years and their demise has opened the door for the other clubs to blossom on the park.

Boca Juniors appointed Claudio Borghi as their new manager this summer after his success at Argentinos last season in which they won the Clausura championship. Borghi managed to stumble over the first difficult hurdle of keeping star men Palermo and Riquelme. Their start to the season has been a fairly rough one with La Azul y Oro sitting in 12th place after 6 games. Their big rivals River Plate have been boosted by the return of Diego Buonanotte at the end of last season and the excellent form of striker Rogelio Mori which has seen River make a positive start to their campaign. Manager Angel Cappa took minnows Huracan to a final-day title decider and was minutes away from winning them a first-ever championship. Neither side has won the Argentinian league for over 3 years and it will be very difficult for them to do so this term but I think River have an outside chance under Cappa who has made them a strong unit with plenty of attacking flair in Buonanotte, Ortega and Affranchino. 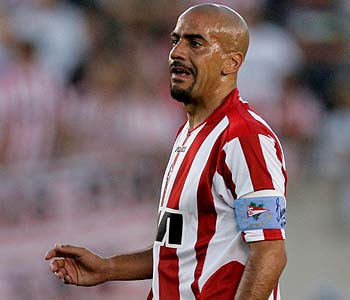 Juan Veron is in fine form for Estudiantes

Many pundits in Argentina tipped Estudiantes to lift the Argentinian title after what has been a successful few years for them with triumphs in the Copa Libertadores. The familiar face of the side is the influential captain Juan Sebastian Veron who has excelled since his return to La Plata. Estudiantes have coped surprisingly well with the sale of goalscorer Mauro Boselli and have proved they have goals throughout the side with 7 different scorers netting their 7 goals this campaign. Estudiantes sit top of the league so far, joint with Velez and River and on paper have the strongest side with Leandro Benitez, Enzo Perez and Veron who were key to their Libertadores success last season.

Maxi Moralez is one to watch for Velez

Velez Sarsfield will be hoping that the talented front-pairing of Santiago Silva and Juan Manuel Martinez will finally produce the goods after a fairly poor season last year. Santiago Silva was Banfield’s shining light when they picked up the title and this tempted Velez into spending over £1m to sign the Uruguayan hitman. Leandro Somoza and Maxi Moralez provide some fluent attacking play and Moralez in particular has attracted some recent interest from European clubs.

The three clubs at the top of the table on 13 points will likely be the ones who will lead the way for the majority of the season but San Lorenzo and surprise package Arsenal de Sarandi are just behind and will be hoping to take advantage of any slip-ups from the top sides. Estudiantes were my tip this summer aswell after a stunning Copa Libertadores triumph last year and have always underachieved in the domestic league.