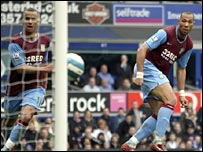 Â Villa came away from a rainsweptÂ GoodisonÂ ParkÂ with a much needed point as the race for a Uefa Cup place lives on for another week.

Everton began stronger but Villa had the only real chance of note in the first half. A clever Ashley Young free-kick beat Tim Howard but came back off the bar.

Early in the second half, Yakubu broke free on the left, he pulled a low cross back which missed its target of Johnson only to be met by Phil Neville’s right boot and a wicked deflection off Laursen took it past Carson into the Villa goal.

Villa threw Berger and Harewood on in an all out attacking formation and a Gareth Barry corner was met by the boot of Agbonlahor for 1-1. With 6 minutes remaining Carsley fed Yobo at the back post who volleyed home superbly and seemingly handed Everton 3 points and a Uefa Cup spot.

Immediately from the re-start Villa’s ‘never say die’ attitude lived again. Barry was given the freedom of Merseyside and he cooly delivered a left foot ball, inch perfect onto John Carew’s head levelling the match again.

VillaÂ entertain Wigan on Saturday before Everton visit Arsenal on Sunday. As the KlaxonsÂ say, ‘its not over yet’