Italy say their Goodbyes and Welcome Back…. 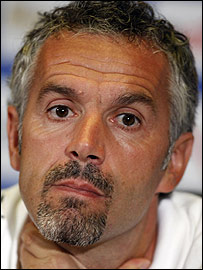 Italian Fa President Giancarlo Abete and Roberto Donadoni are expected to part ways in the coming days. Donadoni led Italy to the Quarter-Final phase against Spain where the Azzurri ultimately bowed out on penalties. Reports were already evidently saying that if Italy were to be knocked out against Spain, Don would be fired. Donadoni had Cannavaro, Barzagli, Gattuso and Pirlo all unavailable for the match against Spain and eventhough he had such important players unavailable he still figured out a way to hold off the Spanish threat.Â  Donadoni is hopeful of staying as Italy coach and guiding them to success at South Africa. He merits credit. Yes he did some bad decisions and in my opinion, after seeing Toni failing to hit the back of the net in the previous group stage matches against Holland, Romania and France, he should have subbed him against Spain and give another player the chance to give Italy the lead. He kept his faith in Toni all along and with the Bayern striker having problems making friends with the ball, Donadoni paid the price for selecting Toni. The chances of Donadoni staying as Italy coach are nearly 0 but surprises can happen as Donadoni seems to be extremely loyal to the Italian FA saying that he would not take any compensation from the FA if he was to be given the sack before his contract expired.

â€œI said no to President Giancarlo Abeteâ€™s proposal on the day that I agreed the new deal,â€ Donadoni explained.

â€œFinancial matters donâ€™t concern me. If he doesnâ€™t want me to be the Coach any longer I will leave without asking for anything.â€

A Welcome Back To World Cup Winner is Probable

Former Juventus coach Marcello Lippi, the man behind the 2006 World Cup for Italy seems much to be returning back as Azzurri Coach. He did not deny any speculation about this and it was expected. Lippi resigned after the World Cup due to amount of pressure made on him especially after the Calciopoli crisis in Italy. No wonder Lippi did not take reign at a club during these two years. So was he counting on Donadoni’s failure? Counting on it or not makes no changes now. Marcello Lippi is expected to take the hot seat after the FA part company with Donadoni.

How Spain Dumped Italy: Penalties in Video
Toni: My Bad