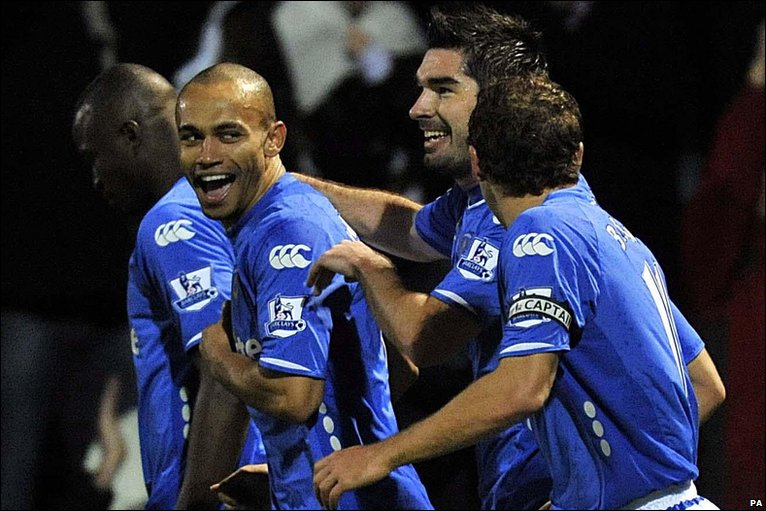 Portsmouth had to rely on substitute striker Danny Webber to rescue a 1-1 draw with relegation rivals West Ham.

The home side may have earned a hard-fought point, yet at the same time, it will feel like two points lost. Last night was a perfect opportunity for the Blues to close the gap between them and Hull City, yet Avram Grant’s side have failed to take advantage.

The Hammers took the lead through a fortuitous Matthew Upson goal early in the second half, with Younes Kaboul’s headed clearance reaching as far as Upson’s chest.

By Portsmouth’s viewpoint, it was an unfortunate goal to concede, yet the truth is West Ham had a number of opportunities to take the lead in the first half, if it were not for the heroic goalkeeping of Asmir Begovic.

It was a bitterly cold evening, with fans doing their best in the early exchanges to keep warm.

Inexperienced striker Frank Nouble had the first opportunity of the game, being set-up in a one-on-one situation with Begovic, only for the Bosnian to produce a stunning point-blank save.

Portsmouth hit back immediately through the most unlikely player. Midfielder Aaron Mokoena was given enough space in front of goal to produce a low drive destined for the corner of Robert Green’s net, until Green showed his agility to palm the ball away.

Nouble then got the better of defender Marc Wilson as he was allowed to produce powerful shot heading for Begovic’s corner, only for the ‘keeper to defy the odds once again and produce yet another stunning save.

He looked unbeatable and only capable of conceding in bizarre circumstances, which is exactly what happened near the start of the second-half.

On 52 minutes, Diamanti’s cross was challenged for by Kaboul, who could only watch on helplessly as his header ricocheted off the unsuspecting Matthew Upson, seeing the ball loop over the unknowing Asmir Begovic.

Wilson had the perfect opportunity to put Portsmouth level when he headed over from six-yards when really, it looked easier to score.

Pompey upped the pressure and then went close once again through Kevin Prince Boateng. John Utaka’s low cross wandered aimlessly along the six-yard area before falling to the former Tottenham midfielder. Whilst he had enough time to take a first touch, he struck immediately and thus felt the consequences, as his shot powered into Green’s side-netting.

Grant suffered a further blow when striker Frederic Piquionne went off injured, forcing the substitute appearance of Danny Webber, which would turn out to be masterstroke.

Within a couple of minutes, the former Manchester United trainee was able to spring West Ham’s offside trap and poke the ball through the legs of ‘keeper Robert Green. It was his first Premier League goal for the club, and it came at a crucial time.

Portsmouth struggled to create any more chances with what was left of the game, though Utaka strived through the West Ham defence to produce a stinging shot which Green did well to save.

I’ve never felt so dejected leaving a game before and now wonder how and when we’ll be able to pick up points in this league. While Grant remains ‘resolute’, fans remain concerned and unsure of the future that lies ahead.