Portsmouth could potentially feature a bench tonight of just three substitutes, due to injuries and the African Nations Cup taking its toll on Avram Grant’s squad.

Striker David Nugent has returned from a three-month loan spell at Burnley, but will be unable to feature in tonight’s fixture. It is thought he is close to sealing a permanent move to Turf Moor over the next few days.

‘Keeper David James remains missing from the squad due to his near completion of a loan move to Stoke City. However, The News report today that the England international has suffered a further setback, suffering from a new calf injury. Yet CEO Peter Storrie remains confident the 39-year-old will be able to complete his move.

The phantom signing, Mike Williamson, is close to ending his Portsmouth nightmare with a permanent move to Championship side Newcastle United and thus will not feature.

Angelos Basinas is likely to start due to the injuries suffered by Michael Brown and Papa Bouba Diop against Sunderland on Saturday.

England hopeful Carlton Cole is back in West Ham’s squad, as the Hammers hope to put on a good performance for new owners David Sullivan and David Gold.

Portsmouth, who sit bottom-of-the-table, remain five points behind West Ham in the league, with tonight’s tie labelled a ‘must-win-six-pointer’. 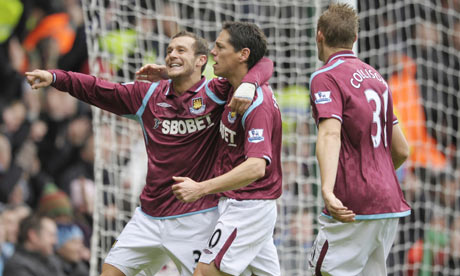