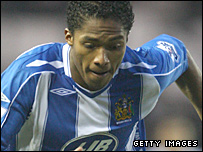 Antonio Valencia completed his transfer to Wigan Athletic in January of this year. The fee was undisclosed and was a three and a half year deal making him a Wigan man until the summer of 2011.

Valencia had been on loan at the JJB from Villarreal since the previous year.

The Ecuadorian winger has a fine right foot and his pace allows him to beat defenders with almost ease. He has the ability to pick out targets and could solve Villa’s right sided problem and give the team more balance as the majority of their play this season has been down the left through Ashley Young.

Valencia has played 26 times this season in league and cup scoring one goal.