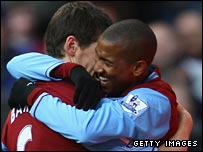 Winning ways returned to Villa Park yesterday in spectacular style. It was the perfect result after last weeks reverse at Old Trafford by the same scoreline.

Bolton threatened early on with Helguson failing to capitalise on a Mellberg error.

Villa took the lead inside 10 minutes. Ashley Young beat Davies on the Villa left and neatly crossed the ball to Barry who headed past Al Habsi in the Bolton goal.

Bolton had Gary Cahill and Gavin McCann making their Villa Park returns and Cahill was unlucky not to get on the end of a Bolton corner afterÂ a mistake from Carson.

Villa double their advantage on 56 minutes with one of the goals of the season. The move started in Carson’s hands and ended up in the Bolton net without the visitors touching the ball. Carson fed Bouma who laid it into Carews feet, he fed Ashley Young who played a first time ball into the feet of the on-running Barry, another first time ball was inch perfect onto Agbonlahor’s boot giving him his first goal of the year.

A deflected Barry goal made it 3 and super-sub Marlon Harewood completed Bolton’s misery inÂ  the dying stages with a free header from a Gareth Barry cross.

It was a much needed performance from Gareth Barry who’s form at club level this season has slipped ever since his England call up. This was the Barry that Villa fans know and love. And with Villa heading to Derby next week is fifth spot really out of the question?